Does an amphichiral knot admit roughly twice as many knot diagrams of a given crossing than a chiral knot?

Recall that a knot is amphichiral (or achiral) if there is a continuous deformation of the knot into its mirror image.

I'm interested in knowing when and whether we can use approaches like Stockmeyer counting to estimate and distinguish different knots. For example suppose that for most knots of grid dimension $d$, the total number of grid diagrams isotopic to a given knot is $\mathcal O(n)$. Then given two knot diagrams/grid diagrams $K_1$ and $K_2$ we can perform random Reidemeister moves on either $K_1$ or $K_2$ (allowing for a small increase in the grid dimension if needed), and hash the grid diagrams to do the counting. If $K_1$ and $K_2$ represent two distinct knots then there might be double $\mathcal O(2n)$ the number of such grid diagrams than if $K_1$ and $K_2$ represent the same knot.

Nonetheless if there's a sequence of such moves that transforms $K_1$ into a mirror image $K_2$ then the provided knot is amphichiral. But do we have any intuition on whether this would then mean that Stockmeyer counting would still say that the total number of grid diagrams of $K_1$ and $K_2$ together are twice as much as the total number of grid diagrams of another random knot $K_0$ of the same grid number $d$?

I suspect this is not the case (although I don't have a proof of a formal statement). My heuristic is as follows. Start with a diagram $D$ for $K$ which is the same as its mirror. For negative amphichiral hyperbolic knots you can always find such a diagram (here is one for the figure eight knot - the symmetry is rotation around the marked point, then reflection across the plane of the diagram). 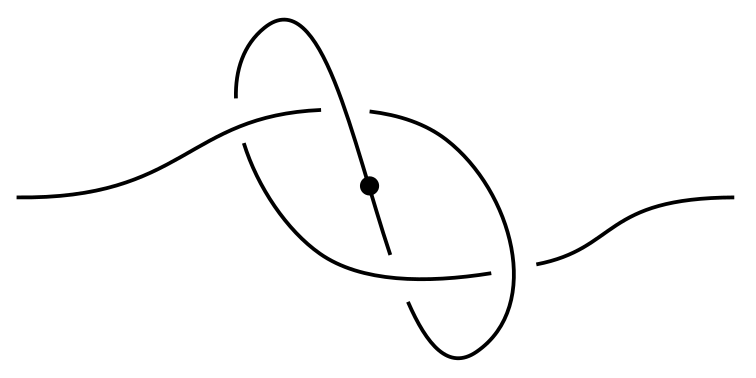 Now suppose you perform some Reidemeister moves to obtain a new diagram $D'$. Then indeed there is another diagram $D''$ for $K$ which is the mirror of $D'$, but since it can also be obtained from $D$ by a symmetric sequence of Reidemeister moves, we will already have counted it.

For positive amphichiral hyperbolic knots I think there is a similar heuristic; I'm not sure about satellite knots.

22
Are there moves between Reidemeister moves?
6
When is a connected sum of torus knots a slice knot?
11
Number of the Reidemeister moves needed to transform one diagram into another one
11
Knot diagrams, sets of moves and equivalence relations
7
Is there a combinatorial version of PL ambient isotopy in dimension $>3$?
8
Is this knot invariant already treated somewhere in the literature?
14
Does Lackenby's polynomial bound on knot moves imply polynomial mixing in "Quantum Money From Knots?"
4
Can different knots have the same numbers of quandle colorings for all quandles?
Question feed