First use of term “Hilbert's Nullstellensatz”

The post below first appeared on hsm.stackexchange over a week ago and has received no answers there yet, so by now I think it is okay to ask it here.

This year (2021) marks the 100th anniversary of Emmy Noether's 1921 paper in which she introduced Noetherian rings and proved the primary ideal decomposition for them. The original version of her paper is here and an English translation is on the arXiv here. She of course does not call rings "Noetherian" but instead refers to rings satisfying "the finiteness condition" (die Endlichkeitsbedingung). When referring to results of Hilbert that we'd call Hilbert's basis theorem and Hilbert's Nullstellensatz at the start of Section 10 of the paper, she writes "Hilbert’s Module Basis Theorem" (Hilbertschen Theorem von der Modulbasis) and "a famous theorem of Hilbert’s" (... eines bekannten Hilbertschen Satzes). In two footnotes on this page she also refers to "Hilbert's theorem" instead of the Nullstellensatz.

The Nullstellensatz was published by Hilbert in 1893 here (see the theorem starting on the bottom of p. 320), and that was nearly 30 years earlier. I am surprised that Noether refers to that result simply as "Hilbert's Theorem". Thus my question:

I think it is indeed van der Waerden, but in the earlier paper [1926], where he sounds just like one does when introducing terminology: translated from p. 143,

the proposition in question is an almost immediate consequence of two fundamental propositions of HILBERT, which can be referred to as HILBERT’s Nullstellensatz and HILBERT’s Basissatz.

An extra twist is that this all presumably first appeared in Dutch, in a first version [1925] of the paper that would be interesting to find and check; it doesn’t seem to be online.

Below is the Dutch paper mentioned by Francois Ziegler; This paper did indeed appear before the 1927 paper mentioned in the OP, but Van der Waerden does refer to that forthcoming publication in a footnote; I translate:

$^{5})$ Hilbert assumes that $\Omega$ is the field of complex numbers; his proof actually holds more generally. For a different proof see my forthcoming paper in the Mathematische Annalen entitled "Zur Nullstellentheorie der Polynomideale".

The Mathematische Annalen paper was submitted 14 August 1925, while the paper below was read at the Netherlands Academy on 28 November 1925, which explains why Van der Waerden could refer to former as a an earlier work. 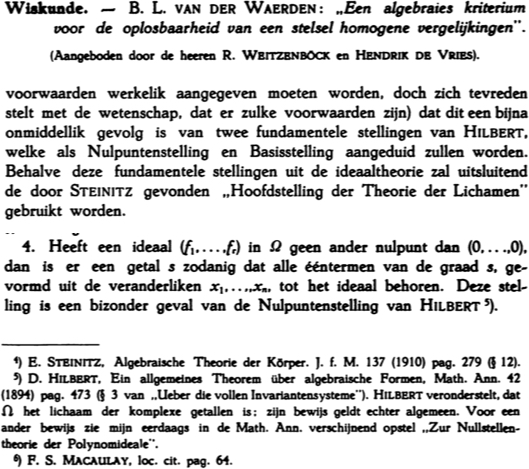 [source] -- only accessible online from a US IP number.

Share
Improve this answer
edited 10 hours ago
answered May 2 at 19:58

Not the answer you're looking for? Browse other questions tagged ag.algebraic-geometry ho.history-overview or ask your own question.

13
When did the term “Lie group” first appear?
3
First reference to the term “Weierstrass equation” in elliptic curves
14
Who first resolved Hilbert's 20th problem?
35
Hilbert's Hotel
22
Has anything (other than what is in the obituary witten by M. Noether) survived of Paul Gordan's defense of infinitesimals?
8
Earliest use of the term “Galois extension”?
19
Is Van der Waerden's conjecture really due to Van der Waerden?
2
Application of Zariski's Lemma other than Hilbert's Nullstellensatz
Question feed