Suppose we have a vector field determined by a rational function, of the form $$ R(z) = \alpha i z + \sum_{j=1}^k \frac{c_j}{z-r_j} $$ where $\alpha \in \mathbb{R}$, and the other constants are in $\mathbb{R}$. That is, for each point $z \in \mathbb{C}$, $R(z)$ gives a complex number which we interpret as a vector. Note that with this particular choice, the integral curves, (curves following the field), look almost like large circles far away from the origin. This is due to $\infty$ being neither repelling nor attracting (since $\alpha \in \mathbb{R}$). See the attached figure for an example. 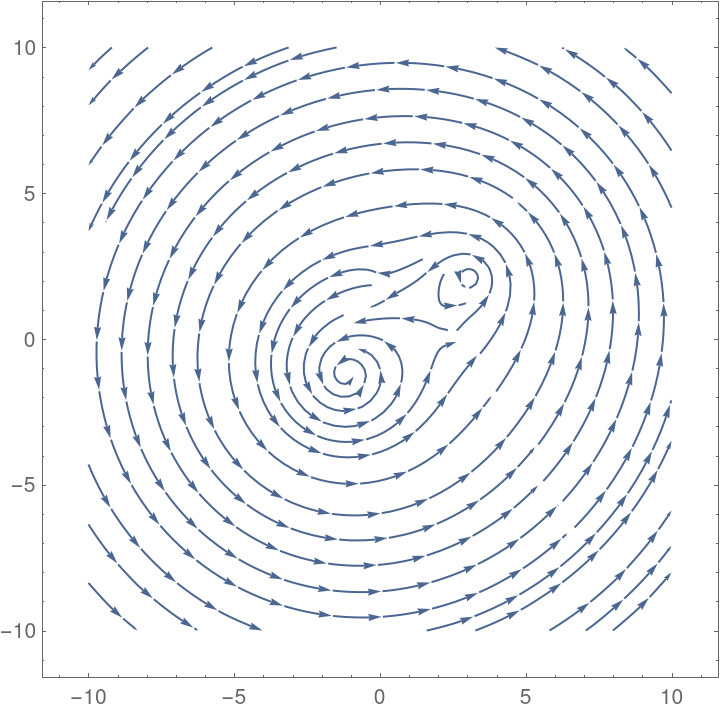 Suppose now we have a closed integral curve $\gamma$, where all zeros and poles of $R(z)$ are in the interior. Let $\gamma_0$ be the smallest (intuitively) such integral curve.

Far away from the origin, $\gamma$ is more or less a circle, and thus convex. Now, as we 'shrink' $\gamma$, at some point (as in our figure), the integral curve cease to be convex.

Now, as $\gamma$ shrinks and gets more similar to $\gamma_0$, we go from convex to non-convex.

Is it possible that we go from non-convex back to convex again?

Browse other questions tagged cv.complex-variables rational-functions or ask your own question.