Quasiconformal map from a subset of $\mathbb{C}$ to a polytope

Question. Does a quasiconformal map exist between a subset of $\mathbb{C}$ (such as a unit disc or rectangle) and a polytope?

Here, I take a polytope to be a two-dimensional surface that could be embedded in $\mathbb{R}^3$ or some other three-dimensional space, possibly $\mathbb{H}^3$.

In particular, this question interested me as it would offer a method to parameterize a permutohedron with the complex plane. The premise of this question was inspired by Dantzig's method, a numerical optimization technique in linear programming that can be realized as a path along the edge of a simplex.

By segmenting $\mathbb{R}^3$ into a series of planes and applying a Schwarz-Christoffel transform on each, I was able to form an injective map from the unit disc to polytope in three dimensions; however, I do not believe it is quasiconformal. As a secondary question, does anyone know if any such mapping could preserve the holomorphicity of a function on $\mathbb{C}$?

Edit (Clarification): Could it be possible to make a quasiconformal or conformal map from a disk in $\mathbb{C}$ to the following polytope? 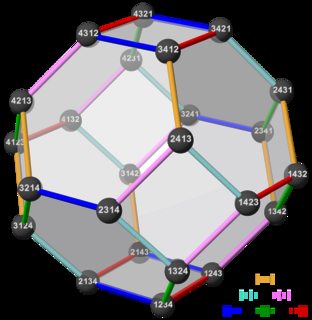 Yes, there exists a quasiconformal map (even a homeomorphism) from the Riemann sphere to a polytope. Embedding to $R^3$ is irrelevant here, all we need is the intrinsic metric, which is a flat metric with conic singularities. Consider a conic singularity with angle $2\pi\alpha$. Map a neighborhood of $0$ onto a neighborhood of this point by the map which has representation in local coordinates: $f(z)=|z|^{1-\alpha}z^\alpha$. This map is quasiconformal. Define such maps in neighborhoods of all singularities. Then extend it to the whole sphere smoothly.

Not the answer you're looking for? Browse other questions tagged dg.differential-geometry cv.complex-variables complex-manifolds polytopes quasiconformal or ask your own question.

14
Two discs with no parallel tangent planes
1
Ahlfors' proof of Locally K-Quasiconformal to K-Quasiconformal
2
A Fact Of Quasiconformal Map
0
quasiconformal across the real line
13
How to interpret Gauss's late fragments on conformal mapping of the interior of an ellipse (to the unit disk) in modern mathematical terms?
2
Holomorphic maps from upper half plane to itself (or equivalently Poincare disc to itself)
6
Quasiconformal maps in arbitrary dimensions
Question feed