In Chapter I.9 of Chandler-Magnus "The History of Combinatorial Group Theory", a number of important mathematicians in the early history of the development of group theory and sources for their obituaries are given. For example, we certainly find an entry Dehn, Max, 1878-1951. For other names, less information is known, such as Pick, G., 1859-1943(?). This latter question mark reflects the fact that Georg Pick died in the Theresienstadt concentration camp in 1942, and finding this information might have been difficult at the time of the writing of the book (1982).

All names in this list have a source for where their obituary may be found, and at least one of a birthyear or death year is present -- except for one name. This name is listed simply as H. Vogt: ?-?., with no further information. Curiosity piqued, this gives my question:

Who was H. Vogt? What were his mathematical contributions?

Here's the clues I've got this far. The most relevant piece of information is the following paper:

This paper is the only paper cited by Chandler and Magnus for Vogt, and is hence the only publication I am certain is by the desired H. Vogt. It also appears to have been his Ph.D. thesis. No result can be found on Mathematics Genealogy matching this.

There are a number of matches on MathSciNet for publications by an H. Vogt; the earliest is from 1879, by a Heinrich Vogt, and this could in principle be the same H. Vogt as above. The latest that could conceivably be by our H. Vogt is from 1923 -- this is again on differential equations, so seems very likely to be by the same author!

One idea is that H. Vogt could possibly be related to (father of?) Wolfgang Vogt, a young German mathematician whose last paper was in 1914, and who may well have perished, as did so many other young German academics at the time, in World War 1, such as Werner Boy, of Boy's surface fame, and Hugo Gieseking. The topic of his 1906 Ph.D. thesis seems -- at least on a surface level -- somewhat related to what H. Vogt did, especially if some of the other publications on MathSciNet were by the same H. Vogt.

A short necrology of Henri Gustave Vogt can be found here:

His 1924 discourse on Henri Bazin here:

Some comments on his entry in the Académie de Stanislas in 1921 are here:

He has received the Légion d'Honneur:

His "acte de naissance" says that his correct name is "Henry Gustave". He is the son of Jacques Georges Vogt and Charlotte Gabrielle Cavelier.

The last document in the Légion d'Honneur file contains a short biography!

Here comes a photography as a young student in 1881: 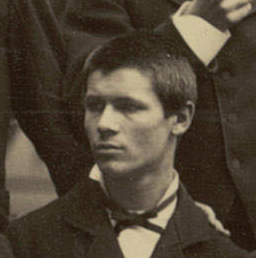 I have got a scan of the front and back pages of his PhD thesis, where we learn that

I would be tempted to deduce that Appell was his advisor.

According to Zentralblatt (which is freely accessible on Internet, since Jan 1, 2021, btw) Henri Gustave Vogt was a mathematician, apparently French, since he wrote in French, published in French journals, and his first and second names use French spelling, though his last name hints German origin.

In Zentralblatt, we find 28 publications, including 14 books, beginning in 1889.

His by far most famous paper is the one you mention. See also

William Goldman, An exposition of results of Fricke and Vogt, arXiv:math/0402103.

for a modern exposition of this paper.

26
Biographic Data/Stories about André Néron
4
History of the Odd Dimensional Quantum Spheres
11
What is so "plactic" about the plactic monoid?
23
Who introduced the terms "equivalence relation" and "equivalence class"?
17
History and motivation for Tannaka, Krein, Grothendieck, Deligne et al. works on Tannaka-Krein theory?
17
Brandt's definition of groupoids (1926)
6
Was Cauchy prescient?
18
Young's natural representation of the symmetric group
58
How did Lefschetz do mathematics without hands?
64
Who is the "young student" André Weil is referring to in his letter from the prison?
Question feed