The behavior of $a_n$ (these are the $[a_0,a_1,\dots]$ in the continued fraction expansion of $x_0$) is very chaotic for most numbers, but if you replace $\alpha$ by a value lower than $1$, it seems that the coefficients $a_n$ are bounded, or at least their expected value is not infinite anymore. The equilibrium distribution for $(x_n)$ if $\alpha=\lambda=1$ is well known and equal to $$F_X(x)=\log_2(1+x), \mbox{ } \mbox{ } \mbox{ } \mbox{ } 0\leq x \leq 1.$$ All this relate to ergodic, chaotic dynamical systems associated with numeration systems, the base-$10$ system being based on the tenfold map, while the system described here is based on a generalization of the Gauss-Kuzmin-Wirsing operator (see here and here). The coefficients $a_n$'s are called the digits.

I am wondering is this could lead to interesting results about approaching irrational numbers by other rational or irrational numbers. For instance, if $\lambda=1,\alpha=9$ and $x_0=\pi-3$, you get, with just one iteration,

correct to $9$ digits. Also, what are the conditions for convergence? What are the conditions on $\alpha,\lambda$ so that the $a_n$'s are bounded or have finite expectation? Is there a simple expression for $F_X(x)$ or its derivative (the density) $f_X(x)$ when $\lambda\neq 1$ or $\alpha\neq 1$?

Update on 2/17/2021: I provided a way to iteratively solve the functional equation to find the equilibrium density, see the last section in my answer.

My answer applies to standard continued fractions $x_0=[a_0,a_1,\dots]$ corresponding to $\alpha=1$, as well as to the full general case. As stated in my original question, the $a_n$'s are called the digits of $x_0$ in the continued fraction system (actually, continued power if $\alpha\neq 1$). The following is true for all normal numbers $x_0$ in that system, with the definition of normality being a generalization of the concept as we know it in base $10$ or base $2$. All numbers $x_0\in[0,1]$ but a set of Lebesgue measure zero, are normal in the continued power numeration system. Yet the set of non-normal numbers is dense.

That said, let's now answer my question. The theoretical distribution $D$ of any digit $a_n$ of any normal number $x_0$ in the power system, satisfies the following:

The correlation between successive digits thus exists if $\alpha<\frac{1}{2}$.

Proof of the main result (sketch)

Let $X$ be the random variable associated with the equilibrium distribution of the sequence $(x_n)$. We have

$$E(D)=\int_0^1 \frac{\lambda}{x^\alpha}f_X(x)dx - \int_0^1 \Big\{\frac{\lambda}{x^\alpha}\Big\}f_X(x)dx$$ where the curly brackets represent the fractional part function. The rightmost integral is finite, and the left one is infinite only if $\alpha\geq 1$. Now we proved the third result. A similar argument can be used to prove the last result. Note that for continued fractions ($\alpha=\lambda=1$) the distribution of $D$ is known exactly, and verifies all the properties 1-4 listed above.

In particular, if $\alpha=\lambda=1$ (the standard continued fraction), it is easy to verify that $f_X(x)=\frac{1+x}{\log 2}$ satisfies the above formula and is thus the density associated with the equilibrium distribution. This is a well known result, and the proof provided here is probably one of the shortest ones.

We can use the above formula to implement a fixed point algorithm that converges to the density $f_X$, starting with $n=0$ and a uniform density $f_0$ on $[0, 1]$, and using the following recursion:

In practice, using the first few hundreds terms in the infinite sum, and using a few thousand values of $x$ evenly spread in $[0, 1]$, provides a good approximation to $f_X(x)$ in only $3$ or $4$ iterations. In the cases tested, convergence occurred when $\lambda\leq 1$. The chart below shows the first $4$ iterations with $\lambda=\alpha=1$. In that case, the theoretical $f_X$ is known and represented by the red curve in the figure below. The black line is the initial uniform density $f_0$ on $[0, 1]$. The green curve corresponds to $f_1$, the grey one to $f_2$, and the orange one to $f_3$. The orange one is very close to $f_X=f_\infty$: one can barely distinguish it from the red curve. 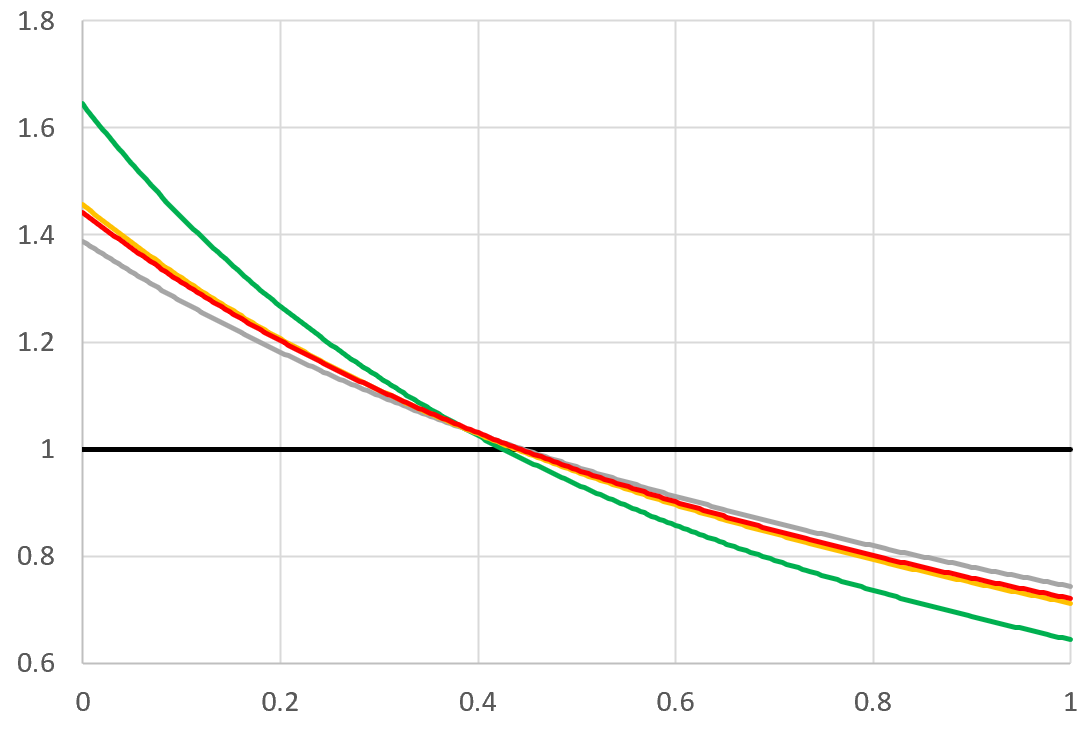 A Perl script for the fixed point iterations is available here. Note that there are infinitely many solutions to the functional equation (multiples of each other), but there is only one that is a density, that is, integrating to $1$.