But is this really true? Or is there a real-world application in which $\sin(\sin x)$ occurs? Or maybe something a bit more general, like $\sin(C \sin x)$ for some constant $C \neq 0$?

The intensity of light diffracted at a slit as a function of the angle actually involves a term $\sin\left(\frac{\alpha\beta}{2}\sin(\theta)\right)$, see

(I'm no physicist at all, but this has been stuck in my head since high school just because it is such an unusual term to encounter naturally)

Since $\sinh(x) = i\sin(i x)$ is the odd part of the exponential function, we can interpret it (for example within the framework of combinatorial species) as the (exponential) generating function for sets of odd size.

Thus, $\sinh(\sinh(x)) = -i\sin(\sin(ix))$ is the (exponential) generating function for set partitions with an odd number of parts, each of which has odd cardinality.

We can slightly refine this by interpreting $\sin(\omega\sin(x))$ as the generating function of a weighted species, giving each set partition the weight $(-1)^{n-1} w^b$, where $b$ is the number of blocks and $n$ is the size of the ground set.

People in complex dynamics consider the behavior of all sorts of functions under iteration. For example, here is the Julia set of $\sin(z)$.

A frequency-modulated (FM) signal (like those used in FM radio), with a sinusoidal input, can be represented as

If you decompose (1) with the usual trigonometric identity for the sum of angles you get the term $\sin(\beta\sin \omega_\mathrm{m}t)$. This decomposition can be expanded in a Fourier series with coefficients generated by Bessel functions, thus obtaining the spectrum associated to the FM signal.

I think Carlo Beenakker's comment deserves to be upgraded to an answer:

Bessel functions have integral representations involving such iterates of trigonometric functions. For example, $$ \int_0^1\sin(x\sin(\pi t))dt=\mathbf{H}_0(x) $$ is the zeroth Struve function, one in the crowded family of various Bessel and Bessel-like functions.

The characteristic function for the Poisson distribution is given by

Just another cw, in way of an illustration: level plot for modulus and argument of $\sin(\sin(z))$ in the complex plane 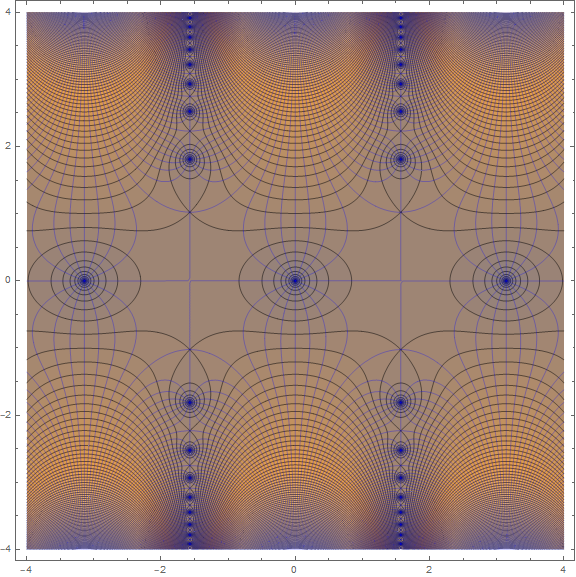 (Thanks to Michael E2 from Mathematica.SE for helping out with the plot)

Valerii Salov, in Notation for Iteration of Functions, Iteral, has written a 23 page (!) paper on how to denote the iteration of a function, specifically for the issue raised by the OP in Inevitable Dottie Number. Iterals of cosine and sine.

The notation proposed by Salov uses the first Cyrillic letter И of the Russian word Итерация for iteration, as a variation on the product symbol $\prod$, so that И$_v^n f$ is the n-fold iteration of the function $f(x)$ for initial value $x=v$.

Some examples of the use of this compact notation:

This can be typeset in MathJax as a LARGE version of Unicode character 1048:

9
Applications of Euler-Cauchy ODEs
9
Estimate for tail of power series of exponential function?
26
Criteria for boundedness of power series
0
Growth bound on conformal map
4
Quantitative Weierstrass Approximation and Paley-Wiener for the Laplace Transform
15
Statements which were given as axioms, which later turned out to be false.
26
Linear combination of sine and cosine
2
Looking for references on higher order homogenous differential equations and a particular equation I am trying to solve
Question feed