On the tree-ishness of magmas and the stringiness of groups

Let me start off by saying that I suspect the answer to my question might fall under the domain of universal algebra, which is why I'm giving it that tag. However, I know only the very basics of universal algebra myself, so I'm not entirely sure. On the other hand, there is a possibility that it has a completely obvious answer and I'm just not knowledgeable enough in the area to see it. Hopefully it turns out a bit more interesting than that, though.

It seems to me that, in a certain sense, all associative and not-necessarily-commutative algebraic structures (semigroups, monoids, groups, etc.) inherit their core structure from that of strings under concatenation. For example, the respective free objects in each category can be constructed by starting with the set of strings over a certain alphabet (the generators, or the generators and a set of inverse symbols, etc.) together with a binary operation given by concatenation, and then modding out by certain structure-appropriate relations. But this means that semigroups, monoids, and groups inherit a set of limitations peculiar to working with strings of symbols. One clear example of this is the way cancelation works out. In a group, if $ax = ay$, we can cancel a from the left and conclude that $x = y$. However, if we instead have $x_1ax_2 = y_1ay_2$, we cannot necessarily conclude that $x_1x_2 = y_1y_2$. Intuitively, this is because the element a that would need to be canceled is "in between" the other two elements in the string, and thus we can't "reach it" to cancel it, since concatenation only acts at the edge of a string. In other words, the nature of strings as discrete, 1-dimensional objects has direct implications for what we can and can't do in a group, and this likewise applies to the other structures in question.

Non-associative structures are not "stringy" in this way. If a structure isn't associative, then concatenation fails to be a natural operation. Non-associative algebraic structures instead seem to inherit their properties from rooted n-ary trees, where n is the order of the operation. Again, this is mirrored by how you construct free objects in these categories: the free magma on a set $X$ is given by the collection of all (rooted) binary trees with leaves labeled in $X$, where the operation is joining trees at the root. Magmas are therefore "treeish". Once you add associativity, you leave the realm of trees and enter the realm of strings [in other words, in some sense, strings are just rooted trees modulo associativity]. Continuing on down that road, if you demand commutativity as well, you force a simplification of the core structure even further. With commutativity, we can cancel an element in between two others. If we don't have inverses, we're now basically working with multisets under union (again, modulo appropriate relations). If we do have inverses we run into some difficulties and have to do something a bit different, but intuitively I'm inclined to say we're still in the same "domain".

What I'd really like to do is figure out if anyone has tried to make this idea precise before, and if so, how? Has it lead to anything interesting? Beyond that, it would be interesting to better understand the relationship between the algebraic axioms we're imposing (associativity, commutativity) and the "topological" structure they induce on the elements. Hopefully someone around here might have some insight.

People have done lots of interesting works along these lines. This is a discussion that would be best had at a blackboard to facilitate easy drawing, but here is one version of the story among many. For other versions of this story try the following keywords: 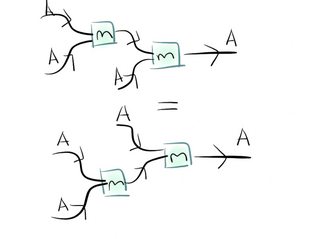 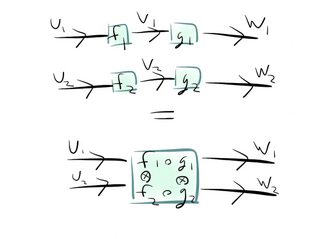 Anyway, here's something else. There is a type of structure called a locally constant factorization algebra on a stratified manifold $M$. I am not going to define what this is in full generality because it would take awhile; it is a kind of cosheaf $F$ on $M$ equipped with multiplication maps $F(U_1) \otimes \dots \otimes F(U_n) \to F(U)$ for every inclusion of disjoint open subsets $U_i$ into an open subset $U$, together with a local constancy condition constrained by the stratification. Here are some examples:

We can see already from these examples that factorization algebras tell us something not only about some possible "shapes" for algebras but about some possible "shapes" for modules over algebras. It's amusing to try to work out, for example, what a LCFA on a disk $D^2$ equipped with a stratification given by both the boundary circle $S^1$ and a point $0$ on it is; this amounts to a tuple given by an $E_2$-algebra $C$ in the interior of the disk acting on an associative algebra $A$ on the circle which in turn acts on an $(A, A)$-bimodule $M$ on the point...

There's lots more to say here but this together with the links should be plenty.

33
Do non-associative objects have a natural notion of representation?
10
Magma "actions" (or alternatively, "What is the Yoneda lemma for magmas?")
8
Are commutative alternative rings associative?
2
Methods to tell if a magma has idempotents
6
On the notion of partial semigroup
5
Question about denoting/designating of algebraic structures
2
Principal ideal of a non-associative magma
Question feed