The algebra is more useful here than pictures, but the pictures are fun, so here goes. To substantiate my comment about lamplighter, quick renderings of a typical ball and Følner set of lamplighter. Actually I don't know which of these is prettier, but the Følner set is actually the one that looks more like a ball.

The two pictures are taken from different angles and thus form a stereogram, so if you look at the leftmost picture with your right eye and vice versa your stereopsis should kick in. I find this helpful, if you don't you can ignore one of the pictures.

First, the ball or radius $3$ with the generators where the head moves. When the head moves to the right, you go up the diagram. I'm using some conventions, which are hopefully guessable. 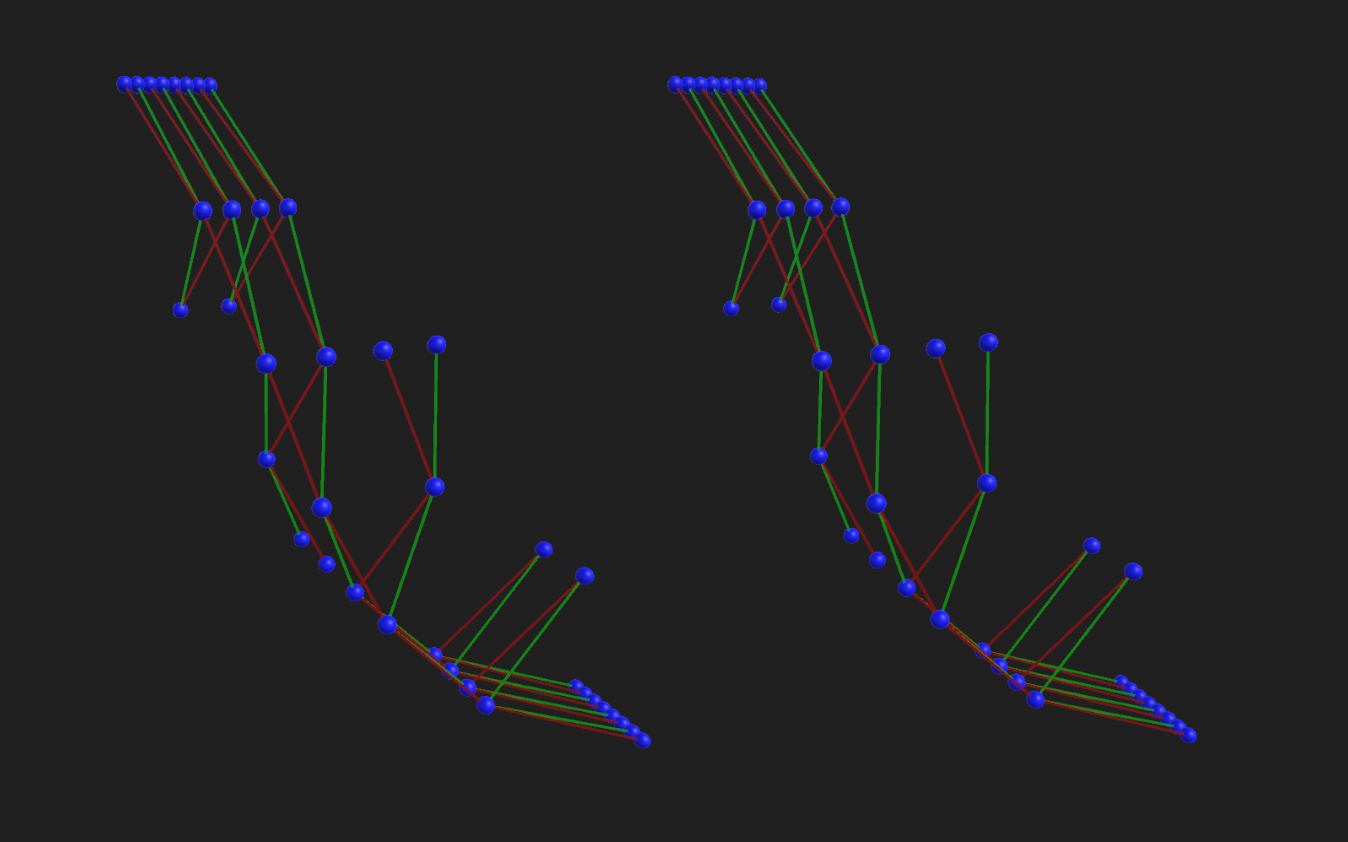 Here's a typical Følner set with the same generators. 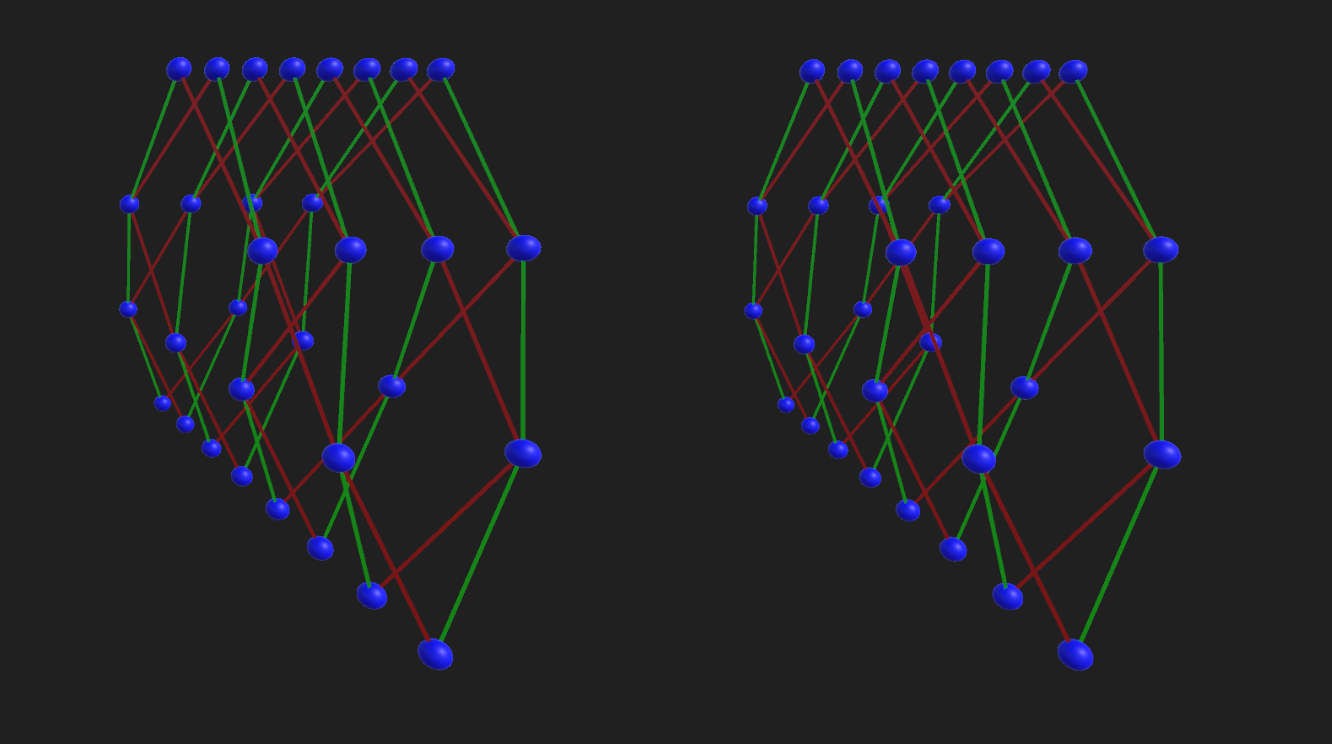 This question was popular in the 50s and 60s after Folner theorem was proved. Many examples of weird Folner sets were constructed. The typical examples of groups where Folner sets are nor balls are lamplighter groups and the wreath products of infinite cyclic gtoups. For a more recent papers see Anna Erschler. On isoperimetric profiles of finitely generated groups. Geom. Dedicata, 100:157–171, 2003 and the references therein.

An answer to your non-soft question is that the following groups all have [at least one] generating set where balls are known not to be Folner, but some other ("rectangular") sequence is: solvable Baumslag-Solitar, some wreath products (including the lamplighter), some extensions of $\mathbb{Z}^d$ by $\mathbb{Z}$ (those given by a matrix with no eigenvalues of norm 1), some $ax+b$ groups and basically nearly any amenable groups of exponential growth whose growth series is rational and has been computed (see below for details).

"strangeness" of Folner sets: As mentioned in the question, [a subsequence of the sequence of] balls form a natural Folner sequence in any group of subexponential growth. Now, as pointed out by others, balls (w.r.t. to some finite generating set) are fairly "ugly". This can be made precise if one considers the concept of an optimal Folner set:

One can check (using the Loomis-Whitney inequality) that optimal Folner sets in $\mathbb{Z}^d$ (w.r.t. the usual generating set) are [hyper]cubes (or that they tend to have a rectangular form). This is an unambiguous way of saying that balls are "clumsy" Folner sets. By comparison optimal sets are not "weird" at all (since they must be extremely well-chosen).

For more on strangeness, see the side notes below.

Explicit examples: Next, given a group of exponential growth, it's an open question whether any subsequence of the sequence of balls is Folner. I gave a partial answer which shows this is not case when the group [together with the choice of generating set] has pinched exponential growth. This includes many wreath products, solvable Baumslag-Solitar groups and some extensions of $\mathbb{Z}^d$ by $\mathbb{Z}$ (see link for details).

These groups can all be written as semi-direct products. If $G$ and $H$ are amenable, then one can show that $G \rtimes H$ is amenable and that Folner sets are of the Form $E_n \times F_n$ (where $E_n$ [resp. $F_n$] is a Folner sequence of $G$ [resp. $H$]). In that sense, the Folner sets that we come across (lazily, in the sense that they are produced by a general proof) in such groups are "rectangular".

Hence the groups mentioned above [solvable Baumslag-Solitar, some metabelian groups, groups whose growth series is rational and do not have a two poles at the radius of convergence (which includes many wreath products and $ax+b$-groups)] are a direct answer to your second question (for some generating set). One knows that balls (w.r.t. generating sets) are not Folner but some "rectangular" set is (just to be precise: there could be groups with a single pole which are not semi-direct products or extensions of amenable groups; for these groups [if any are known] there are no "rectangular" sets).

So now one might think that "rectangular" (and no longer balls) sets are favourites. But then there are also simple groups of intermediate growth see this question. And (if not for such groups, then for other simple groups of subexponential growth) I guess that balls are the only candidates one has.

Basically, I think the problem has more to do with how we construct amenable groups. We always use the four properties of amenability (extension, subgroup, quotient and direct limit). So ones start with growth as basic criterium, and uses those four properties (there are possibly many ways to do it). This will give you the known Folner sets for a given group. As a silly example you could say that natural Folner sets in $\mathbb{Z}^3$ are cylinders (balls in $\mathbb{Z}^2$ times balls in $\mathbb{Z}$).

Side Note 1: it's an long-standing open question to prove what are such sets in the (continuous) Heisenberg group (although the conjectured shape is well-described). That was my motivation for this question.

Side Note 2: As pointed out by Ycor, given a Folner sequence $F_n$ you can make it "as weird as you want" by considering an arbitrary sequence of finite sets $E_n$ with $\dfrac{|E_n|}{|F_n|} \to 0$. One the advantage of considering optimal Folner sequences would be to avoid such set-ups (the obvious disadvantage, is that there are almost no groups where optimal sets are known). A further note is that adding such a set $E_n$ has no influence on the invariant measure one obtains (for a fixed ultrafilter). Note that translating the sets can have an effect on the limit measure.

14
Folner sets and balls
16
Is it true that every f.g. infinite simple group has exponential growth?
12
Star-shaped Folner sequence
8
Sharp isoperimetry in the discrete Heisenberg group