See update at the bottom.

Here the brackets represent the fractional part, and $\alpha \in [0, 1]$ is a positive irrational number. It is well known that the sequences $\{n\alpha\}$, $\{n^2\alpha\}$ and more generally $\{n^p\alpha\}$ (with $p$ a strictly positive integer) are equidistributed modulo $1$. It is also well known that $\{2^n\alpha\}$ is equidistributed for almost all $\alpha$, indeed for all $\alpha$ that are normal numbers. Also these sequences are dense in $[0,1]$ with a uniform distribution on $[0, 1]$. But they are far from random: they are typically auto-correlated.

Even more striking, if $p$ is irrational (say $p=\sqrt{7}$) and $\alpha=1$, it seems that the sequence is not only equidistributed (a well known fact if I remember correctly) but also perfectly random-like and can be used for pseudo-random number generation. Not only all auto-correlations are equal to zero (it seems), but it passes the gap test and some basic independence test that I tried. See scatterplots below, where the point $(x_n,x_{n+1})$ represents respectively terms number $n$ and $n+1$ in the sequence.

Can this be proved or at least empirically assessed with more powerful tests or using more terms in the sequence? I only used the first $10^4$ terms. For large values of $p$, double precision is necessary, and I did not try it. Also, I only looked at independence in two dimensions. It would be great to see if it still holds in higher dimensions. 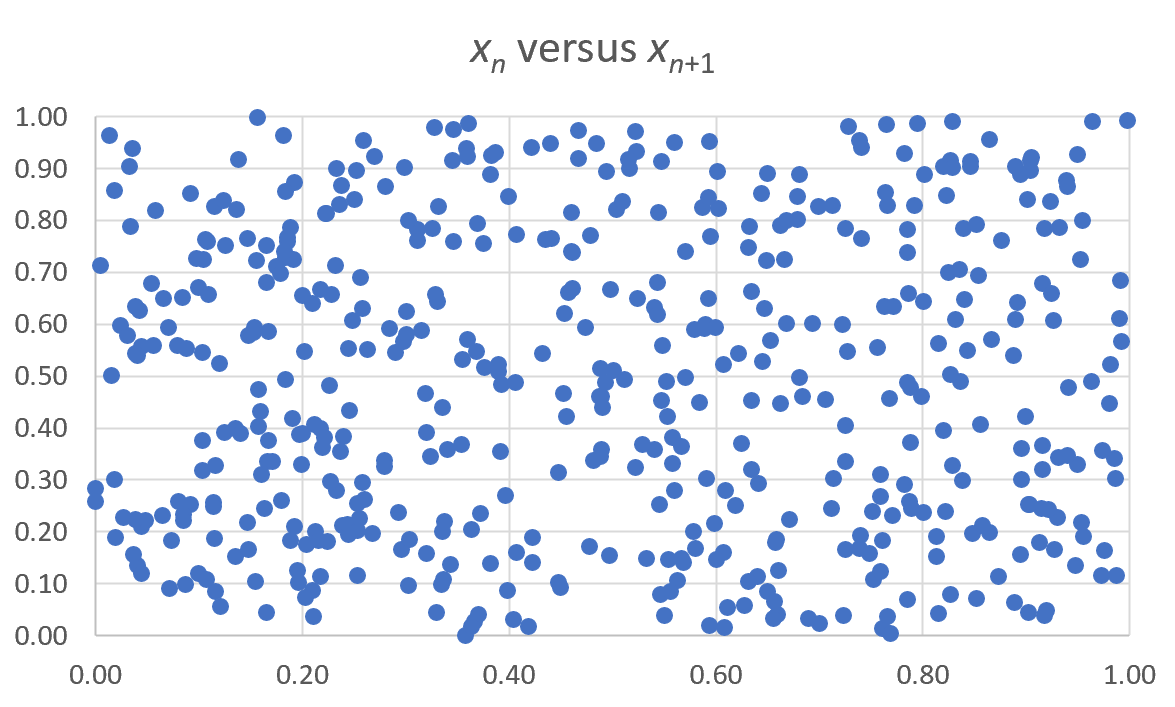 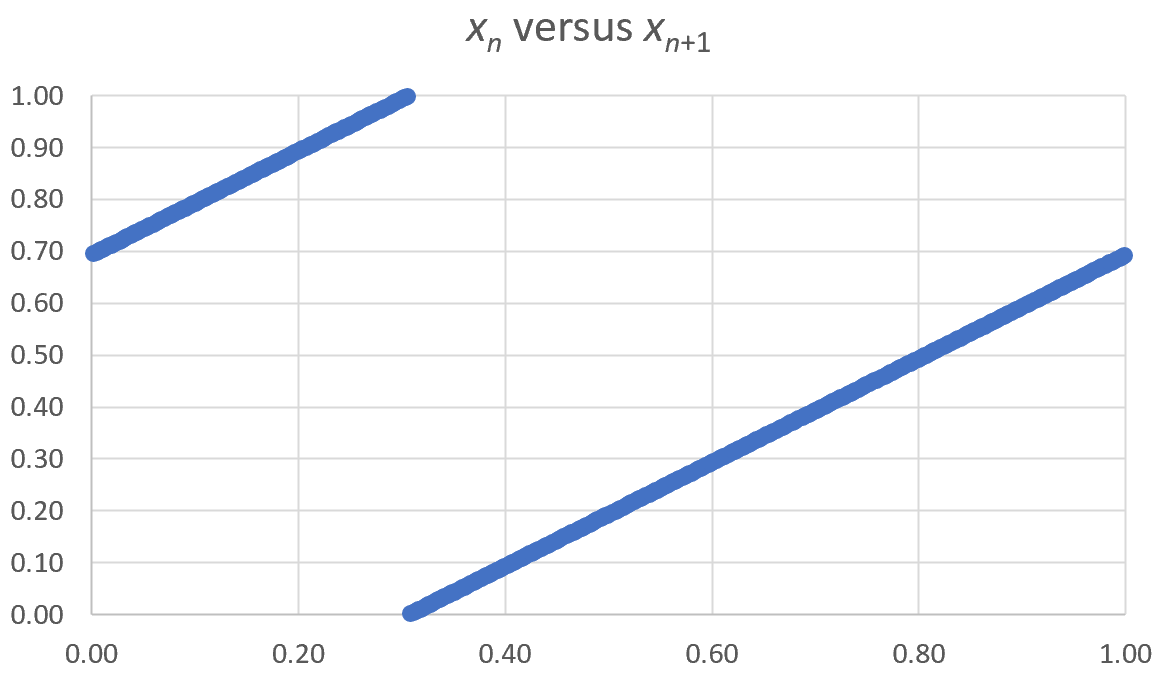 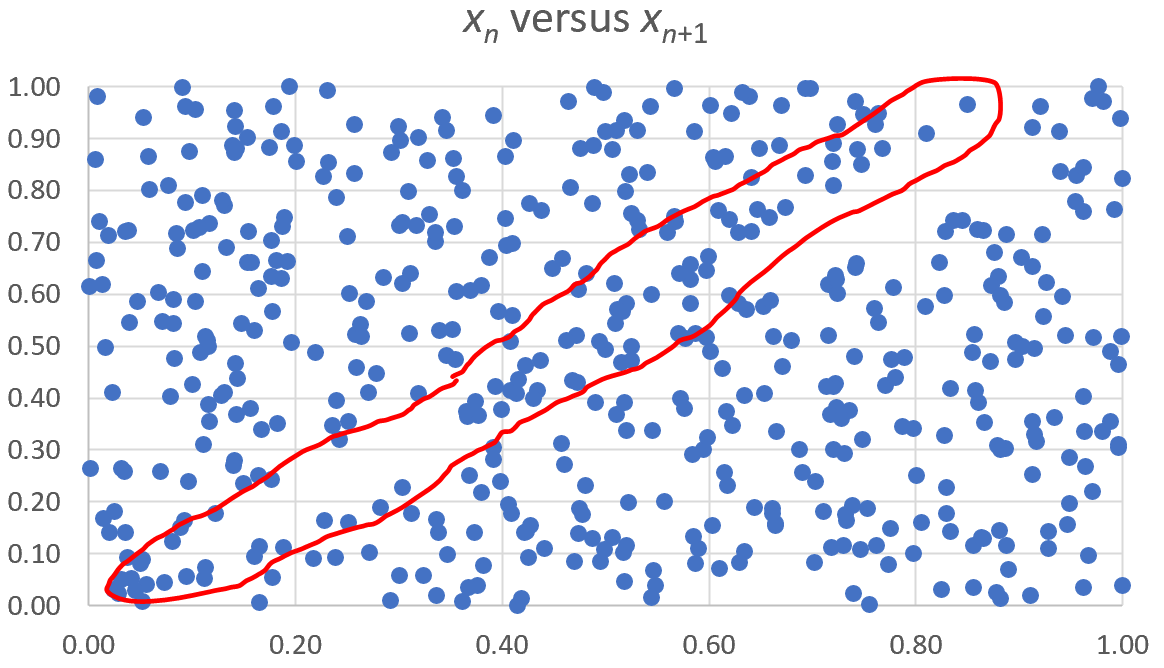 where $\chi$ is the indicator function.

As @Goldstern commented, if $p$ is an integer, the sequence $\{n^p\alpha\}$ can never be perfectly random-like, though randomness might be very closely approached as $p\rightarrow\infty$. So a possible solution is to look at polynomials of infinite degree in $n$ rather than $n^p\alpha$, that is, Taylor series, if one wants to achieve full randomness.

I also replaced the word random by random-like since all these sequences are deterministic, creating some confusion. Initially, I wanted to use the word strongly equidistributed rather than random. I also added the definition of perfectly random-like in the appendix.

Remark 1: Pairs $(x_n,x_{n+1})$ of successive values in the sequence $x_n:=n\alpha$ (mod 1, of course) lie on a straight line, as shown in your plot. Similarly, triples $(x_n,x_{n+1}, x_{n+2})$ of successive values lie on a plane if $x_n=n^2\alpha$, and a similar linear dependence exists for higher integer values of the exponent $p$ in $n^p\alpha$. Yuval Peres points out in his answer that an approximate version of this linear dependence will even be true for non-integer values of $p$.

Here, "almost all $\alpha$" means: The exceptional set of those $\alpha>1$ for which the statement is false has Lebesgue measure zero.

However, I don't think this is a feasible way to get "random" sequences. For starters, it can be very difficult to determine for a given $\alpha$ if it is in the exceptional set. As far as I know, it is even open whether the sequence $\alpha^n$ is equidistributed for $\alpha:= \frac 32 $.

(Following Vincent Granville's suggestion, I combined my 2 comments into an answer.)