Counting eigenvalues without diagonalizing a matrix

Today's arXiv has a paper by Pierpaolo Vivo, Index of a matrix, complex logarithms, and multidimensional Fresnel integrals, which asks the question whether it is possible to calculate the number $N(\lambda_1,\lambda_2)$ of eigenvalues of a real symmetric matrix $M$ that lie in the interval $(\lambda_1,\lambda_2)$ , without explicitly diagonalizing the matrix. The author points out that a certain formula in the literature based on the branch-cut structure of the complex logarithm generically fails to produce the correct result. 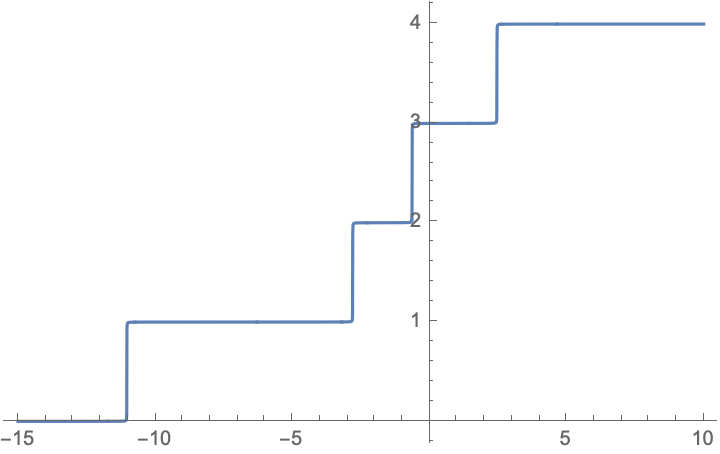 Question: From a computational point of view, this method to count levels is unlikely to be efficient relative to a direct diagonalization. The cited paper develops a method based on Fresnel integrals. Is there an alternative more efficient approach?

I note an earlier MO question along the same lines, but for the specific case of a random matrix with localized eigenstates; here the idea is to have a method that works generically.
linear-algebra random-matrices eigenvalues matrix-analysis
Share
Improve this question
edited Nov 25, 2020 at 16:18
Carlo Beenakker
asked Nov 25, 2020 at 16:03

Here is an efficient method.

First of all, I must quote that diagonalizing $M$ is not a method, because there is no explicit way to carry this out. It amounts to calculating the roots of a polynomial ! At best, one can do this in an approximate way.

Instead, I suggest to perform a preliminary step : put $M$ in Hessenberg form. This is done (method of Givens) in $O(n^3)$ operations, by using rotations in coordinate planes. This calculation is stable in the sense that the rounding errors, if any, are not amplified, so the spectrum is not polluted by more than the elementary rouding error of the machine.

Not the answer you're looking for? Browse other questions tagged linear-algebra random-matrices eigenvalues matrix-analysis or ask your own question.

4
Given $\mathbf{x}_i^\top A\mathbf{x}_i$ for a SPD matrix $A$ and orthonormal bases $\mathbf{x}_i$, what is the bound of its eigenvalues?
8
Matrix-tree theorem via supersymmetry (i.e. Grassman algebras)
1
Polynomial Eigenvalue Problem with few non-zero coefficients
3
Rotatable matrix, its eigenvalues and eigenvectors
5
Intuitive proof of Golden-Thompson inequality
1
The eigenvalue/singular values of (large) square random matrices
Question feed