Remark: Maximizing the least diameter among n convex pieces can be seen to have no neat solution - with most of the pieces near-degenerate, one can achieve, for each piece a diameter arbitrarily close to the diameter of C itself. However, I can't think of any quantity such that if we try to minimize the maximum of this quantity among n convex pieces, we would get degenerate pieces.

Note 1: For both questions, one might have a "not true in general but true for sufficiently large and finite n" answer. But this is a guess.

Note 2: Not sure if question 2 is related to the Plank Problem. Maybe not because maximizing the lowest least width of the pieces appears to favor triangular pieces rather than planks.

Note 3: From question 2, one can derive what seems to be a bunch of related questions: Given a positive integer n, find the smallest convex region C ("smallest" could mean least area, least diameter or least perimeter) such that from C, n convex regions can be cut with the least width of each being at least equal to unity.

Further Thoughts: If maximum (minimum) area among n convex pieces is to be minimized (maximized), then, it is easy to see all pieces should have same area. Same seems (no rigorous proof) to be the case with maximizing (minimizing) the minimum (maximum) perimeter among n convex pieces.

A guess: To maximize the least perimeter among n convex pieces cut from a convex region C, at least one of the cut lines necessarily ends at an end of a diameter of C.

Not an answer, just an example for Question 1. Here is a partition of the unit square into $n=3$ incongruent quadrilaterals whose maximum diameter is a candidate for the minimum possible. Indeed all three diameters (blue) are equal, to $2 \sqrt{2 - \sqrt{3}} \approx 1.04$. 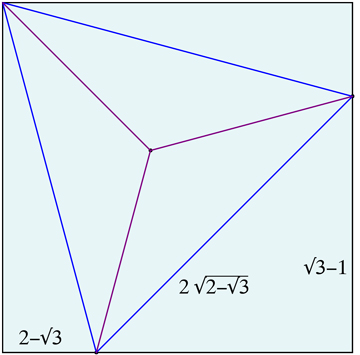