Does this property characterize straight lines in the plane?

Take a plane curve $\gamma$ and a disc of fixed radius whose center moves along $\gamma$. Suppose that $\gamma$ always cuts the disk in two simply connected regions of equal area. Is it true that $\gamma$ must be a straight line?

This is not a complete answer, but just some extended comments:

1. Existence of an inflection point inside every circle

Suppose that $\gamma$ is $C^2$ so that its curvature is everywhere well-defined. Then $\gamma$ must have an inflection point, i.e., a point of vanishing curvature, inside every one of these circles. If not, then the segment $S$ of $\gamma$ contained in one of the circles, say $C$, is locally convex. Since the end points of $S$ lie on $C$, it follows that $S$ is convex. Indeed, by gluing to $S$ one of the segments of $C$ determined by the end points of $S$, we obtain a simple closed locally convex curve. Every such curve must be globally convex, i.e., bound a convex set. So $S$ must lie strictly on one side of the tangent line of $\gamma$ passing through the center of $C$. Hence $S$ cannot bisect the area of the region bounded by $C$.

The above argument shows, in particular, that if the area bisecting property holds for circles of arbitrary small radius, then the curvature of $\gamma$ must vanish identically, which means that $\gamma$ has to be a line.

It seems that a more general phenomenon could be true. Suppose that $\gamma$ divides the circles (of some fixed radius centered at points of $\gamma$) into regions of constant area. Then one might conjecture that $\gamma$ should be a circle. The radius of the circle is determined by the ratio of the areas of the two regions. When the two regions have equal area, then the radius is infinite or $\gamma$ is a line.

Edit: the following argument is incomplete since it doesn't prove, as it is, that the direction of $S_x$ remains the same, or at least has vanishingly small perturbations, when $x$ goes to $\infty$. See the comments below.

I believe the implication is true for an arbitrary simple curve $\gamma$ whose both ends escape to infinity. First, let's rescale so that the discs have radius $1$. Denote by $D_r(\vec v)$ the open radius-$r$ disc centered at $\vec v$, where $r=1$ if it's omitted.

Proof. If not, then it has at least two connected components, whose $\gamma$-images split $D(\gamma(x))$ into at least three components. QED.

The following lemma does most of the work.

Lemma 3. There exist two parallel lines such that $\gamma(\mathbb{R})$ is between them.

We now fix two parallel lines $\ell^-, \ell^+$ that have $\gamma(\mathbb{R})$ between them and whose distance is minimal. 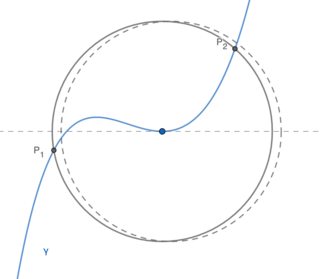 Put more simply, this forces $\sin(\theta_1)= \sin(\theta_2)$. This is essentially @Mohammed Ghomi's symmetry argument, which shows that the intersections are symmetric with respect to the y-axis.

When $\gamma$ is not a straight line, since it cannot lie entirely on one side of the x-axis, this forces there to be at least two inflection points within the disk, one in between $P_1$ and the origin and the other in between the origin and $P_2$.

I suspect that the second variation will give a relationship between $\gamma^{\prime \prime}$ at the origin and $\gamma^\prime$ at $P_1$ and $P_2$. The hope would be that it is possible to leverage this into stronger geometric control on $\gamma$. Perhaps when $\gamma$ is assumed to be real analytic, we can use induction on the variations to show that it must be a line segment. However, at present I don't really know how to use this.

I add some further thoughts here, as they will probably take more room than allowed in a comment.

Consider the variation of the problem, which I'll call $\mathcal{V}$, in which you ask that the intersections of the curve $\gamma$ with the circle are always exactly two, and determine two arcs of equal length. This version was considered by M. Winter and Pietro Majer in the comments. As they pointed out, the graph of any $r$-periodic function $f$ (where $r$ is the radius of the circle) is a solution of $\mathcal{V}$ as soon as $f$ does not oscillate too much, so that its graph intersects the circle always in exactly two points.

Consider then the family of problems $\mathcal{P}_t$, corresponding to the original, area version, but this time calculating the area of the two regions after removing from the original disc a concentric disc of radius $t\in [0,r)$. We have $\mathcal{P}=\mathcal{P}_0$. It is reasonable (isn't it?) to think that for $t$ small enough, the solution(s) of the problem $\mathcal{P}_t$ have to be "close" to the solutions of $\mathcal{P}$. On the other hand, when $t$ approaches $r$ the problem becomes "close", in some sense, to $\mathcal{V}$, for which we know that uncountably many solutions exist. So, if the answer to the original question is "yes", i.e. if only a straight line divides a disc that way, there should be a critical value $t_k$ such that for every $t\ge t_k$ the family of solutions starts to have cardinality larger than 1. Obviously this critical value may well be $t_k=0$ or $t_k=r$ (I tend to believe the latter is the case, because when $t=r$ the very concept of measure involved changes).

Not the answer you're looking for? Browse other questions tagged dg.differential-geometry mg.metric-geometry euclidean-geometry plane-geometry curves or ask your own question.

7
Rolling a convex body: Geodesics vs. rolling curves
15
Planar sets where any line through the center of mass divides the set into two regions of equal area.
3
Is always possible to slice a pizza in a fair way
5
Minimal surface which divides a convex body into two regions of equal volume
30
Tiling of the plane with manholes
9
Shape rotate, intersect; repeat: disk or empty set?
11
Connectedness in the plane
3
On some centers of convex regions based on partitions
Question feed