When is perimeter continuous under Hausdorff convergence?

It is known that the perimeter is lower semicontinuous for the convergence of sets. Two variants are widely known:

These work very nice when dealing with minimization problems. When dealing with maximizing sequences, however continuity is necessary. This is known to be true in the convex case, i.e. if a sequence of convex sets $\Omega_n$ converge in the Hausdorff metric to $\Omega$ (with non-void interior) then the perimeters converge.

In the problem which interests me $\Omega_n$ are minimal relative perimeter sets inside some domains $D_n$ which may be considered convex. This means that they have a boundary which is piecewise $C^1$ with smooth parts having constant curvature. Moreover, the arcs meet at prescribed angles ($\pi/2$ with the boundary of $D_n$, $2\pi/3$ with one another). Such sets are not necessarily convex, but they are not at all arbitrary. Also, the domains $D_n$ converge in the Hausdorff metric to some domain $D$ (for simplicity assume $D_n$ and $D$ are convex and non degenerate, eventually with fixed volume). My guess is that we should have continuity of the perimeters in this case, but I failed to find results which help me conclude that. Therefore here are my questions (concerning sets which converge in the Hausdorff metric): 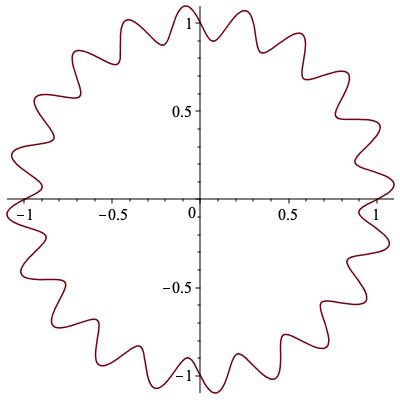 A sequence of $C^\infty$ regions that converge to the unit disk, but their perimeters converge to $\infty$.

If your $\Omega_n$ are $C^2$ regions, then curvature makes sense, so maybe a good condition will be a uniform bound on the curvature?

EDIT: this answers a different (or part of the) question, as Leo Moos remarked. To get an answer to the question, one would need to show that the $\Omega_n$ converge in the Hausdorff distance, and apply the answer to them instead of $D_n$.

With adequate assumptions ("$\mu$-reach" bounded below) similar to your intuition about possible failure cases, Theorem 4 in:

It remains to to show that the limits can be "swapped". I believe that choosing $r$ to be a suitable function of the Hausdorff distance will work, thanks to the explicit form of the approximation error in Theorem 4 in the above paper.

I found a paper which deals with the case I'm interested. It shows that for the particular case of minimal relative perimeter sets with given volume constraint the relative perimeter of the minimizers is continuous with respect to the Hausdorff metric when dealing with convex sets. The paper can be found here

The main idea is to exploit the fact that when convex sets $C_i$ converge to the convex set $C$ in the Hausdorff metric then there exist bilipschitz maps $f: C_i \to C$ with the property that the Lipschitz constants verify

Not the answer you're looking for? Browse other questions tagged ca.classical-analysis-and-odes calculus-of-variations isoperimetric-problems or ask your own question.