In a lecture I once attended, I remember the speaker using a result of the following nature:

While in the special case considered in the lecture, it was still easy to verify the claim, I feel like this is something which should also be true in the general setting described above, however I am unable to prove the same. I tried considering the sequence $r_n:=A_n/C_n$ and obtained a recursion for $r_n$ which also involved terms of the sequence $y_n:=C_n/C_{n-1}$ (which itself clearly satisfies the recurrence $py_n + r/y_{n-1} + q = 0$ and furthermore has an explicit expression coming from standard solutions of linear recurrences), I end up running into the issue of showing that the sequence $\{r_n\}_{n=1}^\infty$ is bounded - even though it seems so intuitively obvious. Am I missing something (probably really trivial observation) in the proof or is there some additional hypothesis that needs to be imposed?

I also feel like this should generalize further to '$k$-th order' linear recurrences: meaning those of the form $\sum_{j=0}^k P_j(n) A_{n+j} = 0$ for all $n \geq 0$, where $P_0, \cdots , P_k \in \mathbb R[T]$ are predetermined polynomials, all of the same degree. Is that too naïve to expect? If not, can I go about proving this (maybe with some mild additional hypotheses) without going into too heavy or technical computations? I would really like to know the answer to both of these questions that I have been pondering over for quite a while. Thanks a lot.

You need a number of additional conditions here for such a statement to hold. For one thing, equation $pC_n+qC_{n-1}+rC_{n-2}=0$ has infinitely many solutions, depending on initial conditions (say). Even if that is taken care of, the condition that $P,Q,R$ are polynomials having the same degree with leading coefficients $p,q,r>0$ is not enough.

Concerning the particular example in your Edit's, after one goes through all the motions prescribed in Theorem 1 (part 1) and Remark 4 in this paper or its freely available, report version, one concludes that $A_n/C_n=O(1/n^{3/2})$ (with any initial conditions on $(A_n)$). This conclusion is illustrated (for $A_0=C_0=1,A_1=C_1=5$) by the following image of a Mathematica notebook, which suggests that, moreover, $A_n/C_n\sim b/n^{3/2})$ for some real constant $b>0$ (click on the image to enlarge it): 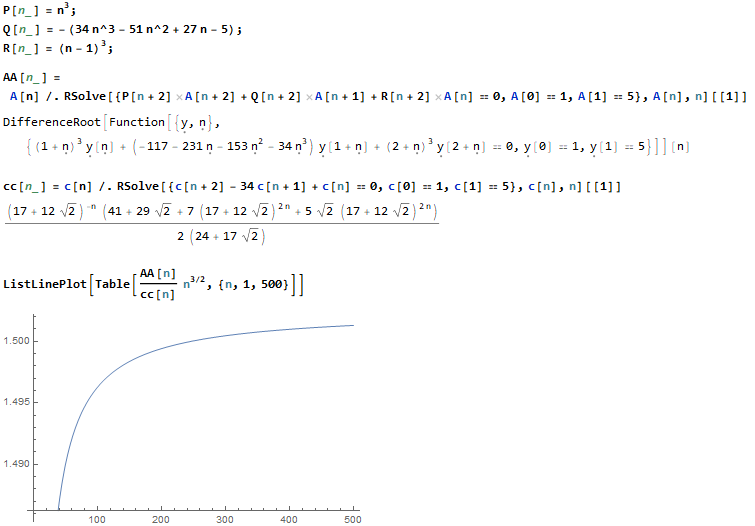 4
Asymptotics of holonomic recurrences and the Birkhoff-Trjitzinsky method

5
Is there a theory about these kinds of recurrence equations? Is this a known formula?
2
Simple and general relation between continuant polynomials
4
The characteristic polynomial of the product of two linear recurrences
4
Eliminating a variable from a two-variable linear recurrence
1
linear recurrence inequality of positive terms
1
The closed-form expression for $C_n$ sequence
5
Asymptotics of ratios of polynomially recursive sequences
Question feed