Sequences with high densities of primes: how to boost them to get even more and larger primes

I propose a methodology to help find large prime numbers with a much higher probability than picking up random numbers and testing them for primality. This would help speed up prime number generators based on primality tests, by reducing the number of integers needed to be checked to get one prime.

Most sequences of interest, say $n^2+n+41$ or the Mersenne sequence $M_n$, are univariate and rely on one parameter: the iteration $n$. Here we are dealing with bivariate sequences, visiting them diagonally rather then horizontally or vertically.

The prime power $\pi_n$ of a sequence measures its ability to generate prime numbers. It is an asymptotic metric measuring the empirical probability that the $n$-th term in the sequence is a prime number, and allowing you to compare two sequences to decide which one works best.

Let's start with a classic, well studied example to illustrate the concept: arithmetic progressions. For a fixed integer $k$, the sequence $f_k(x)=k!\cdot x+1$ with $x=0, 1, 2, 3\dots$ is an arithmetic progression with $\gcd(k!, 1)=1$ and thus contains infinitely many primes. The density of primes in that sequence depends on the parameter $k$. More precisely, the number of prime numbers among $f_k(0), \cdots,f_k(n)$ as $n\rightarrow\infty$ is asymptotically

where $\phi$ is Euler's Totient function. This result can easily be derived from the Prime Number Theorem for arithmetic progressions. Thus, the empirical probability for $f_k(n)$ to be prime if $k$ is fixed, that is the power of the sequence, is

The worst case, resulting in the lowest probability $\pi_n(k)$, is when $k=1$. Then the sequence consists of all strictly positive integers. The larger $k$, the higher the probability that the $n$-th term is a prime. Not only that, but in addition the sequence grows faster and thus generates more prime numbers, and bigger ones. With $k=13$ we have $5.21$ times more prime numbers among the first $n$ terms (when $n$ becomes large) and the $k$-term is $k!$ times larger than with $k=1$. Yet, primes become rarer and rarer as $n$ increases.

Note: The sequence $f_k(x)$, for a fixed $k$, is not congruentially equidistributed. But the sub-sequence consisting of its prime terms is. Also, $k! /\phi(k!) =O(\log\log k!) \rightarrow \infty$.

Since the sequences $f_k(x)$, for $k$ fixed, have more prime power as $k$ grows, the idea is to make $k$ depends on $x$ or the other way around. For instance, the new following sequence is based on this principle, using $x=k!$:

It has less prime power than the sequence $k! +1$, but this is compensated by the fact that the primes it generates become very quickly extremely large. Still, $g_k$ is prime for

Now we assume that there is no congruential artifact such as (for instance) $(k!)^2+1$ never being a prime. Obviously, this is not the case here, but if it was, we would need to randomize $(k!)^2$ and replace with (say) a Poisson deviate of expectation $(k!)^2$ and variance $(k!)^2$. Also, we should avoid sequences growing too fast, such as $g_k = (k!)^{k(k+1)}+1$. The total expected number of primes to be found as $k \rightarrow\infty$ is the sum of the inverse of $\log g_k$, if the terms in the sequence were random: you want it to converge as fast as possible to $\infty$. If that series converges to a finite value because $g_k$ grows too fast, you may end up with only a finite number of primes due to pure probabilistic reasons, not because of congruential issues (or maybe both).

Another type of sequence, with better prime power, is the following one:

Note that the sequences involving $k!\cdot x+1$ are not only non congruentially equidistributed, but even the sub-sequences consisting of their primes only are not: $\bmod(k!\cdot x+1, p) = 1$ regardless of the prime $p$, when $k \geq p$, and regardless as whether or not $k!\cdot x+1$ is prime. 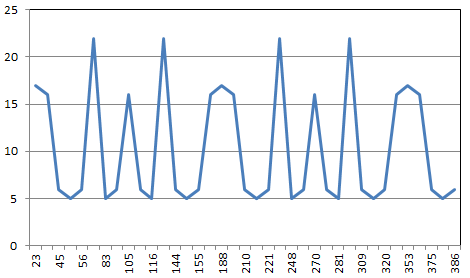 26
Constructing prime numbers
7
Is there an Infinite increasing sequence of primes with bounded second or larger differences?
1
Numbers of a different order?
5
General Euclid-Fermat sequences
6
A generalization of strong primes
Question feed