Any two (convex, 3-dimensional) polyhedra with pairwise congruent faces are themselves congruent.

As a more formal generalization to general dimensions, one often reads something like this (also known as Alexandrov's theorem, see also here):

Except that this formulation is incorrect, especially in dimension three! For example, consider the following two combinatorially equivalent polyhedra found by Matt F. (over here) and depicted by მამუკა ჯიბლაძე (over here): 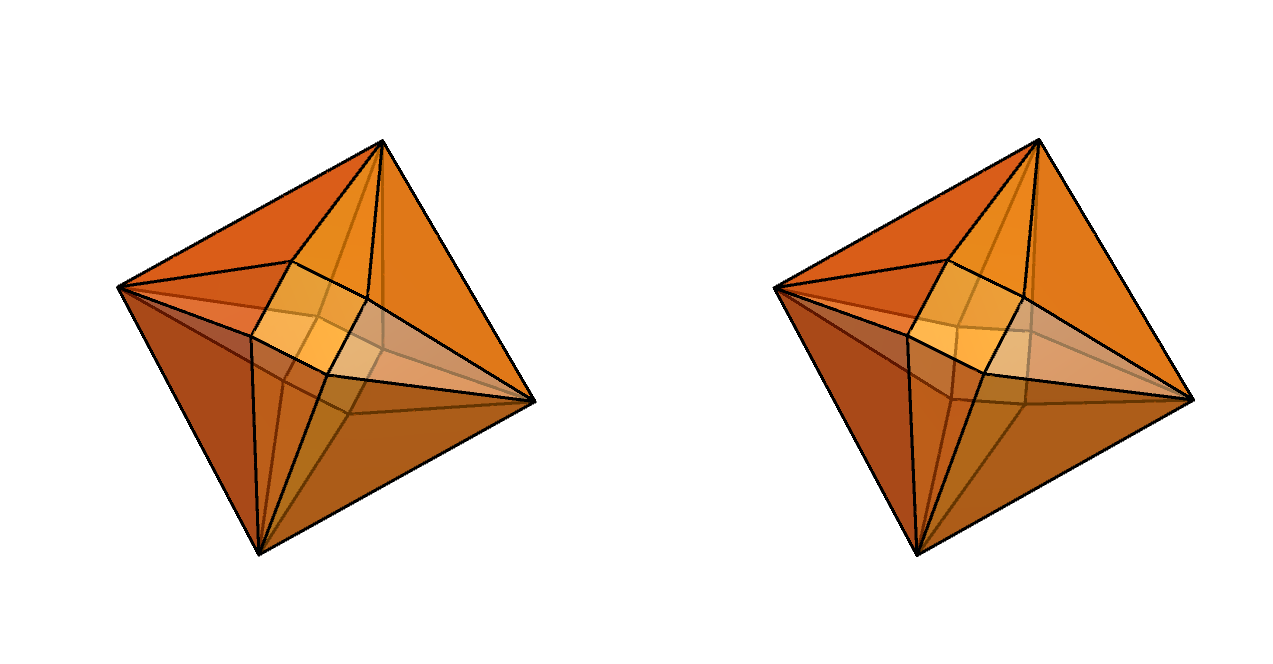 Either polyhedron consists of two stacked twisted antiprisms, which are chiral, and depending on the orientation of each antiprism, the resulting polyhedron is metrically distinct, even though corresponding faces (aka. facets) are congruent.

To deal with this contradiction in my knowledge, I looked up the common proofs of Cauchy's rigidity theorem for polyhedra. And it appears as if each proof uses an ingredient that is often not explicitly stated: not only corresponing faces must be congruent, but also corresponding interior angles of faces must be equal. For me, this was a surprise, because I always considered Cauchy's theorem as especially elegant for its relatively weak assumptions. This subtlety however, makes it unclear to me what the right generalization to higher dimensions should be.

Apparently, one can formulate the theorem also with matching edge-lengths rather than matching interior angles, which brings me to the following guess on what a generalization might look like:

I highlighted the relevant changes: we ask for all (proper) faces to be pair-wise congruent, rather than just the facets.

Question 1: Is this a correct generalization?

Question 2: Do we need this modification in dimensiona $d\ge 4$, or is the "naive" version still valid except for dimension three?

Here is another observation, which was quite surprising to me. Instead of making polytopes rigid by requiring congruent facets, it apparently suffices to require congruent 2-faces (and maybe edges):

Maybe again, in $d\ge 4$ it suffices to require only 2-faces. This feels quite opposite to the usual Cauchy theorem, but is essentially the same.

5
Alexandrov's generalization of Cauchy's rigidity theorem
4
Minimal data required to determine a convex polytope
1
Is a polytope with vertices on a sphere and all edges of same length already rigid?

57
Fair but irregular polyhedral dice
4
intersection of convex and non-convex polyhedra
18
The limit of edge-midpoint convex polyhedra
1
Efficiently Generating the Convex Hulls of Two Polytopes and Counting Faces
16
Rigidity of convex polyhedrons in $\mathbb R^3$ with faces removed
2
Products of polytopes and the normals of their facets
16
Can I build infinitely many polytopes from only finitely many prescribed facets?
2
Distance between two polyhedra that takes incidence structure into account
Question feed