This is my first post. I'm not a mathematician, just an electronics engineer who loves mathematics. In one of my projects, I arrived at the following function:

The project requires $V\left(\varphi\right)$ to be inverted, to obtain angle $\varphi$ (unknown), from a voltage $V$ (known). $V\left(\varphi\right)$ is continuous and strictly monotonic (descending), so an inverse mapping should exist. I tried to invert it symbolically, but couldn't arrive at a closed-form solution for $\varphi\left(V\right)$. I ended up using MATLAB to compute it numerically, and the project was successfully completed.

Out of pure curiosity, I asked my cousin (a mathematician) to attempt to symbolically invert the above function, but he also couldn't do it, and couldn't even give me a rigorous answer as to the existence of such solution. So, my questions are the following:

I apologise if this problem is too easy, too obvious, or even irrelevant to the MathOverflow community. I've already posted it in the Mathematics Stack Exchange community (for students and professionals), where I got some replies which loosely confirm my suspicion that a closed-form expression for $\varphi\left(V\right)$ does not exist. However, the replies were either too descriptive, or used Taylor series expansions to invert the function, which is not what I want. No reply provided rigorous answers to my questions. So, I thought of posting the problem here, where more advanced topics are discussed, in the hope that someone can provide me with some rigorous answers. This is not a homework exercise, and the associated practical problem has already been solved numerically. This post was made out of pure curiosity about the invertibility of functions of the form of $V\left(\varphi\right)$. Many thanks to all for your replies.

Adding some graphics, in order to better illustrate the problem. 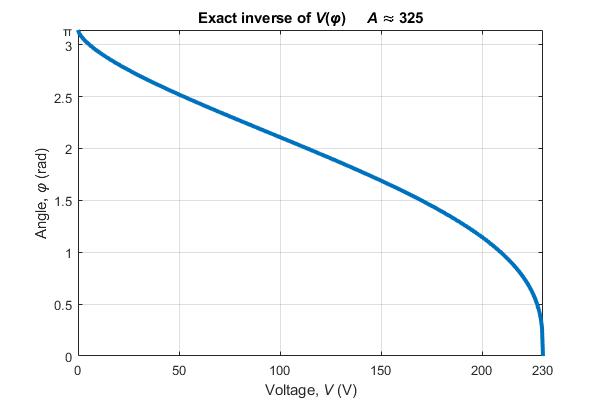 Based on the comment by @PietroMajer, the problem can be reduced to the inversion of function $k=x-\sin(x)$. In this case, the values of both $x$ and $k$ lie in the interval $[0,2\pi]$. The following figure shows a plot of the inverse of $k=x-\sin(x)$, together with a plot of the function itself (dashed line). Plotting them both on the same graph is useful, since they both have the same range for their independent and dependent variables. It can be observed that now there is a clear symmetry of this function at the point $(\pi,\pi)$, thanks to the removal of the square root term. This means that we only need to deal with the interval $[0,\pi]$, and use symmetry on that result to obtain the other half ($[\pi,2\pi]$). 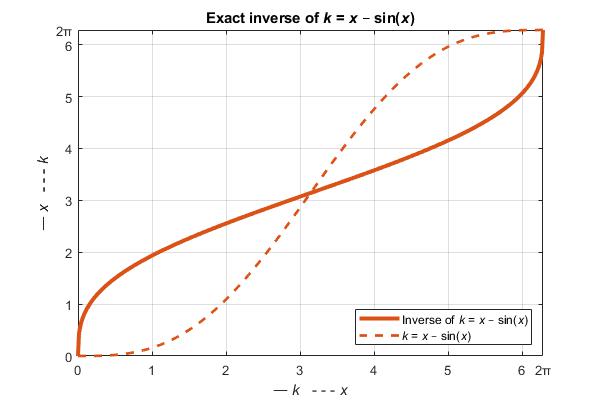 Please see my accepted answer at Mathematics Stack Exchange, for some useful approximations of the inverse of $k=x-\sin(x)$, and of $\varphi\left(V\right)$. They may not be of much interest to pure mathematicians, but, being an electronics engineer, I consider them very useful in solving practical problems involving the inversion of $k=x-\sin(x)$ or similar functions.

The answer to the question of whether the inverse has a closed form depends of course on one's definition of "closed form." One plausible definition is that a closed-form function is a function that lies in a so-called Liouvillian extension of $\mathbb{C}(x)$, the field of rational functions of $x$ with complex coefficients. I won't give the exact definition of a Liouvillian extension, but suffice it to say that any function that you can get via a finite number of applications of addition, subtraction, multiplication, division, taking $n$th roots, exponentiation, and taking logarithms is going to be a closed-form function in this sense. Note that since we're working over the complex numbers, we get trig functions and their inverses as well. So this covers everything that most everyone would agree is "closed form." (Liouvillian extensions also include algebraic functions that aren't expressible using radicals; not everyone would consider such functions to be expressible in "closed form," but since we're going to show that a certain function is not expressible in closed form, it doesn't hurt to include extra functions in our class of "closed-form functions.")

Rigorous proofs that specific functions of interest are not Liouvillian go back, naturally, to Liouville, with later contributions by other authors (e.g., Ritt, as mentioned by Iosif Pinelis). Again, reviewing the general theory is beyond the scope of a MathOverflow answer, but fortunately, when it comes to finding inverses, there is a theorem of Rosenlicht ("On the explicit solvability of certain transcendental equations," Publications Mathématiques de l'IHÉS 36 (1969), 15–22) that can be used to handle many of the simple "transcendental equations" that arise in practice. Stated slightly informally, the relevant special case of Rosenlicht's theorem is the following.

This isn't quite a contradiction yet, but it's not so hard to show that $y$ and $z$ can't be algebraic functions of $x$. We can use the argument given by Bronstein et al. in their paper showing that the Lambert $W$ function is not Liouvillian ("Algebraic properties of the Lambert $W$ function from a result of Rosenlicht and Liouville," Integral Transforms and Special Functions 19 (2008), 709–712). If $z$ has a pole of finite order (in the extended complex plane), then $y$ has an essential singularity, but this contradicts Equation $(**)$ since the left-hand side has no singularities. So $z$ must be constant, but this is absurd.

By the way, according to Rosenlicht, Liouville himself already knew that the solution to Kepler's equation is not Liouvillian, but I haven't checked Liouville's paper myself.

[I'm making this answer community wiki since I benefited from the observations of several other respondents.]

The change of variable given above by Pietro Majer shows that this is equivalent to Kepler's equation Wikepedia on Kepler's Equation which is believed not to have any closed form solution (let alone an elementary solution). I am actually not so sure that's true and I don't know of any proof.

According to Ritt's Theorem 23 (page 89) (see also the first paragraph on page 90 of that paper and the definition of (Liouville) monomials of the first order on page 70 there), your desired inverse is an elementary function only if $t-\sin t\,\cos t$ is an algebraic function of $e^{v(t)}$ or $\ln v(t)$ for some algebraic function $v$. However, at this point I do not see how to check the latter condition in your case.

Mathematica cannot invert your function either: 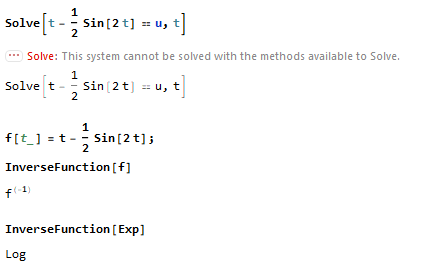 Not the answer you're looking for? Browse other questions tagged real-analysis ca.classical-analysis-and-odes closed-form-expressions or ask your own question.

22
How to prove Lambert's W function is not elementary?
20
When can an invertible function be inverted in closed form?
6
Do we have an algorithm for comparing $e^e$ with rationals?