This is a continuation of my post Number of bounded Dyck paths with "negative length".

Any idea how to prove the general case?

Here's how I think this can be proved based on what Richard Stanley already did in your previous question.

If we take the network in Section 3.1.6, Example 4 part (a) of https://arxiv.org/abs/1409.2562 and remove everything above height $2k+1$, then the entries of your Hankel determinant count the paths from sources to sinks for this network, and hence by the Lindström-Gessel-Viennot lemma, the determinant is the number of nonintersecting families of paths. These nonintersecting families of paths in turn correspond to $k$-fans of $3$-bounded Dyck paths of semilength $n$ (see the explanation/terminology in Ardila). And $k$-fans of $3$-bounded Dyck paths of semilength $n$ are easily seen to be the the same thing as $k$-bounded $P$-partitions where $P$ is the $2n-1$-element zigzag poset. In his answer to your previous question, Richard Stanley explained why these $P$-partitions are enumerated by $C^{(2k+1)}_{-n}$.

For clarity, here's an example of the kind of network + families of nonintersecting paths: 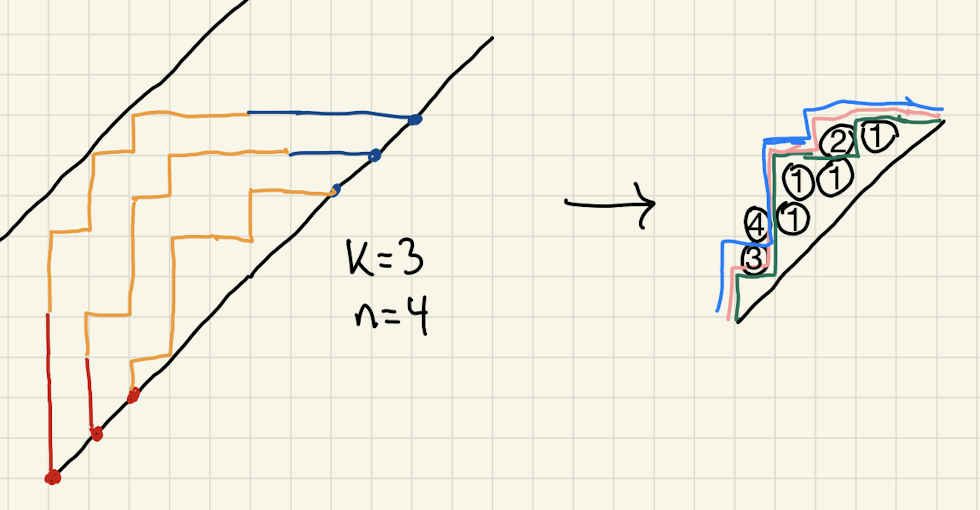 This raises an interesting possibility:

Let's let $\mathcal{D}_k$ denote the infinite network where we take a diagonal slice of width $2k+1$ of the 2D grid, with all edges directed right and up. The above discussion explains that there is a relationship (in fact, a "reciprocity" relationship) between counting families of nonintersecting paths in this network with $1$ source and $1$ sink (these are what $C^{(2k+1)}_{n}$ count), and counting such families with $k$ sources and $k$ sinks (these are what $C^{(2k+1)}_{-n}$ count).

Question: Is there a similar "reciprocity" relationship between counting families of nonintersecting lattice paths in $\mathcal{D}_k$:

(UPDATE: I asked this as a separate question - Reciprocity for fans of bounded Dyck paths - and it got a wonderful positive answer by Gjergji Zaimi.)

I have to mention that this set up bears a lot of similarity to another context in which reciprocity results are studied: namely, for dimer coverings (a.k.a. perfect matchings) of linearly growing graphs. Some papers in that vein are:

et cetera. Dimer coverings are not exactly the same as nonintersecting paths, but the two can often be related, and so it is possible the counting problems under consideration here could be understood in terms of that existing literature.

Not the answer you're looking for? Browse other questions tagged co.combinatorics enumerative-combinatorics hankel-matrices or ask your own question.