Is equational logic in universal algebra a proof system not a logic system?

As far as I know a logic system defines its own semantics (e.g. $\models$), but not a proof calculus/system on its language. See p261 in Ebbinghaus et al's Mathematical Logic:

In universal algebra, it seems to me that "equational logic" is defined as a proof system, so is it not a logic system in the above sense, and is a counterexample of the use of "logic" in "logic system"? See p94 in Burris et al's A Course in Universal Algebra: 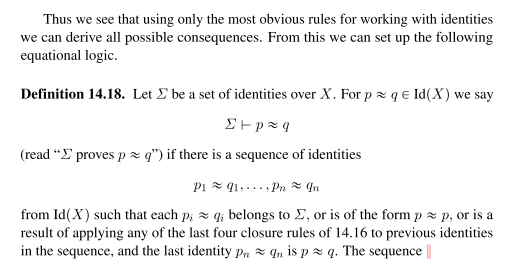 and p42 of Baader et al's Term Writing and All That 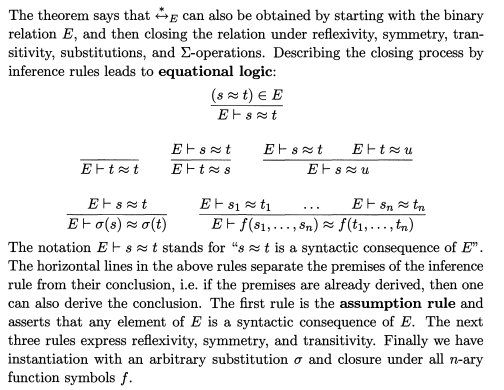 The model-theoretic definition of logic quoted in the question is given in that book to be used in Lindström's theorem. Nevertheless, equational logic is a model-theoretic logic and the induced consequence relation is equivalent to the one defined via proof theory (for this logic is complete).

Now, other questions about other general definition of logic were raised in the comments. In order to address those questions we need some preliminary remarks and notation.

For a given logic $l$, the following are equivalent:

Now, we can consider the question:

Yes, in some trivial sense: We can look at the structures inducing valuations compatible with $l$ (assuming that structures induce valuations in that case). But the difficulty is to recover your first consequence relation from the induced relation. This is not always possible:

We can look at the structures inducing valuations compatible with $l$, then we can look at all the consequence relations preserved by those structures. In general, we will not recover $l$ this way, even if $l$ is a finitary, reflexive, idempotent and monotonic relation. We can start with a set $m$ of valuations which are not induced by structures. We can take $l=L(m)$, and this will be finitary if $X$ is finite, for example.

But if we allow those general valuations, not only those induced by structures, then yes, from a tarskian logic $l$ we can define a canonical set of valuations $G(l)$ such that $l$ can be recovered from that set.

Not the answer you're looking for? Browse other questions tagged lo.logic computer-science universal-algebra or ask your own question.

9
How much of the current logic is about syntax?
6
What is a reference for an explicit, logic-based, statement of duality in category theory (in ''complicated'' situations)? And what are the prerequisites for a beginner in logic?
4
Ask for recommendations for textbook on mathematical logic
1
Is there a natural example of a second order proof that does not reduce to a first order proof in a straight forward way, if all variables are filled in?
17
Are there textbooks on logic where the references to set theory appear only after the construction of set theory?
16
Topological universal algebra: what is a variety?
6
How can the simply typed lambda calculus be Turing-incomplete, yet stronger than second-order logic?
7
Birkhoff's completeness theorem put into practice
Question feed