What are good mathematical models for spider webs? 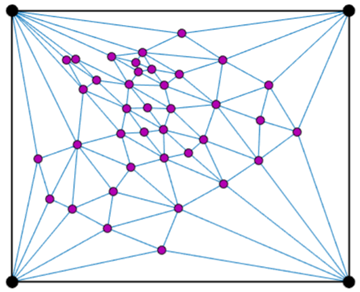 I started to wonder what are good mathematical models for spider webs. Obvious candidates are geometric graphs embedded in surfaces, or rather in space. One could argue that Tutte’s Spring Theorem from 1963 is the base model: a planar geometric graph, given as the equilibrium position for a system of springs representing the edges of the graph. It is the minimum-energy configuration of the system of springs (see the picture for illustration). There are generalizations of such minimum-energy configurations for convex graph embeddings into space (Linial, Lovász, Wigderson 1988), where you place, for example, four vertices of the graph at the vertices of a simplex in $\mathbb R^3$.

I think such systems of springs are good models, because the threads of the spider web are elastic. However, when viewed as models for spider webs, I wonder whether these minimum-energy spring models are missing two aspects:
The purpose of spider webs is to catch prey, so I feel the ideal model should also consider
(A) maximizing the area covered (or the volume of the convex hull) and
(B) minimizing the distances between the edges.

To me, formalizing (A) and (B) and combining it with the minimum-energy principle for a system of springs would be the ideal mathematical model for spider webs.

My second, broader question: Are you aware of any mathematical models developed explicitely to model spider webs? I checked MO and MSE and searched on the internet, but could not find anything. Maybe I am looking in the wrong fields, I wonder. Any help would be greatly appreciated!

In response to the second question (which I interpret as asking for math models of spider webs as they appear in Nature): There exist several distinct types of spider webs. The most common type, the orb web of araneids, has been modeled in Simple Model for the Mechanics of Spider Webs (2010).

The model highlights the mechanical adaptability of the web: spiders can increase the number of spiral threads to make a dense web (to catch small insects) or they can adjust the number of radial threads (to adapt to environmental conditions or reduce the cost of making the web) – in both cases without reducing the damage tolerance of the web. 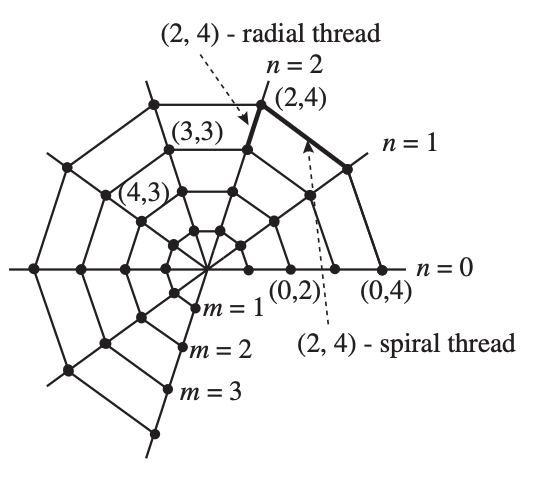 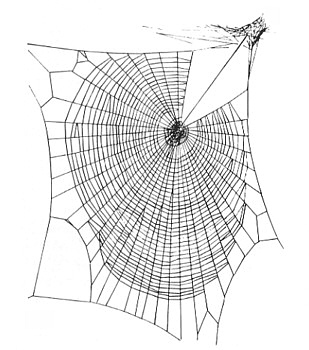 Every locally connected Julia set of a transcendental entire function also has this form (shown in https://arxiv.org/pdf/1110.3256.pdf). 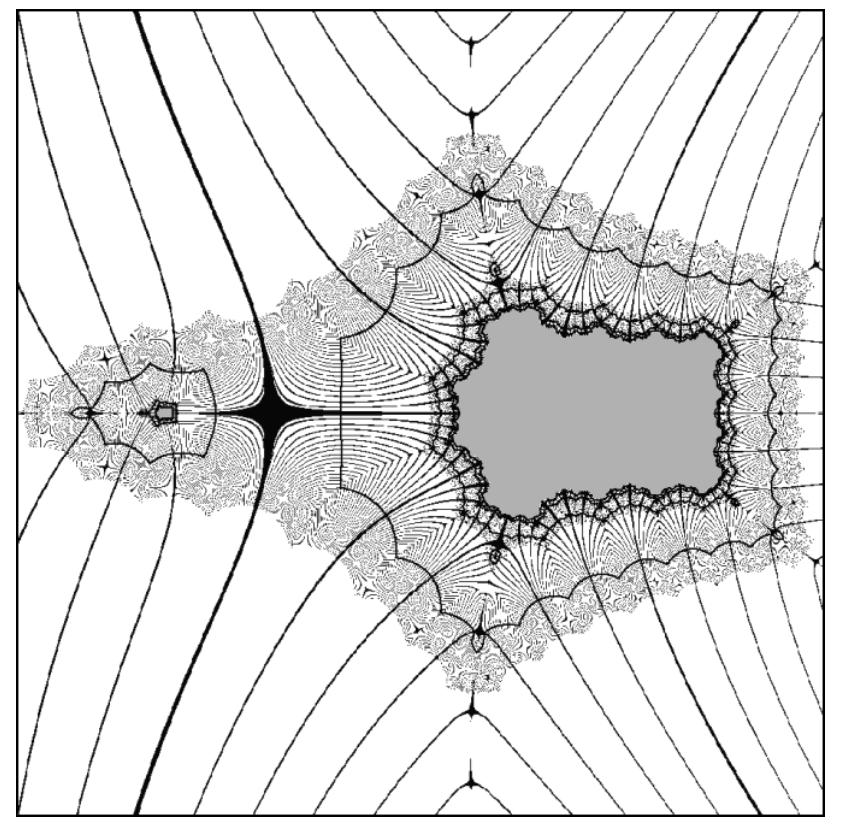 So, I promised I would come up with some answer, but looks like there is already a great deal in the great answers above.

Anyway, I find it impossible to resist the temptation, especially because I think there is so much math that we can learn from Nature, particularly from our little friends, the spiders.

Spider webs are not only for catching preys. They are, in a sense, an extension of their sensory apparatus, in that they help a spider detect at least three types of objects: a prey, a predator, and a potential mate.

How? Well, the web is kind of elastic, and it acts as a strange non linear filter: by "measuring" the perturbations on the web, our friends can isolate some frequencies which give them the clues.

See here and here and also here for details.

As far as I know, the Theory of Morphological Computation is still undeveloped, particularly from the mathematical standpoint. Perhaps some smart fellow here on MO can enlighten us. Meanwhile, just wish to point out that the changes of configurations mentioned by Carlo above are also done as "tuning" the morphological computing capabilities of the web

As we all know, quantum gravity is the holy grail of modern physics. Among the most intriguing attempts so far, there is Fotini Markopoulou Kalamara's Quantum Graphity. see here.

To summarise Fotini's brilliant idea is not easy, but here is the gist: start from a universe in which there is no space-time, and try to build it as a graph. Create a quantum system, that basically is a quantum superposition of many graphs, and associate to this beast an hamiltonian.

Set it to some default eigenvalue of energy, say HOT. That corresponds to a fully connected graph, where every point is one step from any other. Too many connections to make up our space time! But now suppose it "cools off": the edges get disactivated, till it settles into something like our ordinary space time (the full theory is, as far as I know, still undeveloped, needs some really good mathematician to work it out). Now, I would suggest you toy with that theory, precisely because , as you suggested, spiderwebs give you an insight into the nature of space (and time too). For quantum gravity, you do not simply need to replicate the topological properties of space-time, but also its metrics (say volumes, areas, etc. Essentially approximate general relativity).

So, perhaps the DEMIURGOS is a giant super inteligent spider! 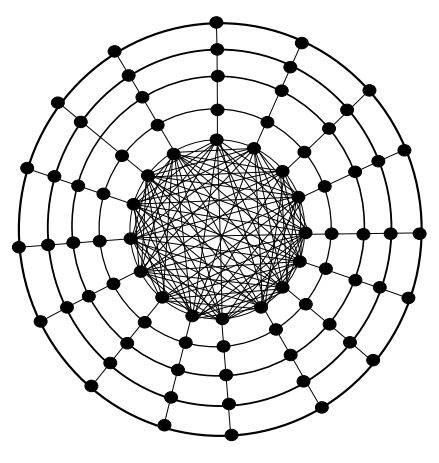 Now, after the double detour, back to the question and the answer: I suspect, in fact I am pretty sure, that the best way to model spider webs are Weighted Simplicial Complexes, ie simplicial complexes in which all simplices have a weight (either a real number, or even a complex one, in case we wanna formalize quantum spiders): see here.

Why weighted simplicial complexes? Because they generalize weighted graphs, and they have an entire artillery (laplacian, persistent homology, etc) which can be put to use here. Example: you ask for minimal area, that to me means that when you write your energy, you must add a term which tries to minimize the total area covered by the web. I also think that these complexes could add some light into spider webs as morphological computers (I have a small paper with some folks on diffusion of information on weighted simplicial complexes. The core idea is that higher simplices are hubs of information broadcasting, which in case of graphs are missing)

A biologist friend told me about this question on MathOverflow, so I wanted to contribute a useful link to a related article that appeared in NATURE.

This is the link https://www.nature.com/articles/nature10739

The mathematically interesting feature investigated here is the nonlinear response of silk threads to stress:

From the abstract of this article: Here we report web deformation experiments and simulations that identify the nonlinear response of silk threads to stress — involving softening at a yield point and substantial stiffening at large strain until failure — as being crucial to localize load-induced deformation and resulting in mechanically robust spider webs. Control simulations confirmed that a nonlinear stress response results in superior resistance to structural defects in the web compared to linear elastic or elastic–plastic (softening) material behaviour. (...) The superior performance of silk in webs is therefore not due merely to its exceptional ultimate strength and strain, but arises from the nonlinear response of silk threads to strain and their geometrical arrangement in a web.

Not the answer you're looking for? Browse other questions tagged graph-theory gn.general-topology gt.geometric-topology mp.mathematical-physics spectral-graph-theory or ask your own question.

33
An intelligent ant living on a torus or sphere – Does it have a universal way to find out?

19
What is Kirillov's method good for?
2
What are some good sanity checks for simulating BNLS?
15
What are some useful invariants for distinguishing between random graph models?
15
What are parabolic bundles good for?
6
Further Developments of Lieb-Schultz-Mattis theorem in Mathematics
1
Can Tutte embedding be guaranteed that each face is convex?
Question feed