Interpretation of "27" lines for cubic surface with rational double points

What happens in general? My understanding is that, since the number $27$ (or $2875$ for quintic threefolds) is calculated via the intersection theory, it should be interpreted as the length of the Hilbert scheme of lines, especially when the cubic surface is not too singular and the number of lines is still finite.

So my question is, is there work been done to describe the Hilbert scheme of lines for cubic surfaces with rational double point singularities, or is there a geometric interpretation of how the number $27$ are attributed to the multiplicities of geometric lines in those cubic surfaces?

As mentioned in Dolgachev's book, Schläfli classified cubic surfaces according to their singularities. In A Memoir on Cubic Surface Cayley tabulates for each type of singular cubic surface the number of distinct lines and their multiplicity. The multiplicity of a line in the Hilbert scheme of lines depends on whether it passes through a singularity and the type of that singularity. I'll illustrate this in some examples. 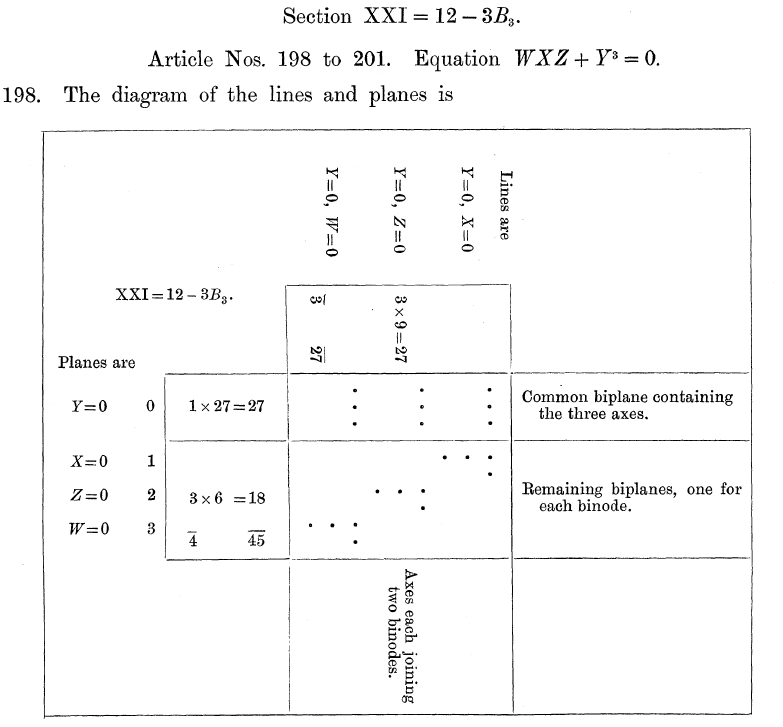 As mentioned by Balazs in the comments, the case XXI of three $\mathrm{A}_2$-singularities is particularly nice. The singularities form the vertices of a triangle, whose edges are the three lines in the cubic surface, each of which has multiplicity $3\times 3=9$ in the Hilbert scheme. In this case it is particularly simple to write down the equations cutting out the Hilbert scheme as a subscheme of the Grassmannian $\mathrm{Gr}(2,4)$; one obtains that the Hilbert scheme of lines is the spectrum of three copies of $\mathbf{C}[x,y]/(x^3,y^3)$ (which confirms that each line has multiplicity $9$).

I guess you could wonder which finite $\mathbf{C}$-algebras occur as rings of functions of Hilbert schemes of lines of singular cubic surfaces; I don't think Cayley tabulated these.

3
How to find the action of an automorphism on the 27 lines on a cubic surface?
3
A classification of rational surfaces with effective $K$
5
Singular models of K3 surfaces
5
A question regarding lines on a cubic surface
5
If $X$ is a degree 3 smooth integral surface in $P^N$, $N > 3$, is it still true that it contains 27 lines?
6
Resolution of Gorenstein rational singularities on a surface
5
Cubic surfaces and configurations of 6 points
6
Root lattices and (resolutions of) singular cubic surfaces
Question feed