A good place to read about uniform spaces

I'd like to learn a bit about uniform spaces, why are they useful, how do they arise, what do they generalize, etc., without getting away from the context of general topology. I have to prepare an 1h30min talk on the subject, for an audience formed in standard general topology (i.e. Munkres), not so much in abstract algebra (so I'd like not to use topological groups).

The references I have are Kelley or Willard texts on Topology, Isbell's "Uniform Spaces" and James's "Topological and Uniform Spaces".

I discarded the last one because of its heavy use of filters from the beginning. I don't know about any other good references. What I'd like to see is the subject treated as Munkres does in his book: he gives good motivations, pictures, and is gentle to the reader.

Once this is formalized, one can define the notion of Cauchy net in a uniform space (which is something you cannot do for general topological spaces). This leads to the notion of completeness of course (every Cauchy net converges to at least one point), although the theory is much cleaner for complete Hausdorff uniform spaces, where you have convergence to at most one point as well.

To illustrate this: the Cauchy completion of a uniform space $X$ can be defined in the usual way via equivalence classes of Cauchy nets. It is a complete Hausdorff uniform space $\bar{X}$ together with a map $i: X \to \bar{X}$ which satisfies a universal property: given a complete Hausdorff uniform space $Y$ and a uniformly continuous function $f: X \to Y$, there is a unique uniformly continuous map $\bar{f}: \bar{X} \to Y$ such that $\bar{f} \circ i = f$. (If you omit "Hausdorff" or "uniformly", you lose the universal property, which is arguably the point of the completion.)

The nLab has an article on uniform spaces with some material not included in the Wikipedia article.

For a general audience it can be interesting to know that uniform spaces are just one of two opposite generalizations of metric spaces. Measuring distances with the help of metric, we can be interested in points lying on small distance (and exactly this aspect interests specialists in uniform spaces) but also is points lying on large distance (this is the subject of coarse geometry). So, uniform and coarse spaces are two opposite generalizations of metric spaces, corresponding to two ends of the real half-line $(0,\infty)$. Both of them allow us to compare distances between points without using real numbers.

Uniform spaces and coarse spaces have dual definitions. Both of them are pairs $(X,\mathcal U$) consisting of a set $X$ and a family $\mathcal U$ of subsets $U\subset X\times X$ containing the diagonal but uniform spaces obey the axioms:

In fact, the structure of a uniform (coarse) space is the most general structure which allows us to speak about uniformly continuous (resp. coarse) maps whose $\varepsilon$-$\delta$-definitions were known in analysis long before the appearence of uniform (or coarse) spaces. And this was the reason for introducing uniform or coarse spaces.

Concerning the references, for me the basic reference in uniform spaces is Chapter 8 of Engelking's book "General topology" and for coarse spaces the book "Lectures on coarse geometry" of J.Roe.

For a bit deeper questions related to uniform or coarse spaces, which can be interesting for general audience, I would recommend the problem of dimension. Why does the space $\mathbb R^n$ have dimension $n$ and in which sense? In fact, there are many deep answers to this question in many various categories having $\mathbb R^n$ as an object (in particular, in the category of linear spaces, rings, metric spaces, topological spaces, etc).

The categories of uniform and coarse spaces also have their own definitions of dimension, which are dual in some sense and yield the same dimension $n$ for the space $\mathbb R^n$.

These two definition have only one change in quantifiers but "look" in different directions -- uniform dimension takes small $U$, but the coarse direction takes large $V$! 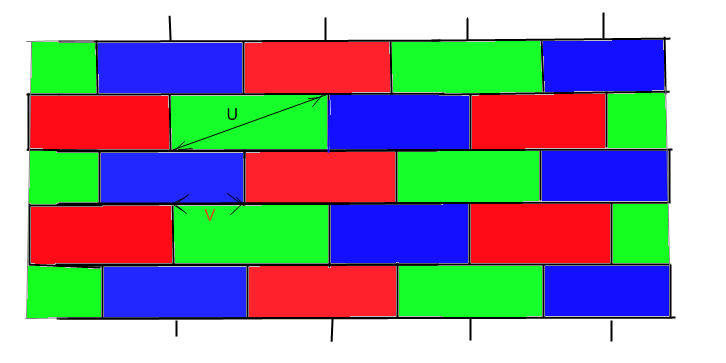 To sell uniform spaces in a single presentation requires above all some convincing motivation. Why develop all this machinery as a generalization of metric spaces? What nontrivial examples require such an artificial-looking development?

The Wikipedia entry here is accurate as far as it goes, though as usual the references and examples are inadequate. As that article points out, uniform spaces were introduced by Weil in 1937 (applied in his 1940 monograph L'integration dans les groupes topologiques et ses applications). Bourbaki gave a reasonable but rather formal treatment of the foundations in early chapters of their book on general topology.

Without topological groups as examples, it's tough to offer enough motivation. For me the reason to look at uniformities was the need to understand the approach of Serre and others (Bass, Milnor, Matsumoto, Prasad, Raghunathan) to the Congruence Subgroup Problem for algebraic groups over number fields such as SL$(n,\mathbb{Q})$. Here one has two natural subgroup topologies, with fundamental systems of neighborhoods of the identity given by all arithmetic subgroups or just by congruence subgroups. Profinite completion by itself isn't enough to formulate the problem precisely, so completion relative to a uniform structure comes into play. There is an elementary introduction to these ideas in Section 16 of my old Springer Lecture Notes 789 Arithmetic Groups.

How do they arise &c: metrization theorems are certainly a natural source. Under this point of view, the "uniformization" of a topology may be seen as a first main step towards metrization. Furthermore, topological groups and topological vector spaces are very natural examples of uniform spaces that are not necessarily metrizable. Actually, they could provide a nice source of examples for your seminar too; some theorems or constructions about uniform spaces take a particularly simple form in the case of TG and TVS. You may e.g. sketch the construction of a metric for a first-countable Hausdorff TVS (if, in such a topological vector space $X$, the family $\{U_n\}_n$ is a base of symmetric neighborhoods of the origin such that

Why not try Weil's original paper: it's reference 12 in this paper.

About motivation. (Late answer, sorry) I don't know what you have chosen and how it went, but had I have found your question in time, I would have recommended pseudometrics. Your audience knows metric spaces ? they must feel very well pointwise convergence then (say for real-valued functions on a set $X$). But, if the base set $X$ is not denumerable it cannot be explained by a single metrics but by very simple pseudometrics (defined through the coordinate functions).

About place to learn uniform spaces. I would recommend Bourbaki, General Topology, because they give as well the equivalence with pseudometrics, the categorical (without saying) view of completion and the motivation by topological groups.

Not the answer you're looking for? Browse other questions tagged reference-request gn.general-topology uniform-spaces or ask your own question.

5
A Mackey-Ahrens theorem for uniform spaces?