Which (semi)regular polyhedra are combinations of two others? 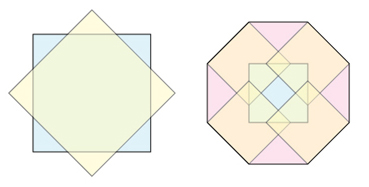 Of special interest to me are (a) convex polyhedra in $\mathbb{R}^3$, (b) combinations of just two polyhedra, and (c) where both are regular or semi-regular. For example, the truncated cuboctahedron (a.k.a. the great rhombicuboctahedron) "is the Minkowski sum of a cube and a truncated octahedron" (quoting from a paper ["Zonohedra and Zonotopes"] by David Eppstein) . (It is also the sum of three cubes!)

My question is, essentially:

I've searched around for a definitive tabulation of this information without success. It must be all known?

Particular subquestions and generalizations include:

I can make (informed?) guesses and proof sketches for several of these questions, but would prefer to defer to the experts. Any observations on any aspect of these (sub)questions, references, comments, would be appreciated. Thanks!

As for the interpretation using Minkowski sum, I could observe the following decompositions of Archimedean solids

I think the whole list of Gjiergji (and lightly more, see below) follows from Wythoffian operations. For the cube-octahedron family, for example, consider the following diagram: 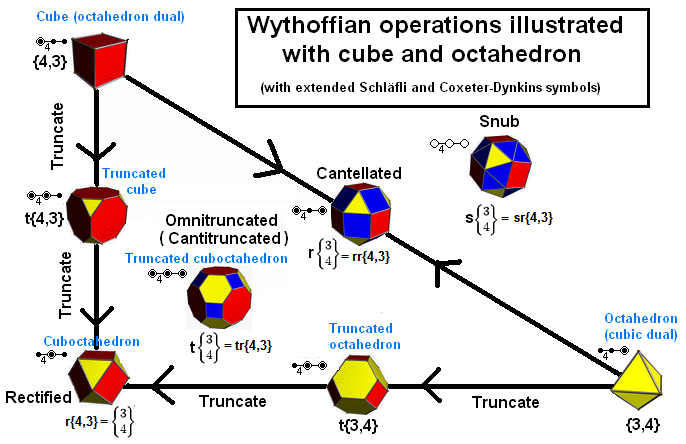 The polyhedron along an edge of the triangle is the Minkowski sum of the two vertices of that edge, which gives:

Not the answer you're looking for? Browse other questions tagged reference-request mg.metric-geometry discrete-geometry convex-polytopes polyhedra or ask your own question.

15
Are the Platonic solids shadows of 4-polytopes?
9
Regular polygon shadows of convex polyhedra
4
regular polyhedra (and polytopes) in hyperbolic geometry, and generalisations
3
Unit-Distance Polyhedra
24
Why do some uniform polyhedra have a “conjugate” partner?
8
The “Johnson polychora”
5
Classification of vertex-transitive zonotopes
16
Can I build infinitely many polytopes from only finitely many prescribed facets?
Question feed