Strict transform does not modify the Normalization

I have a question about a reduction step in proof of Lemma 10.1.24 from Qing Liu's Algebraic Geometry and Arithmetic Curves on page 463: 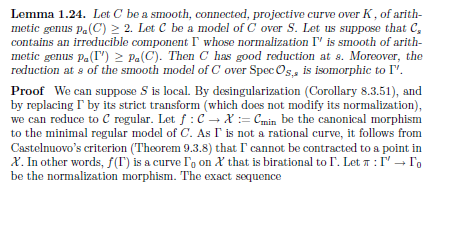 Firstly we reduce to $S$ local, but then we replace $\mathcal{C}$ by it's desingulariation (which exists). Reason: because replacing $\Gamma$ by it's strict transform does not modify it's normalization.

Question/Problem: I don't completely understand the last reduction argument. $\Gamma$ was assumed as an irreducible component of closed fiber $C_s$ of structure map $\mathcal{C} \to S$ and it's normalization $\Gamma'$ is smooth.

The composition $T' \xrightarrow{n_T} T \hookrightarrow \mathcal{D} \xrightarrow{\pi} \mathcal{D} $ factorize over $\Gamma$ thus we obtain a birational map $b: T' \to \Gamma$. Since $T'$ by construction is normal we use iniversal property of normalization map $n_{\Gamma}: \Gamma' \to \Gamma$ and obtain a birational map $f: T' \to \Gamma'$ of regular curves. Why is $f$ an isomorphism? That is why as Liu said the strict transform does not modify the normalization of $\Gamma$?