The tubular neigborhood can significantly alter the metric, e.g., the tubular neighborhood of a nearly closed circle can suddenly include the circle itself. However, I suspect that such information would be encoded by $s$ and $\epsilon$, and that for $\sigma$ sufficiently small (according to these parameters), the path from $x$ to $y$ in $M_\sigma$ travels `near' the path from the (not necessarily unique) projections of $x$ and $y$ on $M$, and the length of these paths will then be similar.

I could believe that similar problems have been investigated before, but I don't find any helpful references. It would be great if someone could point out some possible directions on this problem.

Sketch of the proof:

With the clarification given in the comments, what you are asking is if there is a bound on $d_{GH}(M, M_\sigma)$ which tends to $0$ as $\sigma\to 0$. This question has negative answer. An example is given by $M$ which is the comb space: 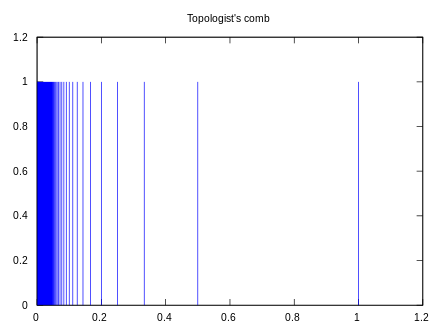 One way to define the GH distance is via distortion of bisurjective correspondences:

$M$ is $\epsilon$-dense in $M_\sigma$ and $f$ satisfies (for all $a, a'\in M$) $$ \frac{\sigma}{\epsilon}d_M(a, a') - \sigma\le d_{M_\sigma}(f(a), f(a'))\le d_M(a, a'). $$ The multiplicative (Lipschitz) factor $\frac{\sigma}{\epsilon}\ne 1$ in the LHS makes all the difference. This is the difference between the GH distance and quasi-isometries mentioned by in Henry's comment. The attempt to estimate (from above) the GH distance made in your post will also result in a map with such multiplicative factor $\ne 1$ and that just is not good enough. One can define a measure of closeness between compact metric spaces using quasi-isometries instead of the GH-distance. I do not know if it is useful for anything. If you are content with, say, $C^2$-smooth compact submanifolds $M$ instead of general compact subspaces then, indeed, you get GH-convergence $M_\sigma\to M$.

For more on the topic, see this question and

There are several other questions one can ask along the lines of your post. The more interesting of these is:

Do not fix the dimension of the ambient Euclidean space, but assume that the extrinsic diameter of $M$ is $\le D$. Is there a uniform upper bound on $$ \liminf_{\sigma\to 0+} d_{GH}(M, M_\sigma) $$ in terms of $s, \epsilon$ and $D$? This question also has a negative answer but examples are harder; they use the comb space as one of the building blocks.

Edit. Here is a correct phrasing of your question:

Now, this question has positive answer:

Not the answer you're looking for? Browse other questions tagged mg.metric-geometry path-connected or ask your own question.

14
What are the tricks for computing/estimating Gromov-Hausdorff distance?

15
Does Gromov's Waist Inequality imply Borsuk-Ulam?
7
Distance function to a submanifold
2
Is there a curve on a surface where an integrable function is pointwise bounded?
4
Approximating a length metric from below with Finsler metrics
8
Two definitions of horofunction for Gromov hyperbolic spaces
6
Quasi-isometric embedding of graphs in non-compact riemannian surfaces
2
Is the point giving the width in strictly convex surface a cut point?
Question feed