How to mathematically characterize a feedback loop in ODEs?

Edit 2: the production of $y$ does not consume $x_2$, just the materials floating in the environment. $x_2$ acts like a machine that takes those materials to make $y$. The schematic is a simplified diagram of the transcription-translation processes for DNA-RNA-protein. 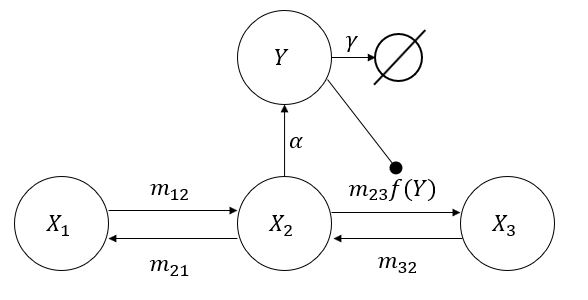 The standard biological description would categorize the process involved $y$ as a positive loop. In fact, the underlying biological process is known to exhibit a "positive feedback loop". But this does not make logical sense. My observation is that as $y$ increases, $f(y)$ increases, leading to a higher transition rate from $x_2$ to $x_3$; however, it is not clear that would lead to either an increase in $y$ or not. Furthermore, it seems that whether this is a positive or negative feedback loop relies on the relative ratios of the other transition rates. Numerically, I thought of characterizing the loop as the ratio between $\frac{dy/dt}{d^2y/dt^2}$, for instance, if $\frac{dy/dt}{d^2y/dt^2} > 0$, then I have a positive feedback loop and vice versa.

My question is: how do I characterize whether $y$ is involved in a negative or positive feedback loop?

I found a similar concept based on the Jacobian matrix that is used to characterize "qualitative stability", but I don't think it is quite the same. I have searched through many system biology/math-bio references, but I have not found such materials. If there is some standard method for such characterization, please help point me to the right references. Thanks in advance!

Edit 1: I believe the standard qualitative stability theory states that in general, stability will follow in a negative feedback loop (for instance, page 240 of Leah Edelstein-Keshet's Mathematical Models in Biology). Hence, I think it may be more precise for me to ask for a mathematical characterization of a "self-activating" or "self-inhibiting" loop involving the $y$ compartment.

Edit 3: As Alexandre Eremenko pointed out, I should explain the question and motivation from a mathematical point of view. The current theory of qualitative stability uses a linearized characterization of the feedback loop (either a self-inhibiting or a self-activating loop). In this example, this is equivalent to looking at $\partial Y'/\partial Y = -\gamma < 0$. Hence, $Y$ is concluded to be in a negative feedback loop. However, this is not the case (at least for some situations). A better description would involve the sign of $Y'/Y''$, which is better and allows for more possibilities but is still only an approximation. Thus I would like to ask if there is a way to mathematically characterize the feedback loop of $Y$ without the need for approximation.

In fact the system decouples: the first 3 equations are independent of $y$.

Since one negative root of the characteristic polynomial, namely $-\gamma$ factors out, the question is reduced to stability of a cubic polynomial.

Edit. In fact no computaton is necessary: the 3 times 3 upper left submatrix is a Jacobi matrix, and always has negative eigenvalues.

1
How many ways can we characterize gamma function?
36
Do these properties characterize differentiation?
3
Is there a complete countable axiomatization of conditional independence? (Graphoids)
7
How to study the global stability for this 3D system?
4
Riemann $P$-symbol for ODEs
0
Lorenz ODEs with negative parameters
2
Solution of Riccati system of ODEs
4
Reference request: Rigorously solving ODEs using divergent asymptotic series
2
Examples of ODEs with complex constant coefficients and applications to physics?
Question feed