Digraphs with exactly one Eulerian tour

I’ve been thinking about the following problem from Richard Stanley’s list of bijective proof problems (2009). There, this problem is said to lack a combinatorial solution. The problem is the following:

I tried to find some approaches to it on the internet without much success. Some things I observed about such digraphs are that they must be connected, balanced, the outdegree of a vertex is either 1 or 2, and in the case that all vertices have outdegree 1 we obtain $(n-1)!$ digraphs (corresponding to all the possible ways to arrange the vertices in a cycle).

Since Richard Stanley’s list is from 2009, I wonder if anyone knows of a combinatorial solution to this problem or any papers that discuss it. It would also be helpful if someone knew the algebraic solution to this problem, or another property that such graphs follow. Maybe a solution can be achieved combining the BEST Theorem and the Matrix-Tree Theorem?

Regarding enumeration, one possibility would be to count rooted graphs with the above property; there seems to be a bijection with labeled rooted plane trees (each directed cycle goes through a node and all its children from left to right).

Here is a combinatorial proof I found.

First, note that this is equivalent to allowing loops but demanding that all vertices have indegree and outdegree 2 (add a loop to each vertex of in/outdegree 1). This formulation will be more convenient.

Now we construct a bijection between the set of such digraphs with identified edge and the set of valid ways to arrange $n$ distinguishable pairs of open/close parentheses (of size $n!\cdot C_n$), showing that the number of such digraphs is $\frac{(n-1)!\cdot C_n}{2}$. 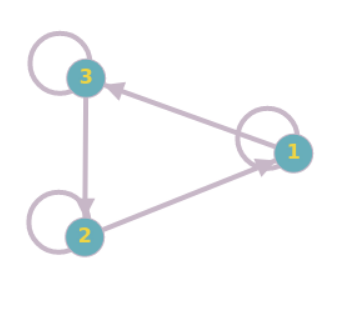 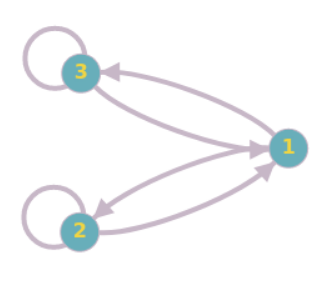 We just have to show that the resulting digraph indeed has a unique eulerian circuit (which correspond to the order of the parentheses in the string). Let the string of parentheses have the form $\cdots ?_\ell (_i (_j \cdots )_i ?_k \cdots$, where $?$ represent either a close or open parenthesis. We have to show that if we enter vertex $i$ from $\ell$, we must exit it towards $j$, not $k$. Suppose, for the sake of contradiction, that we exit it towards $k$. Note that, by properties of valid parentheses arrangements, the two parentheses corresponding to vertex $v\ne i$ are either both between $(_i$ and $)_i$ (then we will say that $v$ is of type $A$) or both outside (type $B$). Since $k$ is of type $B$ and the only way to go from a vertex of type $B$ to a vertex of type $A$ is through $i$, we must eventually enter $i$ through a vertex of type $B$ in order to access vertices of type $A$. The only way to do so, however, is through edge $\ell \to i$, which we already used. This is a contradiction, so the uniqueness of the eulerian tour is proved.

Since it is clear that the two maps we described are inverses of each pother, we constructed an explicit bijection between valid edge-pointed digraphs over the vertex set $[n]$ and valid ways to arrange $n$ distinguishable pairs of open/close parentheses, making clear the presence of Catalan numbers. Note that we could also have avoided the identification of an edge of the digraph by considering parentheses strings up to cyclic shift (the property of being a valid parentheses arrangement is invariant by cyclic shift, if we allow ourselves to flip the parentheses so that the first one of each pair is open and the second is closed).

Not the answer you're looking for? Browse other questions tagged co.combinatorics graph-theory directed-graphs or ask your own question.