Question 1: Is there a polygon $P$ that

Basically, with copies of $P$ alone we should be able to form a layout with gaps which are all similar in shape to P and of different size(s).

Motivation: In basic tiling, we are constrained to use congruent copies of a candidate polygonal region (congruent up to some isometry) to fill the plane without gaps. Here, we consider relaxing the constraint to allow scaled copies of the candidate region and try to see whether this relaxation can non-trivially improve the chance a candidate region has of being a tile.

Note: Two cases to this question – $P$ is convex and not necessarily so.

Question 2: Is there a $P$ such that it is not a rep-tile but a large copy of $P$ can be tiled by several units all similar to $P$?

Since I didn't know any better way to show it does not tile the plane, I brute-forced my way through some case distinctions.

The only non-convex corner of any tile must meet a corner of another tile. It can't be either of the two bottom corners or the top right corner (the "unoccupied angle" would be too small to fit another corner in). If it is the top left corner, then we end up in the situation sketched below in the left picture. If it is the rightmost corner, then the result is the right picture below. 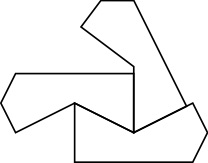 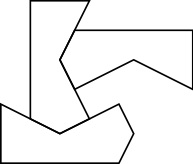 In both cases we clearly cannot complete the partial tiling to a tiling of the whole plane.

On the other hand, we can tile a strip in $\mathbb R^2$ with scaled copies of our polygon as follows.

Edit: Here's another shape (essentially based on the same principle).

The proof that it doesn't tile the plane is similar to above, but we can get rid of most of the casework due to symmetry. Tiling with two different sizes is again possible.

As noted in the comments, cutting the "bowtie" tile along the central symmetry axis solves the convex version of Question 1. Also note that Rao's preprint shows that only pentagons from belonging to one of 15 families tile the plane, and we can choose the bowtie such that the resulting pentagon belongs to none of them.

Edit 2: I just found out that this convex solution is also presented in Figure 3 in this paper from 1982.

Here is an answer to Question 2. The following shape (attributed to Karl Scherer on this website) tiles into similar shapes of different sizes. 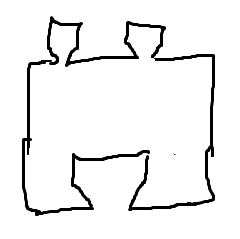 This tile $P$ tiles an open half-plane in a hyperbolic fashion. It's "tiled" in the sense that it's a union of copies of tiles similar to $P$ with disjoint interiors. So you can sort of tile the plane with tiles similar to it, you miss just one line. More interesting (and probably what you meant) is what happens if you restrict to finitely many similar copies of $P$, since I guess any polygon's similar copies tile a full measure subset of the plane.

I should probably also add Paint as an answer to Time-saving (technology) tricks for writing papers . 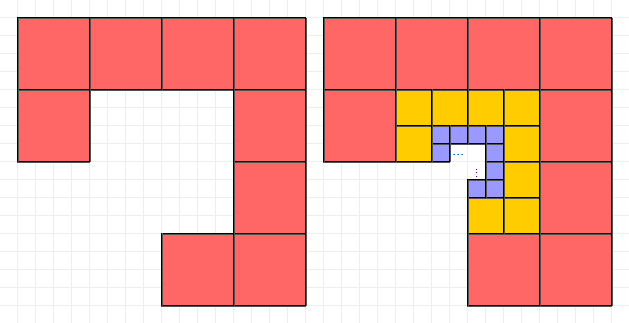 Are you willing to allow tiles with fractal boundary? (I can see that you write "polygon" throughout, so maybe not?).

If so, then another example is the so-called "Koch snowflake". See https://en.wikipedia.org/wiki/Koch_snowflake#Tessellation_of_the_plane . If you allow such tiles, then this is also a positive answer to your Question 2.

Another family of fractal examples is provided by Thurston's famous unpublished notes: