On reflection properties of convex regions

It is well known that any ray of light passing thru a focus of an ellipse will pass thru the other focus after a single reflection from the ellipse boundary. If $A$ and $B$ are the foci of an ellipse, this property of rays holds both ways (those passing thru $A$ meet at $B$ and vice versa).

Note 2: If not explicit constructions, even existence/non-existence arguments could be sought as answers to these questions. One can also ask if relaxing convexity has any implications.

I will assume your regions are closed and have differentiable boundary, otherwsie reflections are not defined for certain directions.

The answer to Question 1 is no: the reflection property you are interested in is symmetric in $A$ and $B$.

By hypothesis, every ray through $A$ reflects through $B$ after hitting the boundary once. This is the same as saying that for every $x$ on the boundary the directions $f_A^{-1}(x)$ and $f_B^{-1}(x)$ form the same angle to $n_x$. The statement is symmetric in $A$ and $B$, so your condition holds for all reflections from $A$ to $B$ if and only if it holds for all reflections from $B$ to $A$.

The answer to Question 2 is also no: at some point the two reflections must collapse to one.

Indeed, consider any convex region and let $f_A(v)$, $f_B(v)$ and $n_x$ as before. Because the boundary is closed and differentiable and the region is convex, there must exist an $x$ on the boundary such that $n_x = -f_A^{-1}(x)$, i.e. a ray from $A$ towards $x$ reflects back through $A$. Either $B$ is on the way of the reflection, in which case we're done, or the ray must pass through $A$, hit the boundary again at another point $y$ and from there reflect through $B$. But then the ray from $A$ in direction $f_A^{-1}(y)$ reflects at $y$ and then goes through $B$ after a single reflection.

The answer to Question 2 can become yes if some assumptions are relaxed. In the example(s) below, we must allow a finite number of directions in which the second focus is hit only after a single reflection (because of the the no-go result above).

For this first example we have to allow the points A and B to coincide (must as the circle is a degenerate case of an ellipse where the foci coincide). Then the answer is yes: joining two parabolic arcs with the same focus and axis of symmetry (but opposite vertices wrt the focus) always yields a convex shape with the desired property. Indeed, every ray from the focus (point A) will reflect exactly twice before reaching the focus again (point B), with the exception of two rays parallel to the axis of symmetry of the parabolas. Note that the two rays orthogonal to the axis of symmetry of the parabolas hit the boundary in a non-differentiable point, but the reflection is nevertheless well-defined by continuation. 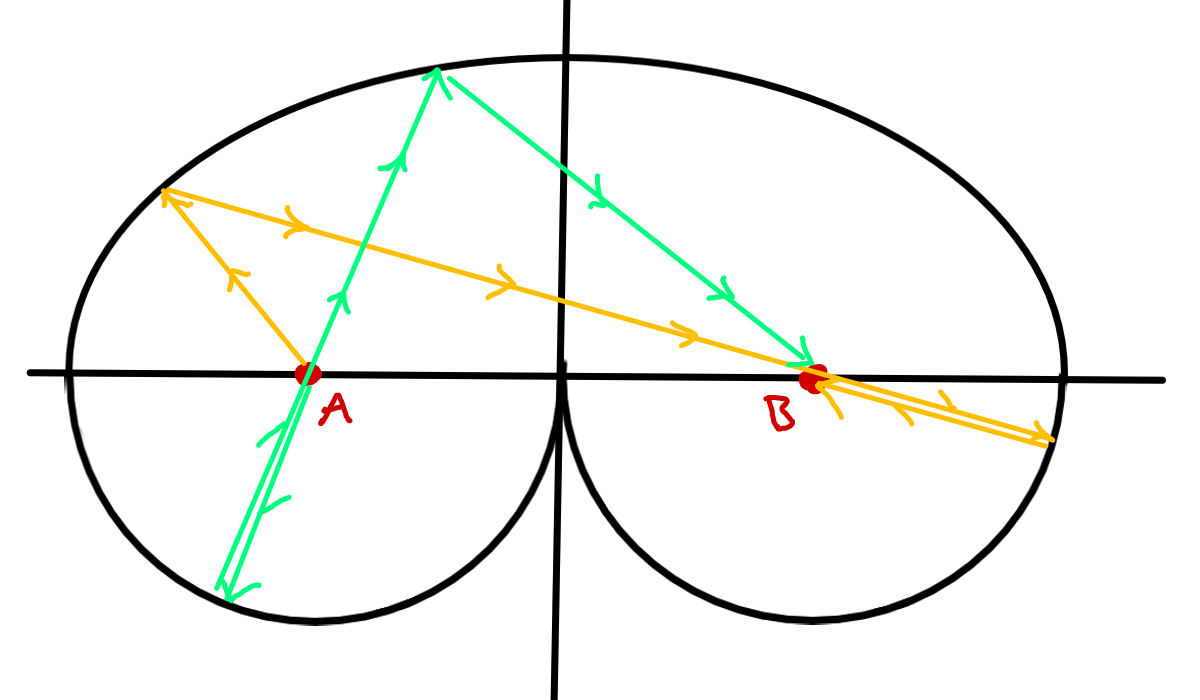 It may interest you to know that this property fails in curved spacetimes: a ray starting at $A$ in direction $v$ may follow a path which ends at $B$ in direction $w$, but light starting at $B$ in direction $-w$ might not even reach $A$ at all. As a pictoresque (and extreme) example of this, consider light falling radially into a Schwarzschild black hole: rays starting a point $A$ outside directed radially towards a point $B$ inside will reach $B$, but rays starting from $B$ inside directed radially towards the point $A$ outside will never reach $A$.

The answer to question 1) is no:

Since R was arbitrary, any ray passing through B will reflect off C and pass through A.

For question 2) a good example is to take two parabolas facing each other with a common axis, where the parabolas intersect at points A and A':

Rays through the focus of either parabola, not passing through A or A' or hitting the other parabola first will be reflected twice and then pass through the other focus. If we move the foci apart we can get an arbitrarily large percentage of directions to work.

Thus the answer to 2) is yes if we allow an arbitrarily small percentage of rays from each focus to be excluded. This is the 2-way version.

Note that we can prove that such any example has to be 2-way in the same way as we did for question 1).

Not the answer you're looking for? Browse other questions tagged convex-geometry plane-geometry or ask your own question.