Is a polytope that has in-spheres for faces of all dimensions already regular?

Let $P\subset\Bbb R^d$ be a convex polytope (convex hull of finitely many points). A $k$-in-sphere of $P$ is a sphere centered at the origin to which each $k$-face of $P$ is tangent. So a 0-in-sphere contains all the vertices and is actually a circumsphere, and a $(d-1)$-in-sphere is completely contained in $P$. 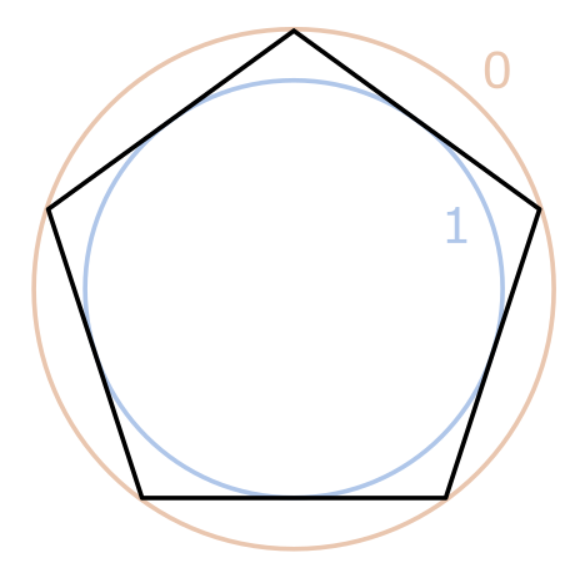 By definition, all these spheres are centered at the origin, hence are concentric.

The answer to the question is Yes for polygons. For $d\ge 3$ note that this property of $P$ is inherited by its faces, and it follows that all 2-faces of $P$ are regular polygons and all edges are of the same length.

This is true in all dimensions, and can be proved by induction (on $d$) applied to the following (slightly stronger) hypothesis:

As the boundary $\partial P$ (i.e. the union of all facets) is homeomorphic to $S^{d-1}$, we can reach any facet $Q_1$ from any facet $Q_0$ by a 'path' of 'adjacent' (i.e. sharing a common subfacet) facets. Consequently, we can transform any facet into any other facet by a sequence of reflections in hyperplanes through the origin. As each facet is flag-transitive, it therefore follows that $P$ is flag-transitive (i.e. regular) as desired.

Moreover, this reflection procedure of building $P$ from a single facet $Q$ establishes the third part of the theorem.

This leaves the second part of the theorem. Suppose $P$ and $P'$ are two polytopes sharing the same set of $k$-in-spheres. Let $Q$ be an arbitrary facet of $P$, and $Q'$ be an arbitrary facet of $P'$. By the inductive hypothesis, $Q$ and $Q'$ are congruent; let $f$ be an isometry of the ambient space which maps $Q$ to $Q'$. The origin is either mapped to itself or (if we chose the 'wrong' isometry) to $2v$, where $v$ is the centroid of $Q$; we can if necessary reflect again in the hyperplane containing $Q$ to ensure the origin is preserved by $f$. Consequently, $f$ is an element of the orthogonal group $O(d)$ which maps $Q$ to $Q'$. By the third part of the theorem (which we've already proved), $f$ must map $P$ to $P'$, establishing the second part of the theorem.

In $R^3$, since the spheres are concentric, not only all faces are regular, but also all edges are of the same length, and all faces are inscribed in circles of the same radius, hence are congruent. Also, all dihedral angles between faces with a common edge are equal, which implies that all vertices are of the same valence. This makes the polytope regular. It seems that this reasoning can be generalized to all dimensions.

Not the answer you're looking for? Browse other questions tagged mg.metric-geometry discrete-geometry convex-polytopes convex-geometry polytopes or ask your own question.

13
How many vertices/edges/faces at most for a convex polyhedron that tiles space?
3
Vertex-transitive polytopes in any dimension with any number of vertices?
7
Is every polytope combinatorially equivalent to the intersection of a simplex and a linear subspace?
3
Is a vertex- and edge-transitive polytope already a uniform polytope?
1
Is a polytope with vertices on a sphere and all edges of same length already rigid?
3
Are there any more polytopes whose 2-faces are identical 4-gons?
5
Classification of vertex-transitive zonotopes
5
Is there a 4-polytope without 3-gonal and 4-gonal faces, other than the 120-cell?
5
A polytope with congruent facets and an insphere that is not facet-transitive?
2
Is there a non-orthogonal linear deformation of a polytope that preserves edge-lengths and vertex-origin-distances?
Question feed