Hanging a cube with string

This is a variation on a (much) earlier MO question, Hanging a ball with string. Here instead the task is to arrange a net of string to hang a unit cube. Assume:

The aspect that I do not know how to formalize is slipping-out. Intuitively I want it to be robust under nudging. Formally there should be a requirement that the cube live in some positive radius ball in a configuration space such that within that ball, the cube remains confined by the net. 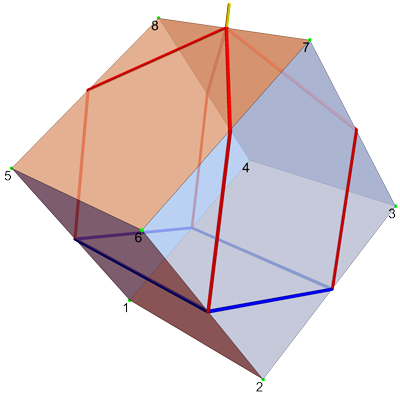 I offer two nets as examples to improve. In the first above, the blue rectangle corners are at edge midpoints, and the four red paths to the attachment point are geodesics. This net seems to satisfy the no-slipping-out condition, and I have verified this is optimal among nets that slide the blue rectangle corners in concert up or down those cube edges. But many aspects are unclear. In particular:

Q1. Remove one red path, leaving the other three. Can the cube now slip out? Note the blue paths are not geodesics, in that they do not unfold straight around a corner. 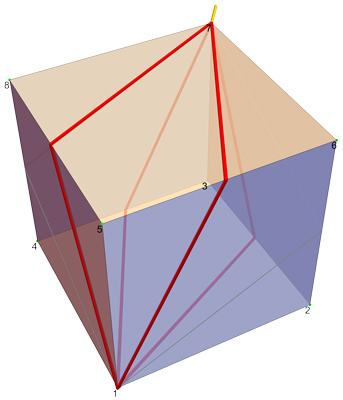 Q3. What is a more formal definition of the no-slipping-out condition that captures the intuition, and allows settling some of the questions above?

Of course the main question is: What is the minimum length net?

Browse other questions tagged mg.metric-geometry classical-mechanics or ask your own question.

24
Hanging a ball with string

21
Coiling Rope in a Box
24
Hanging a ball with string
24
Covering a Cube with a Square
7
Wrapping a convex polyhedron with string
10
Path length of ball on tilted, perforated plane
3
Are there isomeasure simplices?
15
A cube is placed inside another cube
1
A possible characterization of the cube?
Question feed