This paper by Normann and Sanders apparently caused a stir in the reverse mathematics community when it came out a couple years ago. It says that Cousin's lemma, which is an extension of the Heine-Borel theorem, requires the full strength of second-order arithmetic (SOA) to prove. It also says this lemma is helpful in mathematically justifying the Feynman path integral. So this is an apparent counterexample to both

I don't exactly have a mathematical question about the Normann-Sanders paper, but would like to know if it has impacted the reverse mathematics program, and what its significance is seen as. Could path integrals really require such powerful axioms?

I can understand that the (second order) induction axiom from the Peano axioms translates naturally to the induction schema in first order PA, making induction proofs work about the same way as before. I'd be interested to know why analysis is identified with SOA instead of something that allows sets of reals (needed for functions anyway), since there's not such a straightforward translation of the completeness axiom. Analysis=SOA goes back a long way, since the Hilbert program aimed to prove CON(SOA) once it was done with the consistency of arithmetic. Reverse mathematics came much later.

Sam Sanders here, one of the authors of the paper you mention. Thanks for the nice words. I will answer your questions based on my personal opinion.

[...] would like to know if it has impacted the reverse mathematics (RM) program, and what its significance is seen as. Could path integrals really require such powerful axioms?

First of all, I cannot speak for the RM community. What I can tell you is that we have gotten all sorts of comments, negative and positive, from lots of (senior) people. I believe it is also fair to say that our paper (and related results) shows that coding even e.g. basic analysis in second-order RM does not accurately represent mathematics. There are those that disagree, as one would expect, but I would speculate people in RM have (on average) started working on "less coding intense" topics. Part of the problem is that second-order arithmetic cannot directly deal with functions from $\mathbb{R}$ to $\mathbb{R}$ that are discontinuous, which is discussed in detail in my "splittings and disjunctions" paper (see arxiv/NDJFL).

Secondly, regarding your question on "powerful" axioms. This ties in nicely with recent results Dag Normann and I have. In a nutshell, the usual scale for measuring logical strength (based on comprehension and discontinuous functionals) is not satisfactory for e.g. Cousin's lemma and we need a second scale, based on (classically valid) continuity axioms from Brouwer's intuitionistic mathematics. This new scale is a Platonist's dream: the canonical ECF embedding maps part of this new scale and equivalences to the 'Big Five' and their equivalences. In other words, the Big Five are merely a reflection of a higher-order truth!

Let me first sketch the main results in our paper pertaining to Cousin's lemma.

We work in the language of higher-order arithmetic. This means that all the below should be interpreted in Kohlenbach's higher-order RM and Kleene's higher-order computability (S1-S9). Not much specific knowledge of these frameworks is needed, however.

Clearly, HBU is a statement in the language of third-order arithmetic. The system $Z_2^\omega$ is also third-order in nature: it includes, for any $k \geq 1$, a third-order functional $S_k$ that decides $\Pi_k^1$-formulas from $L_2$ in Kleene normal form (see the work of Sieg & Feferman). The system $Z_2^\Omega$ is fourth-order, as it is based on Kleene's (comprehension) quantifier $\exists^3$ (see the work of Kleene on higher-order recursion theory). Note in particular that HBU is provable in ZF: countable choice is not needed.

There are many statements that exhibit the same (or similar) behaviour as HBU. I refer to e.g. our paper on Pincherle's theorem (APAL) and open sets (JLC), where whole lists can be found, as well as the original paper. Convergence theorems for nets in $[0,1]$ indexed by Baire space also behave like HBU (see my 2019 CiE and WolliC papers).

Now that we have established the results, let me explain what these results mean. Indeed, there is an apparent contradiction here: on one hand, HBU should be intuitively weak, but we need absurdly strong comprehension axioms to prove HBU. This feeling you express in your posting, I believe.

The fundamental problem is that we are comparing apples and oranges as follows:

An obvious follow-up question is:

What is a good scale for analysing non-normal theorems?

NFP is a classically valid continuity axiom from Brouwer's intuitionistic mathematics.
Fragments of NFP are equivalent to e.g. HBU and other milestone non-normal theorems, like the monotone convergence theorem for nets in [0,1] (called $\textsf{MCT}_{\textsf{net}}$ in the above paper). Note that NFP was introduced under a different name by Troelstra-Kreisel, and is mentioned in Troelstra & van Dalen.

Finally, the Kleene-Kreisel 'ECF' embedding is the canonical embedding of higher-order into second-order arithmetic. It maps third-order and higher objects to second-order associates/RM-codes, which reflects the 'coding practise' of RM.

where HBC is the Heine-Borel theorem for countable coverings of intervals.

Another example is the following:

In general, the Big Five equivalences are a reflection of higher equivalences under ECF as in the following picture: 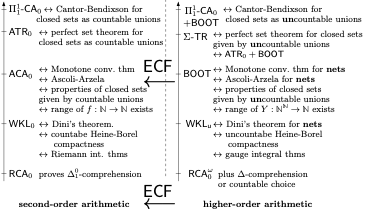 Since ECF is a lossy translation, this pictures resembles -in my not so humble opinion- the allegory of the cave by Plato. This observation is inspired by Steve Simpson's writings on Aristotle that can be found in the (RM) literature.

I would like to finish this answer with a history lesson: I have heard wildly inaccurate claims from very smart (RM) people about the history of mathematics. These claims are often used to justify the coding practise of RM. So let us set the historical record straight, while it still matters.

1) Hilbert and Bernays did NOT introduce second-order arithmetic. In the "Grundlagen der Mathematik", they formalise a bunch of math in a logical system $H$ (see esp. Supplement IV). This system involves third-order parameters in an essential way, as has been observed before by e.g. Sieg (see e.g. his book on Hilbert's program). Hilbert-Bernays vaguely sketch how one could perhaps do the same formalisation with less.

I was told that Kreisel then introduced second-order arithmetic based on the above.

3) The modern concept of function was already formulated by Dedekind and Lobasjevski in the 1830ies. (This view is not without its critics)

4) The gauge integral is more general than the Lebesgue integral. The main theorems (Hake and FTC) of the former in particular apply to any (possibly non-measurable) function. In this way, the development of the gauge integral does not need measure theory, but can instead be done similarly to the Riemann integral. To study the gauge integral restricted to measurable functions goes against its generalist/historical spirit, to say the least.

5) There are a number of formalism to give meaning to Feynman's path integral. The gauge integral is heralded as one of the few that can avoid 'imaginary time', a desirable feature from the pov of physics. This is briefly discussed on page 20 here:

References are provided, of course.

Sam's answer is, of course, the definitive one. For curiosity's sake, I'll mention that Rod Downey, Noam Greenberg and I have recently been looking at Cousin's lemma for restricted (i.e. cardinality $\mathfrak{c}$) classes of functions.

We have a proof of Cousin's lemma in $\mathsf{ATR}_0 + \Delta^1_2$-induction that works for "any function", to the extent that "any function" can be formalised in this system. This effectively gives an upper bound for Cousin's lemma for functions appropriately definable in second-order arithmetic. This doesn't contradict what Sam said above, since you need third-order arithmetic to talk about all functions, and then $\mathsf{ATR}_0 + \Delta^1_2$-induction is not enough.

These results are in my thesis as well as a joint paper we've written.

To answer the OP's questions, Dag Normann and Sam Sanders' results do contradict (a). But to me, this is not such a surprise. As Sam notes, arbitrary discontinuous functions can't be formalised in second-order arithmetic. So, to the extent that classical analysis deals with discontinuous functions, we can't even formalise it in second-order arithmetic, let alone prove its theorems in, say, $\Pi^1_1$-$\mathsf{CA}_0$. This just shows that SOA is sufficient for most, but not all, of mathematics (it can't really handle topology, set theory, etc).

As for (b), it also contradicts this, if you assume that it is really necessary to consider Cousin's lemma for arbitrary gauges. As Russell A. Gordon shows in his book, "The Integrals of Lebesgue, Denjoy, Perron, and Henstock", it is enough to consider measurable gauges, and maybe this can be further restricted to Borel gauges (I don't know). In that case, maybe $\mathsf{ATR}_0 + \Delta^1_2$-induction is enough for the physicists.

Not the answer you're looking for? Browse other questions tagged lo.logic reverse-math or ask your own question.

65
Mathematics of path integral: state of the art