John Horton Conway is known for many achievements: Life, the three sporadic groups in the "Conway constellation," surreal numbers, his "Look-and-Say" sequence analysis, the Conway-Schneeberger $15$-theorem, the Free-Will theorem—the list goes on and on.

But he was so prolific that I bet he established many less-celebrated results not so widely known. Here is one: a surprising closed billiard-ball trajectory in a regular tetrahedron: 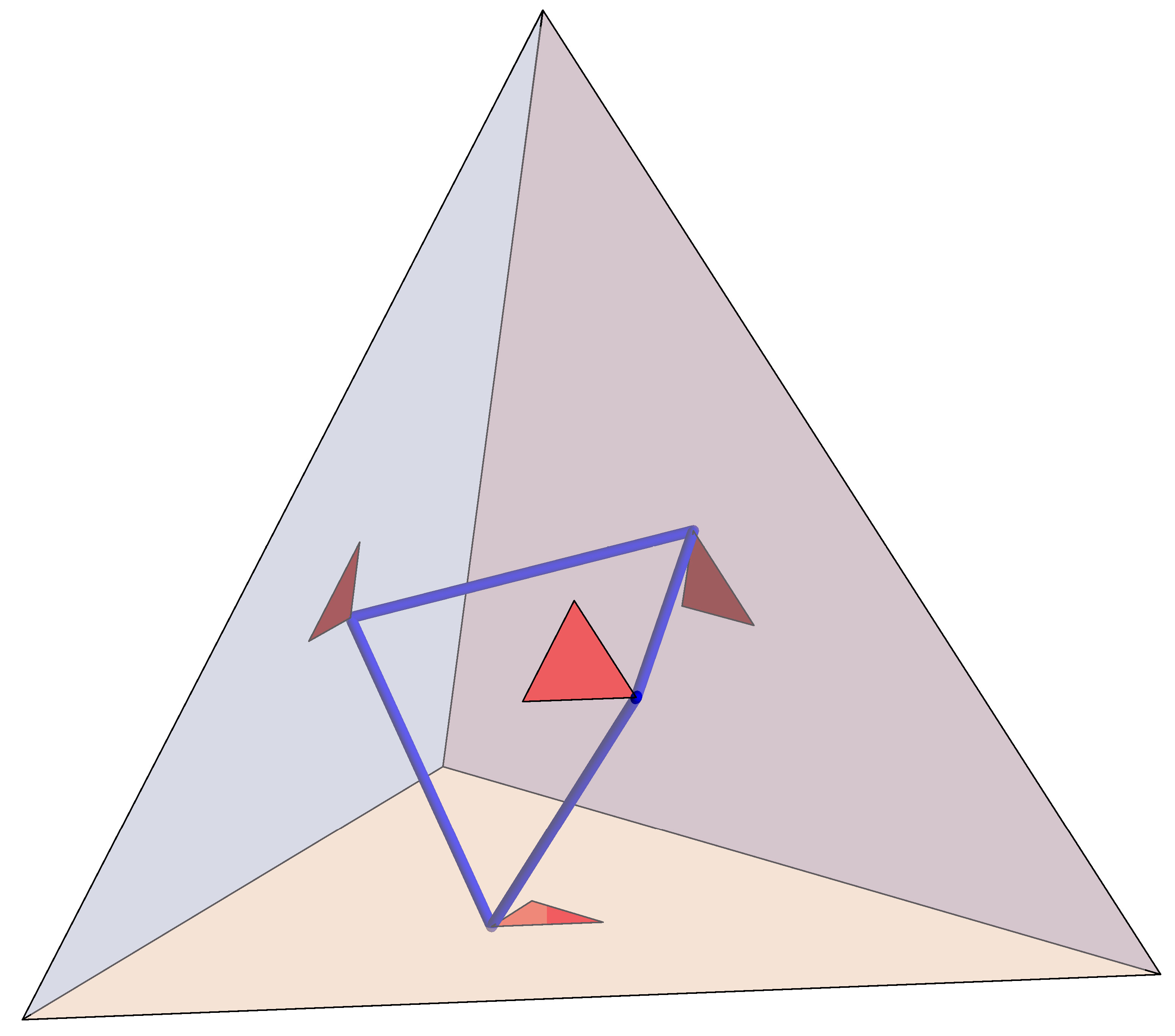 Q. What are other of Conway's lesser-known results?

Edit: Professor Conway passed away April 11, 2020 from complications of covid-19:

This puzzle has been popularized by Peter Winkler, and it has been discussed in one of Winkler's books. A full solution to the puzzle can be found in:

I believe that the theorem to which he referred to as the murder weapon has not been mentioned so far.

I first read about this peculiar contribution of his in the interview of I. Hargittai with him that appeared in the March 2001 issue of The Mathematical Intelligencer (pp. 7-14). This is what Conway told Hargittai about the theorem under discussion:

Coxeter came to Cambridge and he gave a lecture, then he had this problem for which he gave proofs for selected examples, and he asked for a unified proof. I left the lecture room thinking. As I was walking through Cambridge, suddenly the idea hit me, but it hit me while I was in the middle of the road. When the idea hit me, I stopped and a large truck ran into me and bruised me considerably, and the man considerably swore at me. So I pretended that Coxeter had calculated the difficulty of this problem so precisely that he knew I would get the solution just in the middle of the road. In fact I limped back afer the accident to the meeting. Coxeter was still there, and I said, "You nearly killed me." Then I told him the solution. It eventually became a joint paper. Ever since, I've called that theorem "the murder weapon" One consequence of it is that in a group if $a^{2} = b^{3} = c^{5} = (abc)^{-1}$, then $c^{610}=1$.

You can take a look at this previous discussion in MO if you feel like hearing of some additional exploits of his...

In addition to his well-known Doomsday Algorithm for calculating, he had thoughts on various other calendrical systems and dates, some of which are described here. In particular, he once told me (in person) about an algorithm that allowed him to convert between Hebrew and Gregorian dates in his head (which took him about 1.5 times as long as his Doomsday Algorithm).

I don't remember all the details, and I would love it if someone can please fill them in. I remember that there were three constants called "he", "she", and "it" that you have to memorize to do the computation.

Some brief mentions to this are found here and here, as well as p.388 of his biography.

It has been some time since I read about it and I find it difficult to find a reference for it but I recall Conway asked, if we call a triangular array of hexagons with $n$ hexagons along its sides $T_n$, which $T_n$ can be tiled by copies of $T_2$, which he named "tribones"?

The answer was some condition on $n$ modulo 12, proved via "Tiling Groups", but he remarkably showed that this result couldn't obtained through any colouring argument!

EDIT: It appears to be mentioned in this overview of tiling results and they provide a helpful illustration: 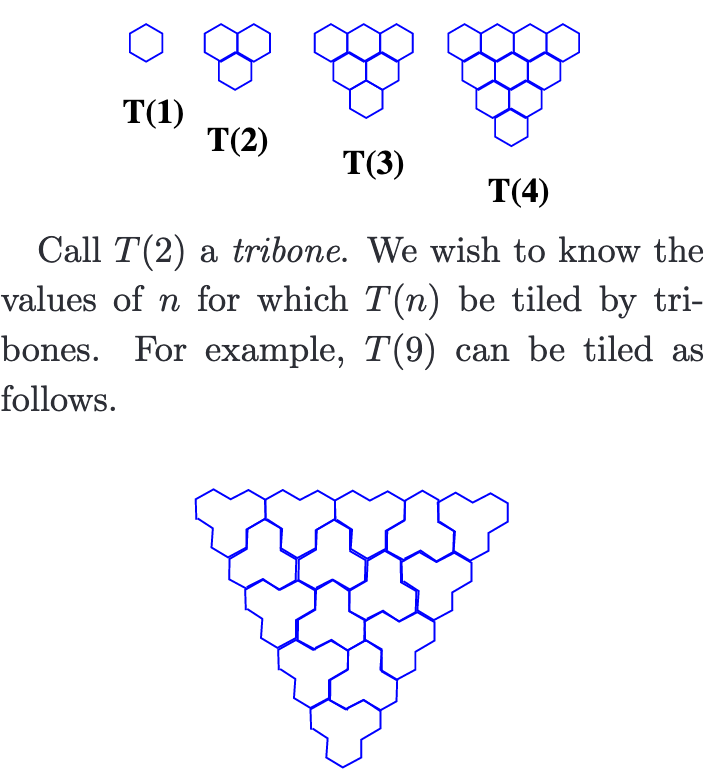 In "THE SEQUENCE SPACES $l(p_\nu)$ AND $m(p_\nu)$" by S. Simons there is the following theorem about sequence spaces of $l_p$-type with varying exponents which is attributed (without a more precise reference) to H.T. Croft and Conway:

They are nice because they satisfy a certain compatibility condition with respect to subfields (i.e., fields of order $p^m$ with $m$ dividing $n$). Formally, the Conway polynomial for $\mathbb{F}_{p^n}$ is defined as the lexicographically minimal monic primitive polynomial of degree $n$ over $\mathbb{F}_p$ that is compatible with the Conway polynomials of all its subfields (see Wikipedia for more details). Of course, imposing the lexicographical ordering is a convention and is necessary to make them unique.

Conway polynomials are very useful when performing computations using computer algebra systems. They also provide portability among different systems. Computing them in general is hard, however for many small cases they have been tabulated (e.g., see the extensive tables computed by Frank Lübeck). These tables are available, for example, in Sage.

Not the answer you're looking for? Browse other questions tagged reference-request ho.history-overview or ask your own question.