It is usual to introduce Fréchet and Gâteaux derivatives in Banach spaces. In this context, the familiar Taylor expansion with remainder is also at hand, as you can see on the picture below taken from this reference. 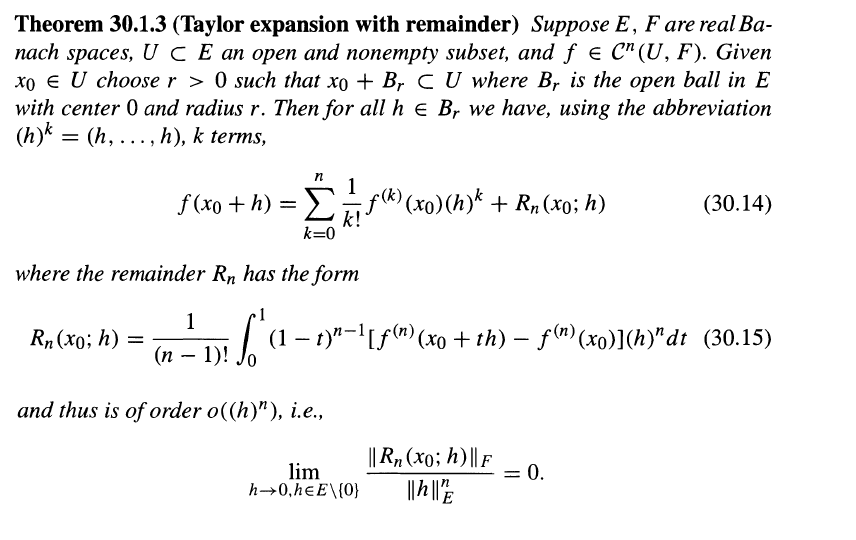 Now, I'd like to know if there exists an analogous theorem for locally convex spaces and where should I go to learn it if this is the case. Do we need Fréchet and Gâteaux derivatives as well? Any comments would be helpful. Thanks in advance!

Before we come to the bad news, some comments on differential calculus beyond Banach spaces. Frechet derivatives make no sense beyond Banach spaces (again the norm condition breaks ones neck) and there are several (beyond Frechet spaces mutually inequivalent) ways of doing calculus in locally convex spaces. You can choose among dozens of approaches (all summarised in H.H. Keller: Calculus in locally convex spacesa), but most people stick with one of the following approaches: 1. The convenient calculus (popular since Kriegl and Michors book: The convenient setting of global analysis, from 1998 available online here 1 ). To my knowledge this does NOT feature a Taylor like theorem, though you find a section on Jet spaces (which is a more fancy way of talking about Taylor like expansions) 2. Bastiani calculus as used in most writings on infinite-dimensional Lie theory, see e.g. Section 1 of 2 for an overview and more references. In Bastiani calculus I am certain that there is a version of Taylors theorem. I give you a cartoon version since it is technical and long and I do not want to type endlessly:

On to the bad news: I am certain that it exists because I have a nice pdf in front of me stating the theorem together with all the nitty gritty details and how to prove it. The unfortunate part is that I am not at liberty to share it since this is part of the book manuscript for the forthcoming* book by Glöckner and Neeb on infinite-dimensional Lie theory. This is unfortunately also the only source I know of, where one can find it in this form. You could try to write an email to Glöckner (see 2) and see whether he can either point you towards an older source or wants to share the pdf.

*: Unfortunately, the book was forthcoming from 2005 on. I have seen many revisions but it is anybodys guess when it will finally appear in public.