Interpretation of the action in classical mechanics

In classical mechanics the dynamics on a manifold $M$ are characterised by the minimisation of a functional $$ \min_{q \in C^\infty(\mathbb{R},M)} \int_{\mathbb{R}}L(q(t),\dot{q}(t))dt, $$ where $L:TM\to\mathbb{R}$ is a smooth function, the "Lagrange function". In the case of a particle of mass $m$ constrained to a submanifold $M\subseteq \mathbb{R^n}$ moving in a potential $V: M \to \mathbb{R}$ the Lagrangian is given by $L(x,v):=\frac{1}{2}m\|v\|^2 - V(x),$ so the functional to minimise (the "action") is $$ C^\infty(\mathbb{R},M)\ni q \mapsto\int_{\mathbb{R}}\left( \frac{1}{2}m\|\dot{q}(t)\|^2 - V(q(t)) \right)dt \in \mathbb{R}.$$ This is all standard in physics and many "derivations" of this from variants of Newton's second law on $M$ are given in the physics literature. What I've never seen attempted is an explanation of this: What is the intuition behind formulating the dynamics in terms of a variational principle? Are there any heuristics on the interpretation of the action?

It seems that the action is some sort of "currency": Every path in $M$ comes at a cost and nature somehow chooses that path that costs the least amount. But how to interpret this amount? Why should the currency take the form:

EDIT 1: I'm not looking for a "historical explanation" on how this principle was discovered. I'm more looking for a direct interpretation of the action if this makes sense.

EDIT 2: As pointed out by arsmath the dynamics needn't be characterised by a minimum of the action, it can also happen that merely the derivative of the action vanishes and we have a stationary point (or a maximum!).

It's not the case that the action is always minimized in physics -- the result is purely that it's a stationary point of the action. This has come up several times at Physics Stack Exchange:

This raises the question of "Why a stationary point?", which Carlo's answer explains, but the examples above undermine the "currency" implication.

Even though the historical order is the other way around, it is helpful to start from wave/quantum mechanics and arrive at classical mechanics in the limit that the wave length of the particle goes to zero. Mathematically, that limit is the stationary phase approximation, meaning that classical trajectories are perpendicular to surfaces of constant phase. The phase is the action = integral of Lagrangian $L$, as first realized by Dirac, and as follows immediately by calculating the phase $\phi$ accumulated in a time $T$, $$\phi=\int_0^T(p\dot{q}-H)\,dt=\int_0^T L(q,\dot{q})\,dt.$$ From this equation you see that the Lagrangian is "kinetic minus potential energy" because it is the difference of $p\dot{q}$ = twice the kinetic energy and the sum of kinetic and potential energy (the Hamiltonian $H$). In this way stationary phase amounts to stationarity of the action.

While the following may be less “physically” intuitive than the question intends, I liked it when I heard it. If you believe in the importance of Poisson brackets, it is natural to ask if they make the Lie algebra of some transformation group, or in other words, if they can be realized as Lie brackets of vector fields.

Now paths $t\mapsto x$ in $X$ “lift” to paths in $L$ where $z$ spins around the “internal clock” $\mathbf U(1)$ so eloquently described in Feynman’s QED, evolving with $S=\int\ell\,dt$. “Wave functions” live in the complex plane it spans, and constructive interference of the waves corresponds to stationary $S$.

Added: At a more classical level, I can only recommend reading the 18-page Introduction of Souriau (1997, French version) where he explains from first Newtonian (or really D’Alembert) principles, not the Poincaré-Cartan 1-form $p\,dq - H\,dt=(p\dot q-H)dt=\ell\,dt$ but the Lagrange 2-form $dp\wedge dq - dH\wedge dt$ and generalizations which are (he argues) the only intrinsic objects worth talking about at non-quantum level. At (12.98) he explains why he abandoned the variational approach of a previous book — just as Lagrange also did 200 years earlier. Worth pondering?

The Principle of least action is an equivalent way to encode the dynamics of a Lagrangian or Hamiltonian system.

Note that the terminology "principle of least action" is a bit unfortunate.

In a way, the action is really best understood in a quantum-theoretical context, where it naturally emerges from Feynman's principle: essentially, one evaluates matrix elements of the time evolution operator $U(t',t)={\rm e}^{-i\hat{H}(t'-t)}$ with $\hat{H}=T(\hat{p})+V(\hat{q})$ by applying the Lie-Trotter formula, inserting complete sets of eigenstates of $\hat{q}$ and $\hat{p}$, and integrating over the eigenvalues of $\hat{p}$, which leaves one with a time-discretized path integral containing (a discretization of) $\int L(q,\dot{q})\,{\rm d} t$, and in the limit one obtains the usual Feynman path integral involving the action.

EDIT: True we start from a minimising principle (geodesic) to obtain another minimizing principle (with the Lagragian), however the first one is somehow more fundamental than the second one.

If you're interested in quantum-mechanical motivations/generalizations of results in classical mechanics, we can give one in particular for the given action. The transition probability amplitude between two states over time is proportional to $\exp\frac{i\delta S}{\hbar}$, where $S$ turns out to be the usual action. In particular, the exponent is a definite integral; the interval of time over which we integrate $L$ to give $S$ is the initial-to-final-state time period. We call this $S$ a path integral. Verifying $L=\frac12m\dot{x}^2-V(x)$ is a fairly involved calculation, explored at the linked section. The article as a whole shows the path integral formulation is equivalent to the Schrödinger equation; the $SE\implies PI$ part gives the form of $L$.

In quantum field theory, more general path integrals arise, but they too give rise to Euler-Lagrange equations. The reason is that if each transition has an amplitude $\propto\exp\frac{i\delta S}{\hbar}$, interference between $\delta S\ne0$ states is destructive, which is why we observe $\delta S=0$ states. (Note this is a motivation for stationary actions, not minimized ones.) This is related to $\int_{\Bbb R}\exp ikxdx=2\pi\delta(k)$.

(While this is my first answer here, I have been active on physics.stackexchange for multiple years, specifically in the subject of classical mechanics.)


The action is purely a mathematical instrument. 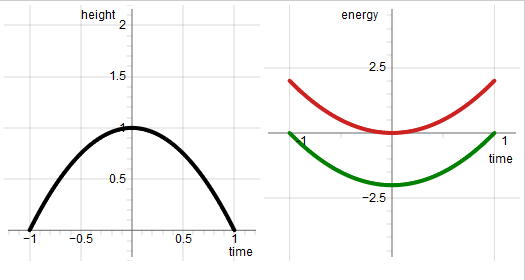 When you sweep out a range of trial trajectories the curves of the energies change accordingly.

The image displays the point in variation space where the trial trajectory hits the true trajectory: then the red curve (kinetic energy) and the green curve (minus potential energy) are parallel to each other. (They're parallel of course since the rate at which the kinetic energy is changing must match the rate at which the potential energy is changing.)

So: what you need is a method to know where the slopes of the red/green curves are not equal, and where they are. 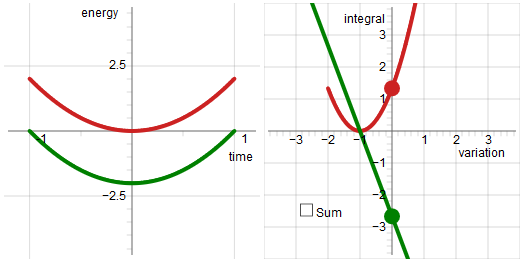 Emphasizing a key point:
The purpose of the integration is to obtain information about the slope of the potential/kinetic energy curve of the trial trajectory. Slope information is usually obtained with differentation, but in this case with integration.


This particular example is the simplest case: a potential that increases linear with height. The reasoning generalizes to all cases.

Below is an animated GIF, showing how the curves representing the energies respond to variation of the trial trajectory. The slider changes the variational parameter.

(The images illustrating this answer are my own work, they're screenshots of diagrams from my own website. )