Thru every point on the boundary of $C$, an area bisector can be drawn (for a description of their properties, please see 'Mathematical Omnibus' by Fuchs and Tabachnikov, Lecture 11). But it can be seen that a convex planar region can have just a single fair bisector (eg. for a thin isosceles triangle, the only fair bisector is the bisector of its apex angle) or a finite number of them (in which case, their number is necessarily odd as can be seen from simple continuity arguments; see reference at the top) or infinitely many.

Observations: For regions with a center of symmetry such as a circular disk or ellipse or regular polygon with even number of sides, all fair bisectors are concurrent. But, numerically, we see that for a general convex region $C$ with finitely many fair bisectors, the fair bisectors are not necessarily concurrent but usually very close to being so. Clearly,for a general $C$ with exactly 3 fair bisectors, they determine a small triangular region deep in the interior of $C$. For $C$s with more fair bisectors, their many possible intersections will divide the interior of $C$ into many regions. Let us refer to the union of those regions which do not share the outer boundary of $C$ as the 'core' of $C$. The core must lie deep inside $C$.

This is not an answer, and not even that helpful, but I wanted to see the central pattern formed by the collection of perimeter bisectors. 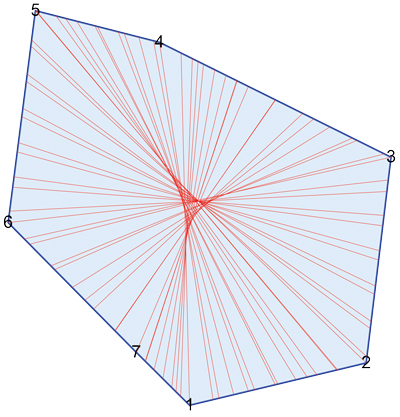 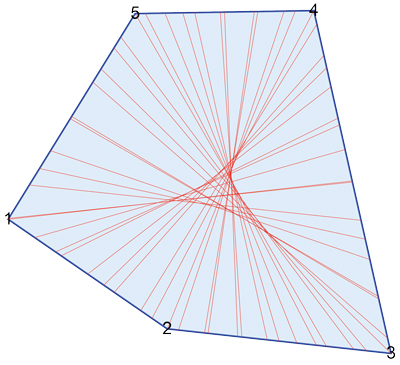 An answer to the question 2 (written with K Sheshadri)

The guess made above that needs to be proved: For a general convex polygonal region with no symmetries, for every orientation, we have a unique line with that orientation that separates out the same fraction of both area and outer boundary length. The value of this common fraction of area and perimeter separated out will vary continuously with orientation.

Proof : Consider the convex polygonal region $C$ and a given orientation (direction). Draw both tangents to $C$ in that orientation. We assume both these tangents to touch $C$ at a single vertex (coincidences of tangents with entire edges of $C$ can be dealt with by small perturbations). Let these parallel tangents be distance $D$ apart. By sliding a line coincident with one of the tangents perpendicular to itself until it coincides with the other tangent to $C$, we get a continuous range of cutting lines. Let these cutting lines be parametrized by $d$, the perpendicular distance from the tangent from which we began sliding the cutting line.

On the other hand, Pf has a linear behaviour throughout including at ends. This graph is a continuous polyline and also rises monotonically.

From the above observations, as $d$ is increased from 0, the Af curve (quadratic) begins lower than Pf (linear) curve and as $d$ tends to $D$, Af approaches 1 from above the Pf curve. This plus the monotonically rising nature of both graphs plus their start values both being 0 and end values both being 1 guarantee that they have to necessarily intersect at some intermediate value of $d$; at these intersections, obviously, Af = Pf. It appears that convexity of $C$ also guarantees there will be only one such intersection.

Thus we have, for every orientation, a value of $d$ for which Af and Pf have same value - as claimed. If $C$ is centrally symmetric (circle, ellipse, rectangle, regular polygon with even number of sides...), the only such value of $d$ is $D$/2 and the common value of the fractions is 1/2 for all orientations. This will not be the case for asymmetric convex polygonal $C$'s - we have different common Af and Pf values for different orientations. This fraction should change continuously with orientation.

We guess that the envelope etc. of the cutting lines with common Af and Pf for each orientation might have interesting properties.

Not the answer you're looking for? Browse other questions tagged discrete-geometry convex-geometry plane-geometry or ask your own question.

1
On comparing planar convex regions of equal perimeter and area
3
On some centers of convex regions based on partitions
2
Cutting convex regions into equal diameter and equal least width pieces - 2
6
On planar sections of 3D convex bodies
5
On intersections of several convex regions
3
Least area and least perimeter triangles that contain a convex planar region - how different can they be?
Question feed