How many numbers $\le x$ can be factorized into three numbers which form the sides of a triangle?

Note: Posting in MO since it was unanswered in MSE

The first few numbers in this sequence are

I am interested in the density of these numbers. In the linked questions users commented that the almost all integers are expected this property since because most numbers will have a several small prime factors so the natural density was initially thought to be $1$.

However, quite counter intuitively, in one of the long comment which was posted as an answer in the linked question, it was proved that if $n$ has triangular divisors then the largest prime factor of $n$ is less than $\sqrt n$ which immediately implies that the natural density of numbers with triangular divisors is $ < 1 - \log 2 \approx 0.3069$. Experimentally, the data shows that the natural density approaches $0$. Let $f(x)$ be the number of integers $\le x$ with triangular divisors. We have $$ f(46732002) = 3630678 $$ The graph of $\frac{f(x)}{x}$ vs $x$ given below shows that the density decreases as $x$ increases.

A simple curve fitting gives $\frac{a}{\log x}$ as a good fit with $R^2 = 0.9977$ which suggests that $f(x)$ growth rate somewhere close to a constant times the prime counting function $\pi(x)$. This is rather counter intuitive as mentioned in the comments that we expect almost all integers to have this property. 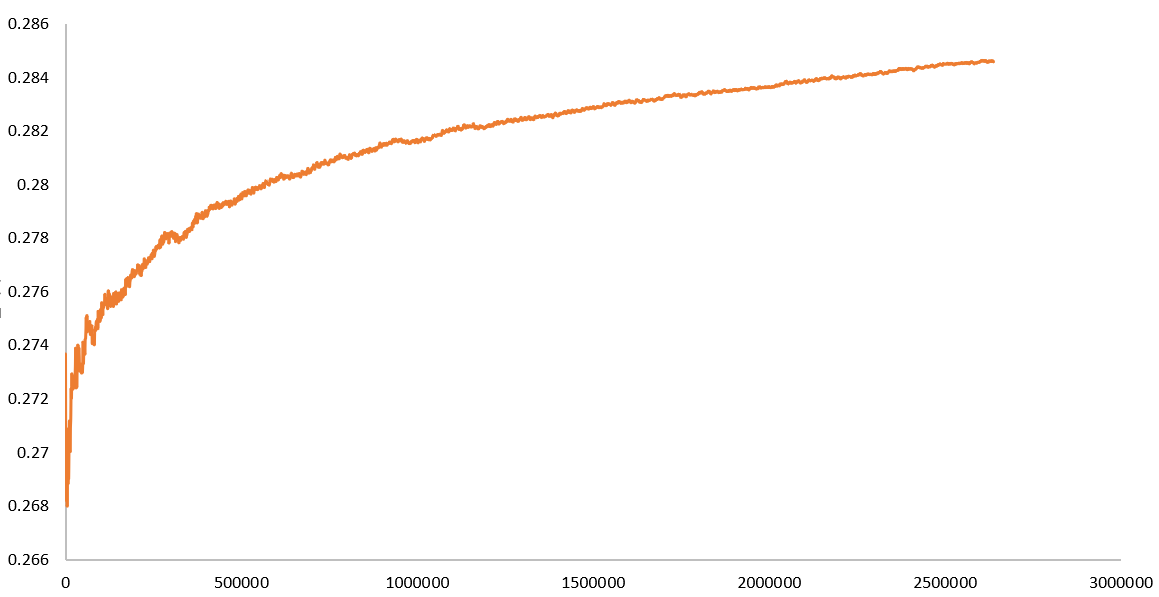 Question: How many numbers $\le x$ have triangular divisors and why are even numbers more dense than odd numbers?

This problem is related to the higher dimensional multiplication table problem (specifically, the three dimensional version). From the work of Tenenbaum, Ford, and Koukoulopoulos this is now well understood in many cases. From their work, one can show that the number of $n$ up to $x$ with triangular divisors is $$ \ll \frac{x}{(\log x)^{\alpha}}(\log \log x)^{\frac 12} $$ where $$ \alpha=1- \frac{2}{\log 3} +\frac{2}{\log 3} \log \frac{2}{\log 3} = 0.27016\ldots. $$ The power of $\log \log x$, which is the thrust of the work of Ford and Koukoulopoulos, is probably not correct here. But there should be a corresponding lower bound of size $x/(\log x)^{\alpha +o(1)}$; it should be possible to establish this from the techniques in Koukoulopoulos.

5
Is every integer $\ge 312$ the sum of two integers with triangular divisors?

3
Does the function which sends a right angled triangle to its area produce infinitely many numbers having hardly any prime factors?
6
Number of divisors of an integer of form 4n+1 and 4n+3
10
Representations by positive definite binary quadratic forms
0
Can the order of a rational number in Z/pZ be as large as we want
5
Goldbach's conjecture and Euler's idoneal numbers
3
Unknown bias in a distribution related to prime numbers
5
Is every integer $\ge 312$ the sum of two integers with triangular divisors?
8
Why is there an unexpected increase in the density of certain types of Goldbach primes?
Question feed