For a 2D closed convex shape, with metric $d$ and fixed area $A$, we can calculate the average distance between random (interior) points. For different shapes, we will get different values for this average. We can ask, for which shape is this average a minimum (in terms of $A$). For the Euclidean metric, the answer is the circle. If we pick a different metric, what shape do we get?

Here is an answer for lattice points and using the $L_1$ (Manhattan) metric: 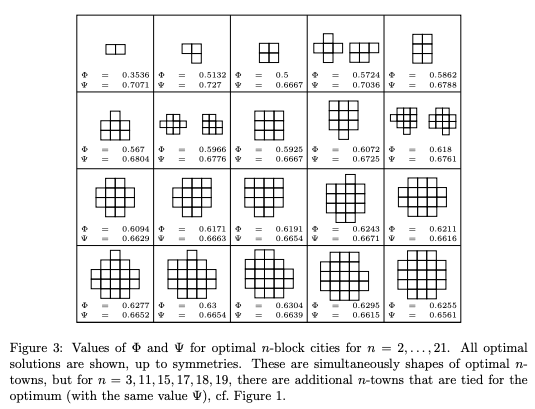 The continuous version of the same problem is addressed in this paper:

From the Abstract: "In this paper a nonlinear differential equation for the boundary curve of such a city is determined." 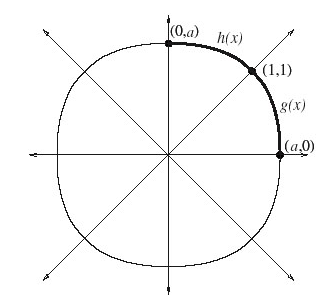 For an arbitrary metric and measure, this is going to be a very difficult question to answer. The shape of the minimizer will depend on the choice of metric and measure, if it exists at all. Joseph O'Rourke discussed the $L^1$ distance already, so I'm going to focus on distance functions which are either symmetric, or else induced by a smooth Riemannian metric. These sorts of questions are known as extremal problems [1] and are closely related to isoperimetric inequalities, which are an active area of research.

As noted in the comments, we need to specify which measure we use to compute averages. It appears that there are at least two natural choices of measure.

As I mentioned earlier, the particular shape of the minimizer will depend on the choice of distance function and measure. However, from a variational standpoint, there is a fairly general principle which is very helpful.

A convex region $S$ is a critical point for the average distance between interior points iff the integral $\int_S d(p,x) \, d \mu(x)$ is constant for all $p \in \partial S$. Here, $\mu$ is the measure used to determine averages.

From this, there are a few immediate consequences.

For more general (non-symmetric) Riemannian metrics (with their induced distance function and measure), this question is much more difficult, and the variational principles are less useful. However, with a lower bound on the sectional curvature, it is possible to get a lower bound on the areas of geodesic balls. Using this, it should be possible to establish uniform lower bound on the average distance between points in a region of area $A$. However, these sorts of estimates don't tell you what the minimizer looks like (or even if it exists at all). It is possible to construct distance functions where no minimizer exists, by incorporating patches where the curvature is more and more negative.

Not the answer you're looking for? Browse other questions tagged pr.probability mg.metric-geometry or ask your own question.

1
Determining the maximum number of distance relationships that can be defined between points in Euclidean space
31
Tiling of the plane with manholes
11
A metric space of geometric shapes
20
“a shape that … lies halfway between a square and a circle”
5
Pigeonholing Polygons: Can two rigid regions fit in twice the space needed?
7
Maximum average Euclidean distance between $n$ points in $[-1,1]^n$
30
Gromov-Hausdorff distance between a disk and a circle
Question feed