Cauchy residue theorem tells us that for a function $$f(z) = \sum_{k \in \mathbb{Z}} a(k) z^k,$$ the coefficient $a(k)$ can be extracted by an integral formula $$a(k) = \frac{1}{2\pi i}\oint f(z) z^{-k-1},$$ with a contour around zero. Now, there is nothing to prevent us from thinking of $a\colon \mathbb{Z} \to \mathbb{C}$ as a function over the complex domain, defined by the above integral. In this way, we have naturally "continued" the function $a(k)$ over the integers to one over the complex numbers. Is there any meaning to this beyond just something amusing?

For example, consider $f(z)=\exp(z)$. In this case, $a(k)=1/k!$ which one would think would be continued to $1/\Gamma(1+k)$. But at least if you attempt to plot what happens above, this is not the case. We get a function with Bessel-like oscillations (blue) which nevertheless coincides with $1/\Gamma(1+k)$ (orange) on integral points! 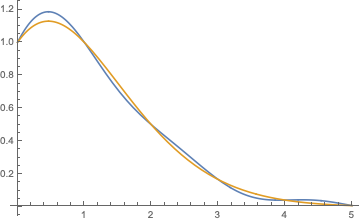 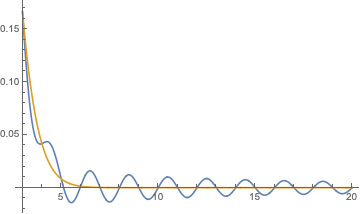 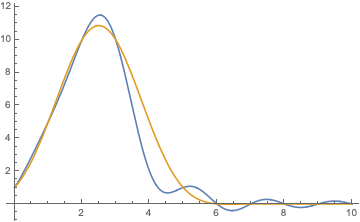 Any explanation (or references in the literature) for what is going on here?

This is also related to Ramanujan's master theorem, which expresses this analytic continuation as a Mellin transform. Hardy gave some conditions under which this identity can be made rigorous.

Not the answer you're looking for? Browse other questions tagged real-analysis power-series analytic-continuation or ask your own question.

40
What does Mellin inversion “really mean”?