I am interested to know if a similar theorem that shows this answer of the post Estimating the size of solutions of a diophantine equation (this MathOverflow, January 5th 2016) is feasible for a different diophantine problem.

Question. I would like to know if the reasonings in the answers of the linked post also works for the diophantine equation in previous conjecture. Is it possible to prove previous conjecture, or is there any counterexample? Many thanks.

I don't know if this equation is in the literature (as reference I've added the mentioned post and [1]) as a special case of the expression $$\frac{\lambda a}{\beta b+\eta c}+\frac{\lambda b}{\beta c+\eta a}+\frac{\lambda c}{\beta a+\eta b}=N$$ with $N$ a non-zero integer, and for given integers $1\leq \lambda\leq \beta\leq \eta$. Our case, is similar than the linked post with $(\lambda,\beta,\eta)=(1,2,3)$. Our curve can be written (I did the calculation using Wolfram Alpha online calculator)

I think that this is a good companion of previous post, but if it is in the literature feel free to comment or provide your answer as a reference request and I search and read the statement about previous Conjecture from the literature.

The conjecture is false, and in fact there exists a positive integer solution for $$\frac{a}{2b+3c}+\frac{b}{2c+3a}+\frac{c}{2a+3b}=5,$$ though I was unable to find it explicitly. I will explain how to prove it, though I remark that my method is no different that the one of Bremner and MacLeod.

$F$ is the (homogeneous) cubic polynomial whose roots are the solutions to the equation above, which we treat as a projective curve, and $O$ is an obvious point on this cubic (note that it corresponds to one of the denominators vanishing, so doesn't give a solution to the original equation). $E$ is an elliptic curve in the Weierstrass form resulting from transforming $F$ and $O$, and $f$ is an algebraic isomorphism from $F$ to $E$. $finv$ is the inverse of $f$. Whatever $f$ and $f^{-1}$ are, they give a bijection between rational points on the two curves.

$\newcommand{\Q}{\mathbb Q}$Our goal is to prove that there is a point $P_0\in E(\Q)$ such that the coefficients of $f^{-1}(E)$ are positive. To generate many points in $E(\Q)$, we first have to find some, which is done in SageMath using the command

which returns some points of infinite order in $E(\Q)$ (contrary to the name of the command, the points are not necessarily guaranteed to generate the entire group). In this case, it returns the following pair of points:

(if you wish to repeat this computation, be warned it took over 10 minutes.) Let $P$ be the first of those points. The crucial thing about this point can be seen when we make a plot: 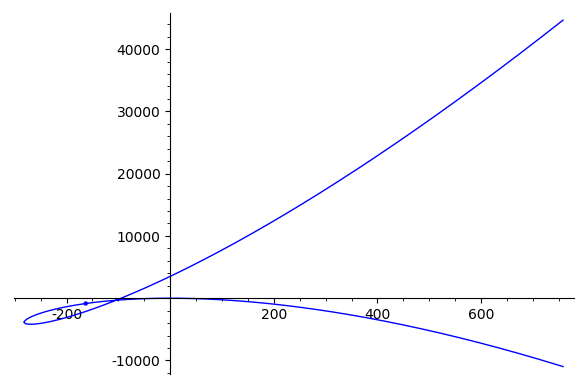 We see that $P$ lies on the egg of $E$, the bounded connected component of $E(\mathbb R)$ (it is impossible to see in the picture, but the "self-crossing" of $E$ is actually a place where $E$ splits into two components). It is classical that for $E$ like this, with disconnected set of real points, we have $$E(\mathbb R)\cong(\mathbb R/\mathbb Z)\times\mathbb Z/2\mathbb Z$$ as a group, and a point $P$ lying on the egg corresponds to a point $(\alpha,1)$ for some irrational $\alpha$. For this reason we see that the subgroup of $E(\Q)$ generated by $P$ is dense in $E(\mathbb R)$.

Now we make our final observation: our original equation has a real positive solution, so points of $E(\mathbb R)$ corresponding to solutions with coefficients of the same sign form a nonempty open subset. Therefore some multiple $kP$ of $P$ belongs to this open subset, and the point $f^{-1}(kP)\in F(\Q)$ will have positive coordinates (or, all negative, but then we can just flip the signs). Clearing the denominators we find an integral solution to $F=0$.

To find an actual solution we can try computing $kP$ until $f^{-1}(kP)$ has positive coordinates, which the following code does:

Unfortunately, running this for a while I found no hits. The region of positive solutions is rather small (compare with the figures in Bremner-MacLeod; I didn't compute how small they are here) so the least such $k$ could be quite large. I think $k$ got to around $200$ before I killed the program, which heuristically means that the least solution we get this way will have on the order of $10000$ digits, though I make no claims that this is the smallest possible solution (we can probably do much better by taking linear combinations of $P$ and the second point given by E.gens(), but I didn't bother to check those).

This resolves the case $n=5$. For $n=1,3$ none of the generated points (one for $n=1$, two for $n=3$) lie on the egg, so the method does not guarantee existence of solutions. However, it doesn't exclude them either: for one, E.gens() does not guarantee we have generators of $E(\Q)$, and further I do not know if the positivity region lies entirely within the egg. Both problems are surmountable though: I believe Sage has a method to compute generators with certainty, and we can check whether the positivity region lies on the egg by plotting points of (the affine part of) $F$. I have made no attempts to try larger values of $n$, but feel free to play around with the code yourself.

The problem of this question is qualitatively and quantitatively different in some ways from that considered by Andrew Bremner and myself.

Not the answer you're looking for? Browse other questions tagged nt.number-theory reference-request elliptic-curves diophantine-equations rational-points or ask your own question.

155
Estimating the size of solutions of a diophantine equation