Examples of incorrect arguments being fertilizer for good mathematics? [duplicate]

I'm looking for explicit examples of this phenomenon in mathematics.

Of course, most proof ideas start out vague and eventually crystallize. So I think the more incorrect/vague the original argument or idea, and the more important the final fruit, the better, as long as there is still a pretty direct connection from the vague idea to the final fruit.

Note: Many "paradoxes" sort-of are like this, but I think aren't what I'm looking for. (William Byers's book "How Mathematicians Think" has several examples and lots of discussion of the important role of paradox in mathematical research.) For example, the relationship between Russell's paradox, Godel's Incompleteness Theorem, and the undecidability of the halting problem (Church; Turing). But I think, unless the paradox has some other aspects of the vague-idea-as-fertilizer phenomenon, that I'm not looking for examples of paradoxes, though I am willing to be convinced otherwise.

Edit: It's been suggested that this a duplicate of this other question, but I really think it is not. I am more interested in examples of outright incorrect (or nearly so) original statements that nonetheless lead to fruitful mathematics, whereas the other question seems to essentially be asking about ideas that start out intuitive, non-rigorous, or ill-defined and then are turned into rigorous arguments but along the same intuitive lines. (And, as I said above, I think I agree with one of the answers there that that is simply much of mathematics.) By comparing the answers to the other question to the three great answers already on this question (knot theory rising because Kelvin thought atoms were knotted strings; Lame's erroneous proof of FLT leading Kummer to develop algebraic integers; Lebesgue's incorrect proof that projections of Borel sets are Borel leading to Suslin's development of analytic sets), one can get a sense of the difference.

In 1905 Lebesgue "proved" an incorrect fact that a projection of a planar Borel set onto a line is Borel. Then years later Suslin found a mistake in Lebesgue's paper and he constructed a Borel set whose projection is not Borel. This led to the important theory of Suslin sets, aka analytic sets, that are projections of Borel sets. Such sets are not necessarily Borel, but they are Lebesgue measurable.

Kummer developed the theory of algebraic integers in an attempt to save a flawed proof of Fermat's last theorem by Lamé, as explained here: 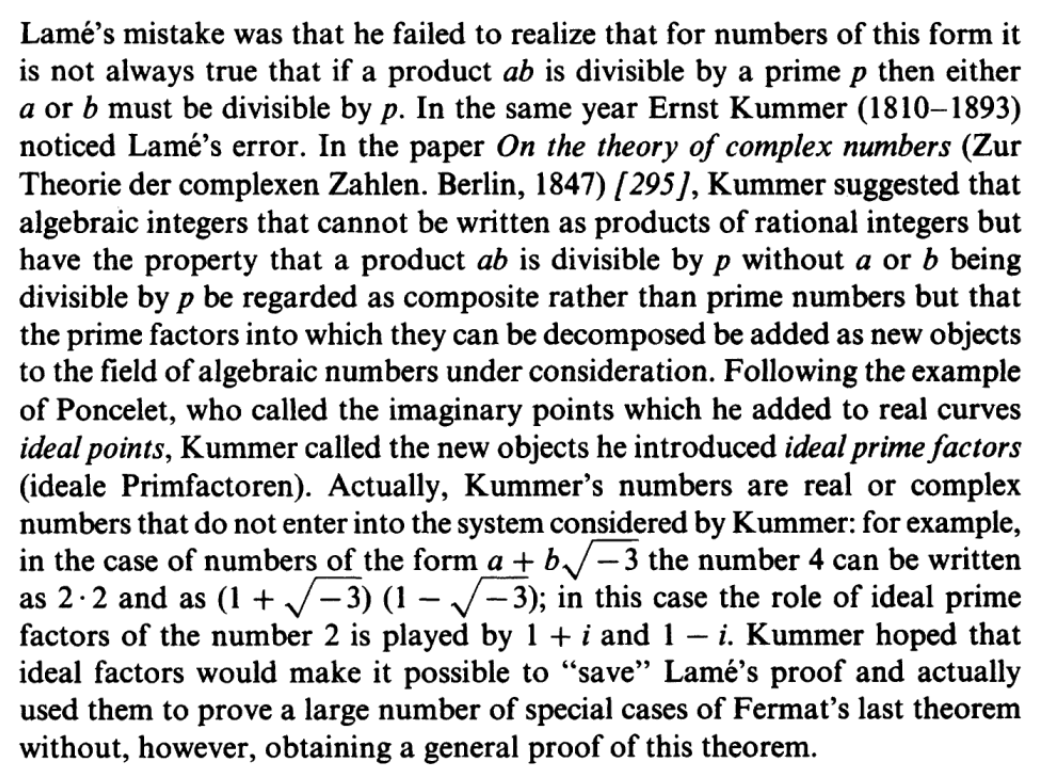 The field of knot theory became much more (legitimate ?) actively researched area in math because the physicists (i.e., Lord Kelvin) thought that atoms were knots in aether. Of course that idea is now proven `BS'. From AMS.org (http://www.ams.org/publicoutreach/feature-column/fcarc-knots-dna):

The study of knots began in earnest in the 1860's when William Thompson (Lord Kelvin) proposed his vortex model of the atom. Simply said, this theory postulated that atoms were formed by knots in the ether and that different chemical elements were formed by different knots.

Obviously König's theorem should appear on this page. König suggested a proof by which the real numbers cannot be well-ordered. Unfortunately, he misunderstood some of the work he relied on, and thence we have this wonderful theorem known as König's theorem or Zermelo–König's theorem:

Another example: S. Smale wrote a paper with a conjecture that rules out the phenomenon of chaos in dynamical systems (i.e., claiming that chaos does not exist in dynamical systems at all). But a counterexample from a colleague led him to actually discover the `horseshoe', an important geometrical object which is now understood to be the hallmark of chaos, and has led to much greater understanding of chaotic phenomena.

The whole story is here, by Smale himself: 'Finding a horseshoe on the beaches of Rio': http://www.cityu.edu.hk/ma/doc/people/smales/pap107.pdf

201
Most interesting mathematics mistake?
33
Non-rigorous reasoning in rigorous mathematics
94
Mistakes in mathematics, false illusions about conjectures
37
The error in Petrovski and Landis' proof of the 16th Hilbert problem

110
Quick proofs of hard theorems
43
Examples of undergraduate mathematics separation from what mathematicians should know
7
Gelfand representation and functional calculus applications beyond Functional Analysis
37
Can one make high-level proofs about chess positions?
77
Has incorrect notation ever led to a mistaken proof?
39
What are some examples of theorem requiring highly subtle hypothesis?
63
Small ideas that became big