Where this action comes from: The Kreweras walks of length $3n$ are in obvious bijection with the linear extensions of a poset $P$, namely, $P=[n] \times V$, the direct product of the chain on $n$ elements and the 3-element ``$V$'' poset with relations $A < B$, $A < C$. I became aware of this poset thanks to this MO answer of Ira Gessel to a previous question of mine, which cited this paper of Kreweras and Niederhausen in which the authors prove not just a product formula for the number of linear extension of $P$, but for the entire order polynomial of $P$. The rotation of Kreweras walks as I just defined it is nothing other than the famous (Schützenberger) promotion operation on linear extension of a poset (see this survey of Stanley's for background on promotion). There are few non-trivial classes of posets for which the behavior of promotion is understood (see section 4 of that survey of Stanley's), so it is very interesting to discover a new example. In particular, all known examples are connected to tableaux and symmetric functions, etc.; whereas this Kreweras walks example has quite a different flavor.

Some thoughts: The analogous rotation action on words with only $A$'s and $B$'s (i.e., Dyck words) is well-studied; as explained in section 8 of this survey of Sagan's on the cyclic sieving phenomenon, it corresponds to promotion on $[2]\times[n]$, and in turn to rotation of noncrossing matchings of $[2n]$. There is a way to view a Kreweras walk as a pair of noncrossing partial matchings on $[3n]$ (basically we form the matching corresponding to the $A$'s and $C$'s, and to the $A$'s and $B$'s). But this visualization does not seem to illuminate anything about the rotation action (in particular, when we rotate a walk, one of the noncrossing partial matchings simply rotates, but something complicated happens to the other one).

As mentioned earlier, there is a bijection due to Bernardi between Kreweras walks and decorated cubic maps, but I am not able to see any simple way that this bijection interacts with rotation.

In spite of these observations, the lack of any connection to algebra (e.g., the representation theory of Lie algebras), and the lack of any good "model" for these words, makes it really hard to reason about how they behave under rotation.

Martin Rubey and I solved my conjecture.

The basic idea of the proof is as follows. First to a Kreweras word $w$ we associate what we call its bump diagram, which is just the union of the two noncrossing partial matchings of $\{1,2,...,3n\}$ associated to $w$ (the one for the A's and B's and the one for the A's and C's), drawn as a graph in the obvious way. For example, with $w=AABBCACCB$ its bump diagram is 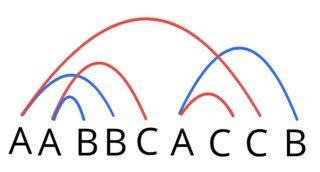 Indeed, this always happens (that the trip permutation is the same as the permutation from the cylindrical rotation array). It follows from the main lemma behind the overall proof, which is

As a remark, these trip permutations come from the theory of plabic graph (cf. Section 13 of Postnikov's paper https://arxiv.org/abs/math/0609764).

The above lemmas easily imply that the $3n$th rotation of $w$ is obtained from $w$ by swapping B's and C's.

Martin and I will post a preprint to the arXiv with all the details soon.

This is not an answer, but too long for a comment.

This promotion operator is (apparently) governed by local rules, similar to https://arxiv.org/abs/1804.06736, as follows:

Possibly we can get a proof that the occurrences of $\tilde\mu$ with a negative coordinate yield a permutation, assuming that the local rules are correct.

(This array does not satisfy the local rules along the diagonal.)

Now we consider one square of four, but instead of its corners label the four edges with $\lambda-\kappa$, $\nu-\lambda$, $\mu-\kappa$ and $\nu-\mu$. There are 11 different squares occurring, two of which correspond to a $b$ or $c$ respectively. For these two, the labels on parallel edges are different, for the others, they are same. Put a bullet in the squares whose parallel edges have distinct labels.

I believe this follows from the local rules.

Again not (quite) an answer, but too long for a comment:

Here is another way to obtain the (conjectural) permutation.

The algorithm to obtain the permutation can be reformulated as follows:

Although this looks much more complicated, it might be easier to prove that this algorithm works: we "only" have to show that there is a matching from closers to openers such that each closer is matched to a smaller opener with the correct label.

It remains to show that promotion of the path intertwines with rotation of this permutation (regarded as a chord diagram).

Not the answer you're looking for? Browse other questions tagged co.combinatorics ds.dynamical-systems posets or ask your own question.

11
How exactly does Schützenberger promotion relate to Striker-Williams promotion?
4
Bijection between noncrossing matchings on $2b$ points and Standard Young Tableaux of size $2 \times b$
1
Number of edge-invariant walks in complete graph
11
Order polynomial of shifted double staircase
10
Closed walks on an $n$-cube and alternating permutations
1
Number of walks on a graph passing through a specific vertex
Question feed