Given a finite set of convex $d$-dimensional polytopes $\mathcal P$, for some $d\ge 2$.

Question: Is it true that there are only finitely many different convex $(d+1)$-dimensional polytopes whose facets are solely (scaled and rotated versions of) polytopes in $\mathcal P$?

A face of a polytope is the intersection of the polytope with a touching hyperplane, so subdividing facets does not count here.

In general, two $(d+1)$-polytopes shall be considered as different if they differ not just in scale and orientation. By the usual rigidity arguments, given the shape of facets and their connections, the metric of the polytope is uniquely determined. Hence, if we can built different polytopes, they will be combinatorially different as well.

There are only finitely many polyhedra that can be built from any finite set of regular polygons, but as far as I know, this result is by enumeration (see, e.g. Johnson solids).

I think this is indeed true. This should follow from the rigidity of convex spherical polytopes and a few more lemmas. I'll explain how to deal with cases $d\ge 3$.

Lemma 3, gap. Suppose we have a spherical convex polytope in $S^n$ of diameter less than $\pi-\varepsilon$ then the volume of the dual polytope is bounded from below by $c(n,\varepsilon)>0$.

Lemma 4, sum of dual solid angles. Let $P$ be a convex $d+1$-polytope. For each of its vertices consider the dual cone. Then the sum of solid angles of such dual cones is equal to the volume of the round $\mathbb S^d$.

Suppose we have a $d+1$-polytope $P$ with faces homothetic to $P_1,\ldots P_k$. Then for each vertex of $P$ we get a convex spherical $d$-polytope whose faces are composed from $S_1,\ldots, S_m$. Note the the number of such spherical polytopes is finite up to isometry, by Lemmas 1 and 2. Moreover, all of them have diameter less than $\pi-\varepsilon$ for some $\varepsilon$ . So by Lemma 3 the volumes of spherical polytopes dual to those (coming from vertices) are at least $c(d,\varepsilon)$. Hence by Lemma 4 the total number of vertices of $P$ is at most $vol(S^d)/c(d,\varepsilon)$. Hence we have only finite number of combinatorial types of $P$.

In the case $d=2$ it is not possible if you exclude coplanar faces.

Now there are only finitely many ways to glue together at most $n$ shapes of $\mathcal P$, and each such way describes a unique polyhedron (if any) by Cauchy's theorem. Therefore the amount of polyhedra you can form using faces in $\mathcal P$ is finite.

I'm fairly certain it is possible to generalize this proof to other values of $d$.

Not an answer, but an "almost counterexample" for $d=2$ that came to my mind when I saw that question. Starting with a regular dodecahedron, we can successively insert circular "belts" of hexagons, in a way that the whole polyhedron is convex at each stage. The illustrations should give an idea. The shapes of the hexagonal facets can come very close to each other (in the appropriate sense), though it is clear that there can only be so many of a precise shape.

Perhaps you should add a condition to exclude coplanar facets, i.e., to insist upon strict convexity. Otherwise the deltahedra lead to an infinite number of combinatorially (but not geometrically) distinct polyhedra: 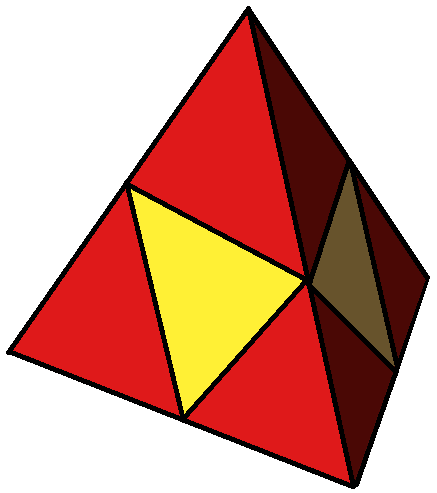 9
Can select many disjoint pairs with prescribed differences from Z_n?
8
Which (semi)regular polyhedra are combinations of two others?
11
Metric conditions on configurations of points with only finitely many solutions
8
The “Johnson polychora”
2
Several convex polytopes in a simplex; fix an extreme point for each; how many can be supported by a function monotonic on all line segments?
Question feed