This question was originally posed on math.SE but seems to require research-level mathematics expertise:

Two players play each other in a match of games of chess where the match winner is the first to achieve either $m>0$ total game wins or $0<n<m$ game wins in a row. (There are no ties.) How many distinct possible sequences of game results exist as a function of $n$ and $m$?

For small values, one can write out the sequences (as in the linked question).

Assume, without loss of generality, that the winning player is $A$ and the loser is $B$.

There are, then, two ranges of interest:

The number of ways this can be achieved is:

but again, this over counts in certain cases because it includes cases in which $A$ wins $n$ consecutive games.

The total number of ways this can be done is:

but note that some of these cases may have $A$ win $n$ in a row. We must subtract those cases.

Another way to view part of the problem

Perhaps we can view this problem as a path through a lattice graph. Consider the number of sequences in which $A$ wins the match by winning $m$ games (and not by winning $n$ in a row). Each game won by $A$ is a lattice step to the right and each game won by $B$ is a step upward. Let's assume $A$ will be the winner. Thus the terminal nodes are those on the right-most column of the graph, $m$ steps horizontally. 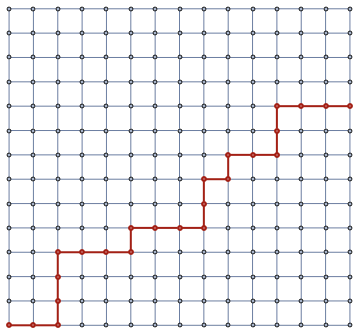 Counting this total number should give the number of sequences (paths) in which $A$ wins by reaching $m$ won games (but not having a streak of $n$).

Of course, this is not the full solution to the problem... but perhaps a casting that will help.

Not the answer you're looking for?Browse other questions tagged co.combinatorics or ask your own question.

14
Mathematical solution for a two-player single-suit trick taking game?
12
The Worst Possible Winner
3
Determinacy interchanging the roles of both players
2
Round-Robin Tournaments and Forests
8
Analysis of Misere Nim?
23
Sane bound on number of moves for Maker-Breaker game on $\mathbb R^2$ for $\{0,1,2,3,4\}$
19
The arithmetic progression game and its variations: can you find optimal play?
Question feed