Algorithm for reporting all triangles with unique interior point

What is known about the complexity of and/or practical algorithms for reporting all triplets of points from finite set of at least four points of which no three are collinear in the Euclidean plane, that define a triangle that contains exactly one point from the set in its interior, i.e. whose barycentric coordinates are strictly positive?

after further thinking about the problem, I tend to believe that $O(n^4)$ is the best time complexity possible.

Beating the $O(n^4)$ conjectured lower bound would require a sublinear-time algorithm for reporting all directed triangles in an oriented visibility graph of a star-shaped polygon, which doubt is possible.

elaborating on the partitioning idea that Joseph O'Rourke sketched in his comment and combining it with utilizing empty triangles $\Delta_{ABD}$ to identify candidate points $C$ that could define a triangle $\Delta_{ABC}$ with unique innr point $D$, one finds that all solid points outside the shaded empty triangle qualify: 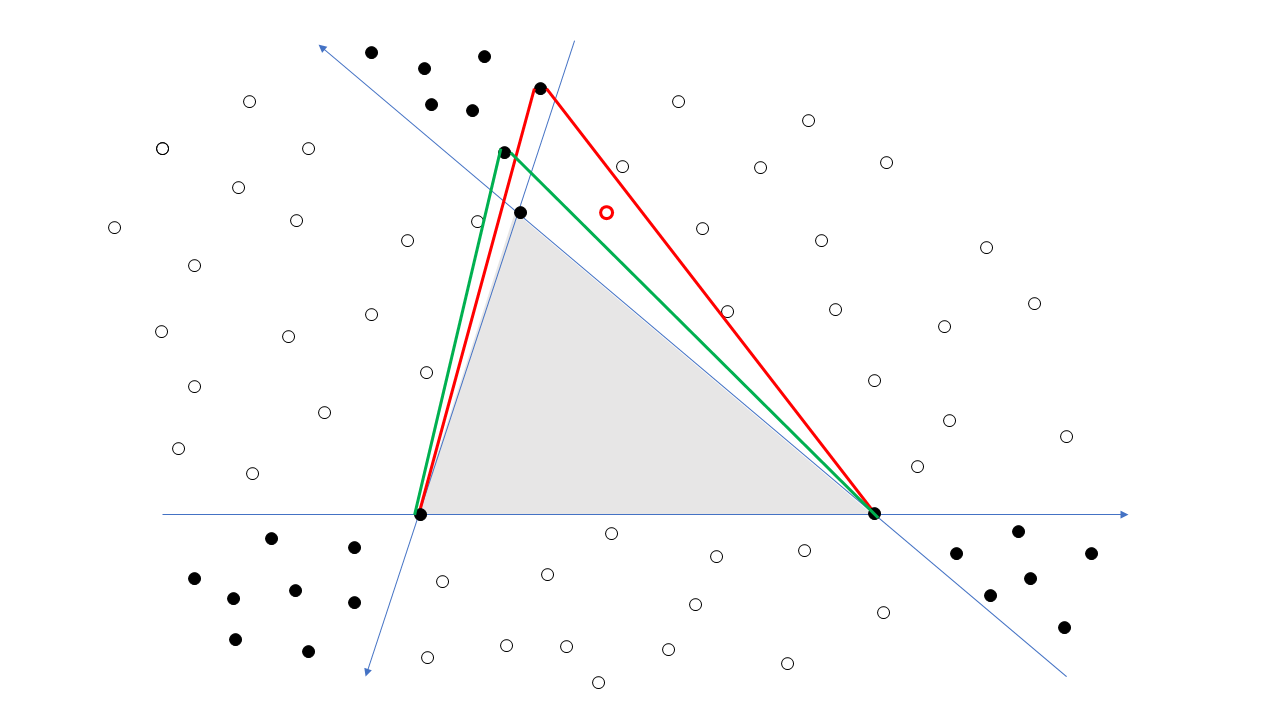 From the picture it can be clearly seen that the set of solid points contains all points that augment the shaded empty triangle to one with unique interior point.

If one arranges $n+1$ points as illustrated below, then there are $n^3/9 = \Omega(n^3)$ triangles each of which includes exactly one point in its interior. So no algorithm can beat $O(n^3)$ in the worst case. 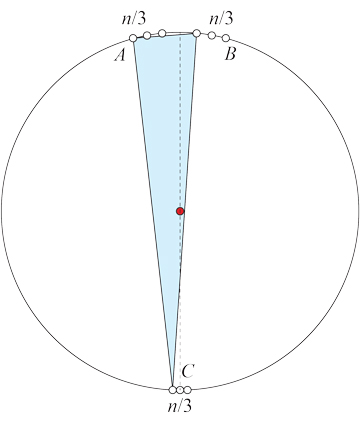 Triangles with corners in sets $A,B,C$ include the centerpoint.

Given any two points $p$ and $q$, consider the points above line $pq$. You want to list all points $r$ such that $pqr$ contains exactly one additional point. To do so, sort the points radially around $p$ and around $q$. For each $r$, the points that are contained by $pqr$ are the ones that are (strictly) later than $r$ in the $p$-order, and earlier than $r$ in the $q$-order. Or, if we use position in the two orderings as Cartesian coordinates (with tied points being given equal positions), it's the number of points in the quadrant below and to the left of $r$.

Repeating this for all $p$ and $q$ gives $O(n^3\log n)$. You can get rid of the logs on the frontier calculations by re-using the cyclic orderings around each point rather than separately computing them for each $(p,q)$ pair, and replace the binary searches by two merge computations on the two frontiers (one to find the left end of each range and another to find the right) to reduce this to $O(n^3)$. And, as you've already determined, the output size can be $\Omega(n^3)$.

Not the answer you're looking for? Browse other questions tagged mg.metric-geometry algorithms computational-geometry plane-geometry or ask your own question.

7
Intersection of 2 visibility polygons
6
Any reference to an algorithm for finding the largest empty circle on a sphere (with great-circle distance)?
2
The points of half area of a triangle
2
Calculating the “Belvedere Hull” of a Simple Planar Polygon
2
Algorithm for Finding all Empty Ellipses Locked by a Set of Points
2
Checking planar convexity of 4 points with Stewart's formula
4
Complexity of Determining the Edges of Planar Convex Hulls
11
Set of points with a unique closest point in a compact set
Question feed