A classic problem using an inductive construction is to show that the $2^n \times 2^n$-square, with a missing corner, can be tiled with L-triominoes. The proof goes like this:

It is true for $n=1$, so assume it holds for $n-1$. Now, the $2^n \times 2^n$-square is subdivided into four smaller squares. In the three sub-squares not missing a corner, consider instead the three corners in the middle, which form an L-triomino. These three can be covered with an L-triomino, and the remaining figure consists of 4 squares of size $2^{n-1}$, with a corner missing. These can now be tiled by induction. 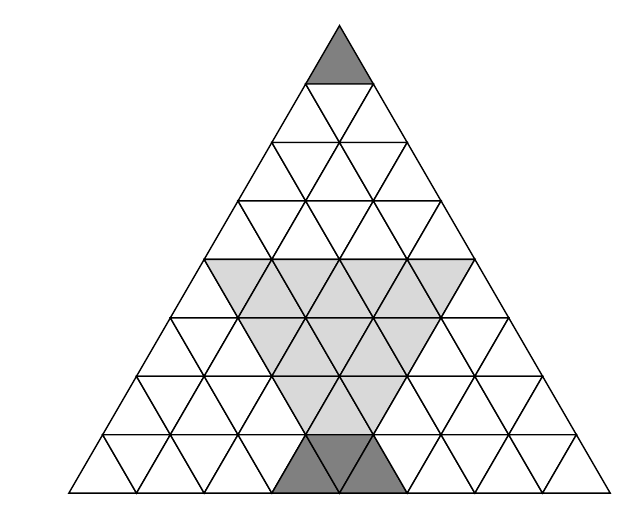 The question: I have struggled quite a lot to generalize these two problems, that is, find tiling problems in the same spirit. The essential parts in the two above examples are that both the square and the triangle are so called rep-tiles, and can be tiled with smaller copies of themselves.

A possible approach: Start with a rep-tile $R$, remove a small 'corner' $C$ and hope that in the rep-tiling of $mR$, ($m$ is magnification factor) then all but one 'corner' can be covered by a single figure of shape $R \setminus C$. Thus, $m^n R$ with a corner missing can always be tiled by tiles of shape $R\setminus C$, for all $n\geq 1$. However, this seem rather difficult.

Browse other questions tagged tiling induction or ask your own question.

12
Tiling by regular simplices
7
Does every polycube tiling imply a regular polycube tiling?
3
tiling a rectangle with squares: how unique are the minimal solutions?
32
Tiling the plane with incongruent isosceles triangles
2
How is the Penrose tiling decapod count of 62 calculated?
80
Can a row of five equilateral triangles tile a big equilateral triangle?
14
♢ ⧫ ⬠: the fourth kind of Penrose tiling?
9
Tiling with incommensurate triangles
12
Random Walk on Pentagonal Tiling
Question feed