I am implementing an algorithm to generate free unlabelled trees uniformly at random (uar). For this I found this paper by Herbert S. Wilf (The uniform selection of trees. 1981. In Journal of Algorithms). This paper defines the procedure Free which generates free unlabelled trees by calling one of two smaller procedures (either Bicenter or Forest) with a certain probability each. These two procedures, in turn, are based on the ranrut procedure, which generates rooted unlabelled trees uar. You can find the reference in Combinatorial Algorithms For Computers and Calculators. Albert Nijenhuis and Herbert S. Wilf. 2nd Edition. Academic Press. (I'll try to make this post as self-contained as I can).

First, I'm quite convinced to have managed to implement the ranrut procedure so that each rooted unlabelled tree is generated uar. However, I'm having some problems with the algorithm to generate free unlabelled trees (here) and I was hoping that you could help me. In this post I would like to ask two questions.

I have one problem with language. Specifically, with one particular word, which I do not understand in the context of the paper. The word is adjoined and appears in the Forest procedure, as seen highlighted in this image: 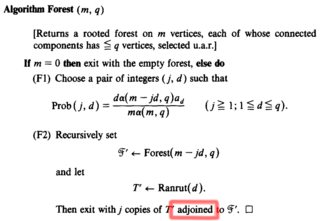 The image is an extract of Wilf's paper that shows the full procedure Forest. Now, the word adjoined is used in the sentence

Wilf says that, in order to generate uar a forest of $m$ trees, we first choose two integers $(j,d)$ with probability (as shown in the above image)

I have written an algorithm to correctly calculate $a_n$. I know it is correct because I can compare the values obtained with its integer sequence.

I hope to have made my doubts understandable and the questions clear.

Thanks to you all for your time.

Edit This post was motivated because my implementation of this algorithm did not generate trees uniformly at random. In my desperation I came here for help. Although the questions above still stand (because the implementation of the above might still be wrong), one of the "bugs" was caused by an error in Wilf's paper. My advisor pointed me to this document (Graph theory package for Giac/Xcas - Reference Manual, September 2018) where this error is mentioned and corrected (page 38, footnote 1.1). For the sake of self-containment, I tell you here what the error is and how it has been corrected. The Free procedure that Wilf defines in this paper, says that in order to generate an $n$-vertex free tree u.a.r. you have to generate a bicentroidal tree with probability $p$, or a random forest of $n-1$ vertices with probability $1-p$ (the roots of this forest are connected to a new vertex). Wilf says that $$p ={1 + a_{n/2} \choose 2}/a_n$$ where $a_n$ is the number of rooted unlabelled trees of $n$ vertices. As pointed out in the cited document in this edit, the denominator is wrong. Instead of $a_n$, it should be $f_n$, the number of unlabelled free trees on $n$ vertices.

Thanks to the effort of several people, I got the answers I was looking for. I write this so that other people in the future can have a direct answer to the questions above without having to read the comments.

Thanks to everyone who helped in finding the answers to my questions, even to those who did not answer them directly. I really appreciate your help.

Not the answer you're looking for? Browse other questions tagged co.combinatorics graph-theory algorithms trees algorithmic-randomness or ask your own question.

11
Is there a simple inductive procedure for generating labeled trees uniformly at random, without direct recourse to Prüfer sequences?
3
How random are random spanning trees?
6
The structure of small components in random graphs with a given degree sequence
14
Generating Random Young Tableaux: A peculiar probability identity
4
The number of monotone full binary trees
7
Combinatorial interpretation of series reversion coefficients
7
Bound on queries to a tree with unusual probabilities
3
Typical labelled vs. unlabelled trees properties
Question feed