This is a very elementary topic but I thought it might be worth giving it a try here, I would be very interested in any comments - I originally posted it to Maths SE.

Euler's Rotation Theorem, proved by Euler [1] in 1775, is an important theorem in the study of general 3D motion of rigid bodies, as well as an early example of a fixed point theorem in mathematics. It states that given an arbitrary motion of a sphere about its center, there exists a diameter of the sphere (the 'Euler Axis') and axial rotation about it which produces the same net displacement.

Euler's original proof [1, sections 24-28] makes use of spherical 'non-Euclidean' geometry, for example spherical triangles, and is discussed in [2] and [3].

What other methods of proof exist, which require only elementary Euclidean geometry, and are purely geometric, not requiring any algebra or matrix theory ?

Two geometric proofs are given below. Both proofs start off as in Euler's proof, by considering the image $C_{2}$ of a great circle $C_{1}$ under the motion. In proof (1) this is used to construct a non-great circle which must be mapped onto itself due to a certain orientation property that is preserved - the axis of that circle is then the Euler Axis. In proof (2) it is shown the final displacement of the great circle can be achieved via a composition of two $ 180^\circ $ axial rotations which then gives the Euler Axis as the normal to the plane containing these two axes. For a non-zero motion the Euler Axis must be unique since it implies there exist exactly two fixed points, namely its endpoints - with all the other points rotated by a common angle not a multiple of $ 360^\circ $.

The lemmas cover the simple special cases and define the notion of 'orientation' used in Proof (1).

A motion of a sphere about its center $O$ which leaves a point $P$ on the sphere fixed is equivalent to an axial rotation about $OP$. Hence the antipode $P'$ of $P$ is fixed also, and if the motion is non-zero $P$ and $ P' $ are the only fixed points.

There are no possible final positions of the sphere in which $ P $ is fixed, other than axial rotations about $ OP $ from the original position, since with $ P $ fixed the situation of the sphere is constrained from every other possible motion. The antipode $ P' $ is the opposite end of this axis and hence is fixed also. For a non-zero motion the angle of axial rotation cannot be a multiple of $ 360^\circ $, thus ALL points other than $ P $ and $ P' $ must be moved.

A motion of a sphere about its center $ O $ which overlays a circle $ C $ (great or non-great) onto itself in some manner is equivalent to an axial rotation.

(i) If $ C $ is non-great then as in Lemma 1 the sphere is constrained so no net displacement other than a rotation about the circle's axis is possible.

(a) overlayed the 'same way up', in which case the same argument as (i) applies, or 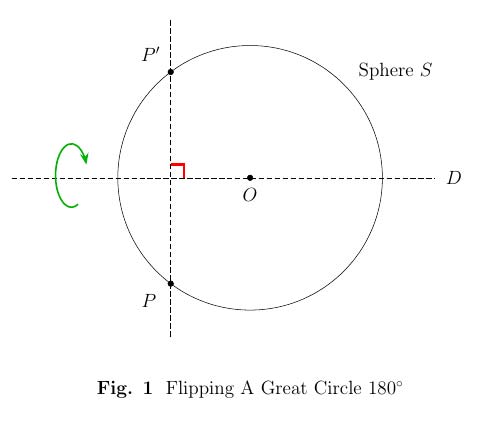 Any motion of a sphere about its center $ O $ in which a diameter is flipped is equivalent to a $ 180^\circ $ axial rotation.

This causes the great circle of the diameter to be flipped over onto itself, and thus by Lemma 3 case (ii)(b), the result follows. 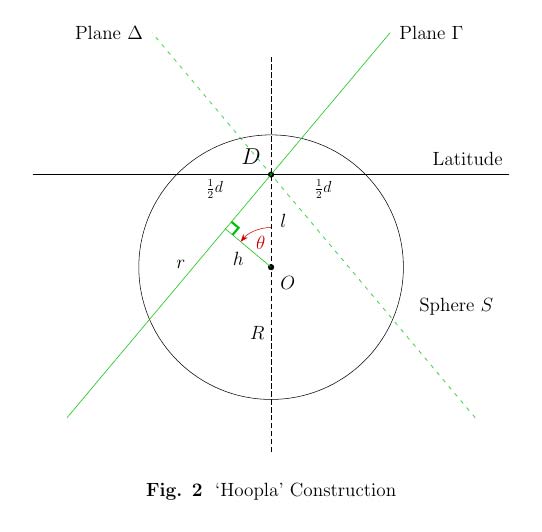 Center $O$ of sphere never crosses or touches the plane of circle $C$, so circle $C$ is always being viewed from the same side, and so as $A, B$ are fixed onto $C$, their orientation on $C$ remains the same.

If two non-diametrical points $A, B$ on a sphere $S$ of radius $ R $ lie on two distinct circles of common radius $ r $ on the sphere, then $A, B$ (viewed from non-$O$ side) have opposite orientations on these respective circles.

From Lemma 5, the two distinct circles of same radius implies case (iii), so the circles are non-great.

The case $ L = M $ is trivial as the composition is a zero motion. 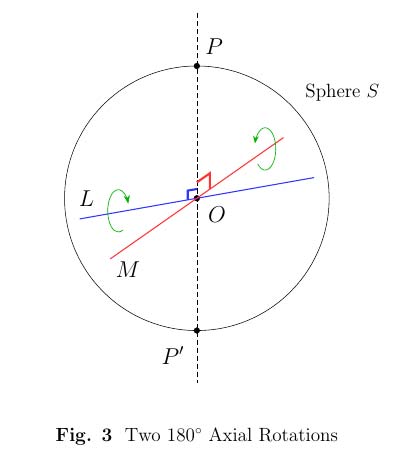 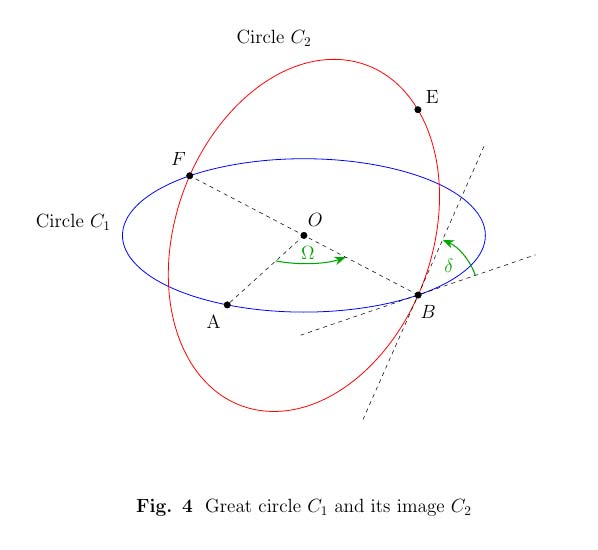 because the non-diametrical equal length chords $AB$ and $BE$ of $C$ subtend the same angle within $C$, and these chords lie to either side of point $B$ by virtue of $A \neq E$.

And secondly, considering the rigid motion taking $C$ to $ D $ : 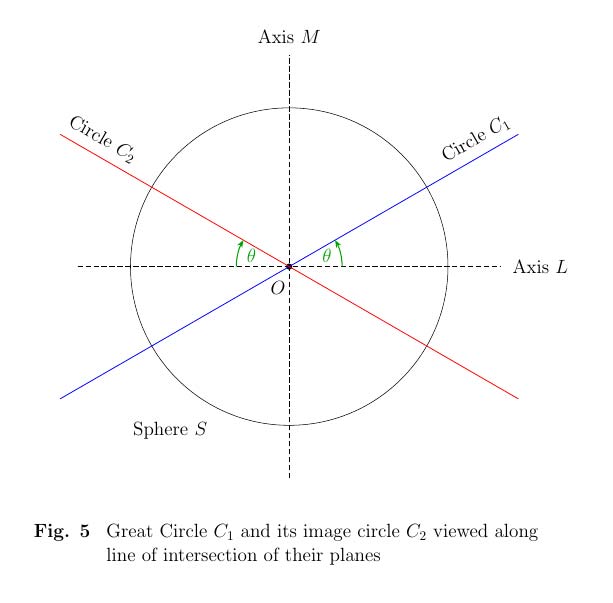 Thus we have achieved the correct final position for $C_{1}$ by a succession of two $ 180^\circ $ axial rotations, and thus by Lemma 8 and Lemma 2 the proof follows.

How is the standard proof non-elementary? You take an arbitrary point $V$ in the unit sphere and look at its image $V'$. You then compose your rotation $A$ with the reflection $R_1$ with respect to the plane orthogonal to the line $(V'V)$ and passing through the origin $O$; clearly the composition maps $V$ back to $V$. Therefore, the composition must preserve the plane through the origin orthogonal to $V$.

You now take an arbitrary point $W$ in that plane, look at its image $W'$ under the composition, and compose $R_1\circ A$ with the reflection $R_2$ w. r. t. plane orthogonal to $(W;W')$ and passing through the origin. That plane contains $V$, therefore $R_2\circ R_1\circ A$ preserves both $V$ and $W$; and hence the set of the (two) vectors in the sphere orthogonal to both.

You take one of these vectors $U$ and look at its image $U'$ and compose everything with another reflection... we get that $R_3\circ R_2\circ R_1\circ A$ preserves the mutually orthogonal points $U$, $W$ and $V$. Therefore, it preserves distances to $U$, $W$ and $V$. But these distances uniquely determine a point in the sphere, for the set of points in the sphere at a certain distance, e. g., from $U$ is a circle lying in the plane orthogonal to $OU$, and an intersection of three such planes contains just one point.

Arguably, the by-product - that any rotation is a composition of two reflections - is also of fundamental importance, and generalizes straightforwardly to any dimension.

Assume that the sphere has radius $R\neq 0$ with centre $O$. Denote the image of a point $P$ on the sphere under the motion by $P'$.

The assumptions we are making about the sphere motion is that it preserves distances between sphere points and if we take a triangle that does not lie along a great circle (i.e. it is not in a plane passing through the sphere centre) then it's orientation relative to a vector from $O$ to the triangle centroid does not change under the transformation.

We can now take the intersection of the two distinct planes $A^*$ and $B^*$ which consists of a line, L, passing through the sphere centre intersecting it in 2 antipodal points, $N$ and $S$. Since the sphere motion preserves distances between points the image $N'$ of $N$ must be equidistant from $A$ and $A'$ since $N$ was and also it must be equidistant from $B$ and $B'$. This is equivalent to it lying on the planes $A^*$ and $B^*$ and hence on their intersection. Therefore either $N'=S$ (and $S'= N$) or $N'=N$ (and $S'=S$). But the two directed arcs $AB$ and $A'B'$ of equal length can be moved into coincidence by a rotation about $NS$. (This was the point of the construction and is obvious since we can drop equal length perpendiculars from $A$ and $A'$ to a common point $A_p$ on $NS$ since all points of $NS$ are equidistant from $A$ and $A'$ by construction. Similarly for $B$ and $B'$ to point $B_p$. The two planes containing $AA_pA'$ and $BB_pB'$ are perpendicular to $NS$ hence parallel. Bringing the two planes into coincidence by translating along NS we can see that $|AB|=|A'B'|$ implies that the directed angle $\angle AA_pA'$ equals the directed angle $\angle BB_pB'$ and hence a rotation by this angle about $NS$ takes the directed arc $AB$ into $A'B'$ ). This means that the triangles $NAB$ and $NA'B'$ have the same orientation but $NAB$ and $SA'B'$ do not. Hence the sphere motion will reverse orientation if $N'=S$ so this cannot be true and both $N$ and $S$ must be fixed under the motion.

Hence we can now assume that the sphere motion itself has 2 antipodal fixed points and we now show this means it must be a rotation. We can complete this with 2 different arguments:

Argument 1) If we have an additional fixed point to the 2 antipodal points then any point on the sphere can be categorised uniquely by it's distance to these three points up to a reflection in the plane $F$ through $O$ containing them. Hence a given point either stays fixed or is reflected in this plane. Take a point $M$ not on $F$. Then if $M$ stays fixed then it's reflection $M_r$ does as well. Take an arbitrary point $X$ not on $F$. Then we have $|XM|=|X'M|$ and $|XM_r|=|X'M_r|$ and hence $X'$ cannot be the reflection of $X$. Hence either all points stay fixed or they are all reflected in $F$. However a reflection is not orientation preserving so the sphere motion must be the identity.

Therefore we have only 2 antipodal fixed points. Since we have proved that any two sphere points can be mapped to any other 2 points spaced the same by a rotation about an axis passing through $O$ and there are only 2 fixed points all pairs of points can be rotated into their images about the same axis. If we take 2 arbitrary non-antipodal points $X$ and $Y$ on the sphere then the both must be rotated about this axis in exactly the same way to preserve the distance between them. Hence all points on the sphere are transformed by a common rotation about a common axis.

This proves that the sphere motion is a rotation about an axis passing through its centre.

Now take the great circle $H$ lying in the plane perpendicular to $NS$. Take distinct points $X$ and $Y$ on this circle. Since the sphere motion preserves distances between points and is orientation preserving we know that the triangles $NXY$ and $NX'Y'$ must be congruent and oriented in the same sense which implies that $Y$ is rotated about $NS$ identically to $X$ and hence this circle is mapped to itself under a rotation about $NS$.

Since each great circle passing through $N$ and $S$ shares a point with $H$ they all must rotate about $NS$ as $H$ does.

This proves that the sphere motion is a rotation about an axis passing through its centre.

Not the answer you're looking for? Browse other questions tagged mg.metric-geometry euclidean-geometry alternative-proof or ask your own question.

35
What are some proofs of Godel's Theorem which are *essentially different* from the original proof?
10
Defining Euler's number via elementary euclidean geometry (and a dimension limit)
Question feed