Do mixing homeomorphisms on continua have positive entropy?

I am trying to understand relations between various measures of topological complexity. I have read that expansive homeomorphisms on continua, for example, have positive entropy. But I do not know whether another property called mixing also implies positive entropy.

Question. If a homeomorphism $f:X\to X$ is mixing, then does $f$ necessarily have positive entropy?

See https://en.wikipedia.org/wiki/Topological_entropy for the two equivalent definitions of the topological entropy of a map $f:X\to X$.

EDIT: It occurs to me that my question was essentially asked in:

Question 6 in that paper is my question with a weaker hypothesis (it is not difficult to show that mixing implies sensitive dependence on initial conditions).

I'm not sure if anyone ever published a counterexample.

I realized there is a simpler construction that achieves the same (examples of top. mixing zero-entropy homeos on $S^3$): Instead of the bi-directional flow through cuboids, have a flow from bottom to top on the cylinder $D^2 \times [0,1]$, and have it slow down to rate $0$ on the boundary. Also, instead of all the $C_i$ playing the same role, have a single special cylinder $C$ and to get mixing, thread small cylinders from its top to its bottom, making sure at all times not to introduce periods (by refining open sets similarly as in the construction below). Open sets in the existing gadget will go around these loops and a little part of them eventually ends up on a free area on the top of $C$, and you do the threading from there. (And threading through open sets not in the gadget is easy.) The details of making the flow continuous in the limit, and the calculations showing that slow enough rate in the new cylinders implies zero entropy, are the same (and I still didn't do them).

I think there are counterexamples on all path-connected closed manifolds of dimension at least $3$, or at least I don't know what special properties I could possibly be using. For concreteness, we can think about $M = S^3$. I'll describe an $\mathbb{R}$-flow whose time-$1$ map will have the desired property. Some figures I drew on the blackboard are also attached ($U_1$ and $V_1$ in the figure should be $U_2$ and $V_2$ resp.). 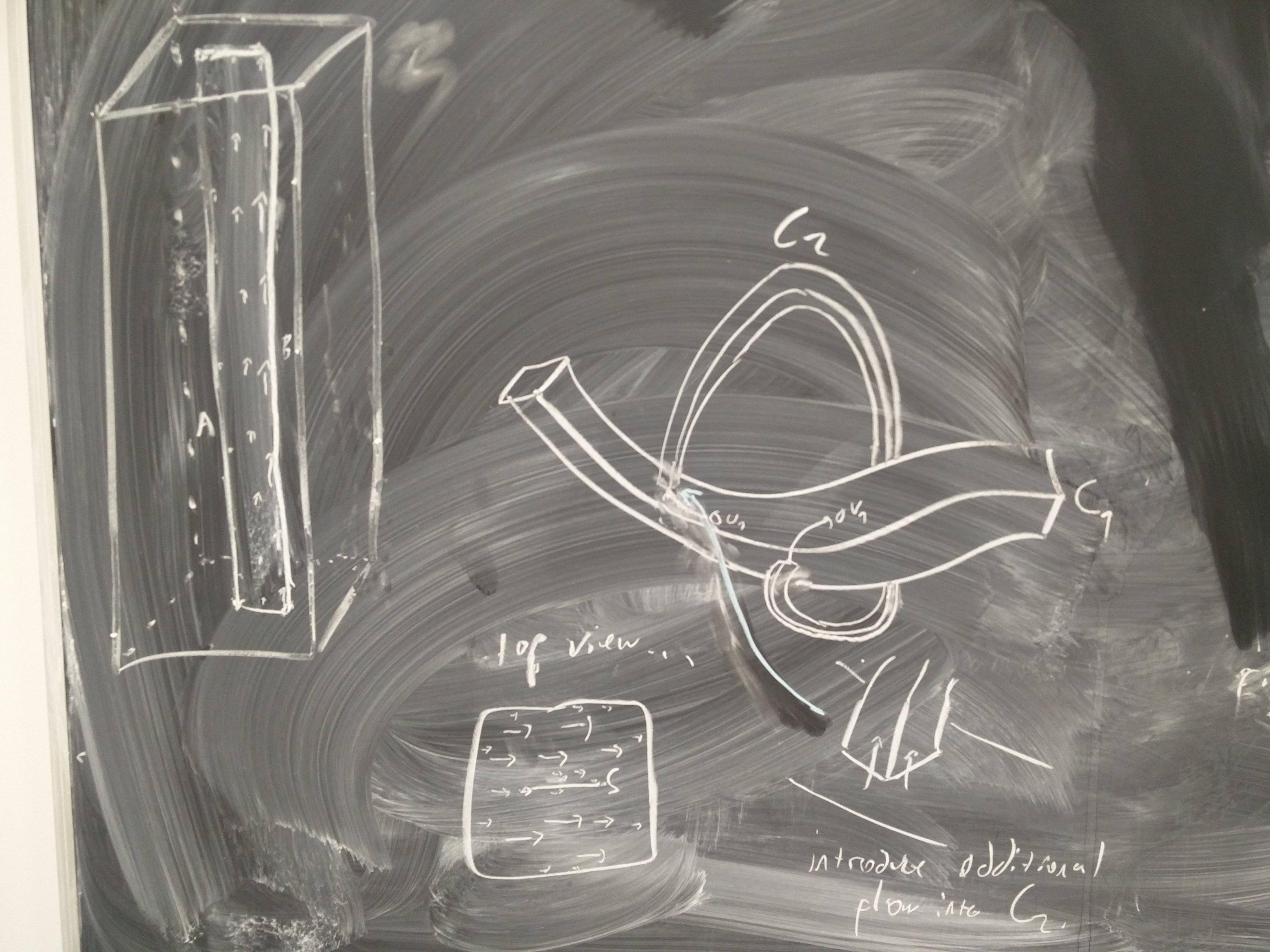 Outside $S$, the vertical movement quickly dies off, and turns into horizontal movement parallel to the strip $S$, so that if $A$ is on the left and $B$ on the right, the dynamics moves points say from left to right, so that the closer they are to $S$, the slower they go (and very close they also shift up). We want to introduce some horizontal movement immediately after leaving $S$, so that all points close to $S$ but not on its affine hull will eventually reach the right boundary of $C$. (On the affine hull of $S$ you have to stop movement altogether when you hit $S$.)

The point is now that if you go into (properly inside) $C$ from the bottom, somewhere between the bottom points of $A$ and $B$, then you walk up $C$, and you can control how long it takes to reach the top from the bottom of $C$. (Of course the bottom and top have no flow because they are on the boundary, so this is indeed only true if you step properly inside $C$, but that'll change later when we start embedding copies of this in $M$.)

We need some niceness properties from the flow, which we call the splotch properties, because they describe how the dynamics splotches open sets to the boundary of $C$. If you take an open set inside $C$, then we want that almost all points (all but the ones in the two-dimensional affine hull of $S$) will eventually stop moving vertically and start tending towards the right side of $C$. We want that the limit of these points on the right boundary contains a relative open set, i.e. as the open set is squeezed to the right side, the splotch you get in the $\omega$-limit always contains a square (homeomorphic copy of $[0,1]^2$). For the inverse dynamics, we want the same to happen on the left. Assuming far enough from $S$ there is no vertical movement whatsoever, this should be more or less automatic, I didn't write any formulas though. Another thing we need that if $U$ tends to the splotch $U^+$ on the right hand side and we pick a small square $D$ inside $U^+$, then some small open ball inside $U$ has its splotch ($\omega$-limit) contained in $D$.

Now, having $f_{\epsilon} : \mathbb{R} \times C \to C$ with these properties, let's think of $C$ as very flexible and as carrying the dynamics of $f_{\epsilon}$. So when I stretch $C$ around the manifold $M$, the conjugate dynamics follows along.

Now, we continue the construction process. We have some $U_2$ and $V_2$, and want to do the same for them. If they are disjoint from $C_1$, then this can be done in exactly the same way, and if they are not entirely inside $C_1$ they can be refined to be completely disjoint from $C_1$. So consider the case where one or both are inside $C_1$; suppose for concreteness that both are inside $C_1$. Follow the dynamics forward from $U_2$. It travels according to the flow of $C_1$ until most of it gets very close to the side of $C_1$ that corresponds to the right side of $C$, and it tends to some splotch $U_2^+$ in the $\omega$-limit. Follow it also backward to obtain an $\alpha$-limit $U_2^-$ on the left side. Then do the same for $V_2$ to get $V_2^+$ and $V_2^-$. Now, it's possible that $U_2^+$ and $V_2^+$ intersect, then refine these sets to be smaller so that they don't, using the splotch properties. Do the same in the backward direction.

Now, the idea is to continue by induction, keeping roughly the following characteristic: we have in $M$ a finite set of very thin elongated blocks $C_i$. Outside the sets $C_i$, there is no movement, and on $C_i$ points move according to $f_{\epsilon_i}$, with $\epsilon_i$ tending to $0$ very fast, plus some linking behavior at their common boundaries. Every point that is not on (a set correspond to) the affine hull a copy of $S$ in some $C_i$ will eventually tend to the boundary of their union, so in particular every open set will contain an open ball which has such movement and a well-defined connected splotch as its $\omega$-limit. To get the next step of the construction, for $U_{i+1}, V_{i+1}$ again follow their forward and backward iterates until you hit splotches on some boundaries (the sets may split finitely many times as you travel between the sets $C_j$, but just refine them; againmake sure $U_{i+1}^+ \cap V_{i+1}^+ = \emptyset$ and $U_{i+1}^- \cap V_{i+1}^- = \emptyset$). Now drag a very thin copy of $C_{i+1}$ between these splotches. Observe that the existing $C_j$s don't disconnect $M$ (if you made them thin enough), so it is indeed possible to position $C_{i+1}$ this way. Finally add a bit of additional flow to connect the dynamics of $C_{i+1}$ to whereever you glued them on the boundary of $\bigcup_{j = 1}^i C_j$. Observe that no periodic points are introduced at any finite level.

Now, take the pointwise limit of these flows as $i \rightarrow \infty$, say $g$. This should tend to a flow assuming $\epsilon_i$ tends to zero fast enough, and everything is regular enough, and all the added $C_i$s are small enough and so on. Just do the math and you'll see (obviously I haven't done it or I'd show it).

On the other hand, if $\epsilon_i$ goes to zero very fast, clearly there is no entropy. This is true on finite levels of the construction just because every point has singleton limit sets. To get it for $g$, do the calculations, make sure not to introduce too many new partial orbits with respect to any fixed resolution $\epsilon > 0$ at finite steps.

The simplest counterexample would be the identity map on a one-point space.

7
When does a homeomorphism split into essentially minimal homeomorphisms?
12
Which topological spaces are coset spaces of locally compact groups?
2
Is there a minimal, topologically mixing but not positively expansive dynamical system?
1
Computation of metric Entropy by another metric which is induced by a homeomorphism
2
Automorphism of algebras with certain initial conditions on given idempotents
11
Why are homeomorphism groups important?
3
Positive Borel measure with empty support on a standard measurable space
9
Group of surface homeomorphisms is locally path-connected
2
For which continua $X$ does $X^\mathbb{N}$ have the fixed-point property?
Question feed